The Kitchener Rangers are proud to announce that goaltender Jacob Ingham has been named the 2019-20 recipient of the Dan Snyder Memorial Trophy awarded to the OHL Humanitarian of the Year, presented by Kia.

Ingham is the second player in franchise history since Ben Fanelli (2012-13) to be recognized with the award.

“I want to express my gratitude for the honour of being named the OHL’s Humanitarian of the Year,” said Ingham. “I am proud to play a small part in the incredible community response to supporting the need for blood in Ontario and throughout Canada.”

“Thank you to the Kitchener Rangers organization and the greatest fans in the OHL for all their support,” he added. “I also want to send a sincere thank you to Hockey Gives Blood, Canadian Blood Services, and the Brons family for all their inspiration over the last two years. As a hockey community, we can make a difference.”

Inspired by his grandparents’ need for blood donations following a car accident in August 2018, Ingham spearheaded a movement that has inspired the hockey community to become more involved in donating blood and stem cells in support of Hockey Gives Blood and Canadian Blood Services.

With those efforts, he became the very first Player Ambassador for Hockey Gives Blood and subsequently received the inaugural Dayna Brons Honorary Award for his contributions.

Continuing his Jake Saves campaign this season, the Ingham family donated $5 for every save. He also approached the Rangers to get involved and the team offered to match the family’s donation for a total of $10 for each save. With 1,501 saves and some additional donations secured by Ingham, the program raised $26,010 in 2019-20.

Ingham, who wears the number 68 (6-Give, 8-Blood), also organized a 68 Day Blood Drive that resulted in 40 blood donations between January 24th and March 31st. He also made an appearance at the local Canadian Blood Services location to encourage donations. Through his influence both in the community and over social media, 14 Canadian Hockey League players followed in becoming Hockey Gives Blood Player Ambassadors throughout the course of the season. 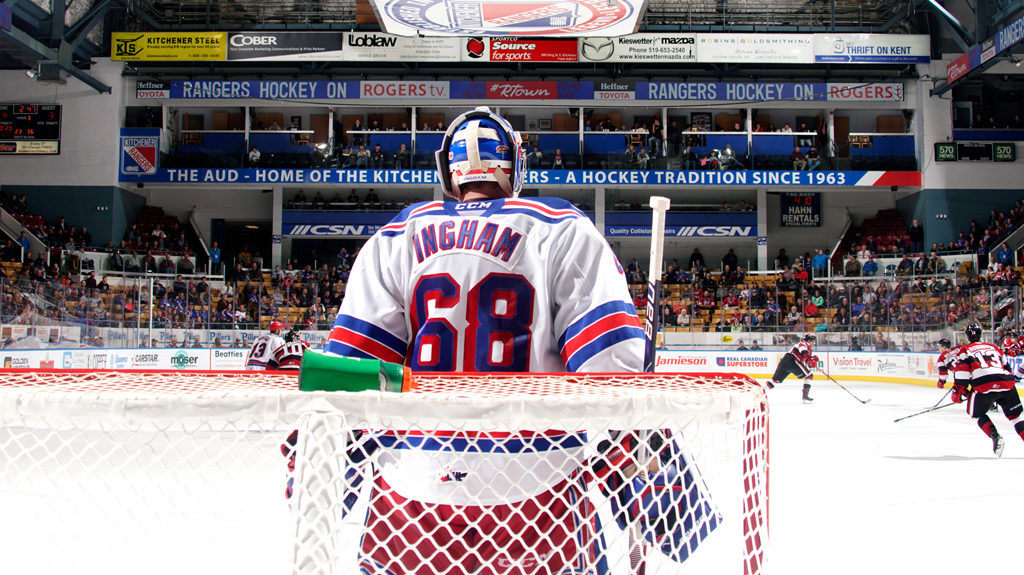 “Jacob is an extremely deserving recipient of this award and we are very proud of him,” said Rangers general manager Mike McKenzie. “It was impressive to see him have such an impact off the ice and in the community. He put in a lot of time and effort throughout the year and it’s great to see him get recognized and rewarded for it.”

Ingham’s charitable spirit was also evident in his regular provision of signed memorabilia for community fundraising events, his frequent presence at Rangers community appearances and autograph sessions, Read with the Rangers events at local schools and hospital visits in support of Clarky’s Kids – the Rangers’ program for children undergoing cancer treatment. Even in his spare time, Ingham was in constant contact with the team’s front office, actively pitching new ideas to shed further light on the importance of blood and stem cell donation. 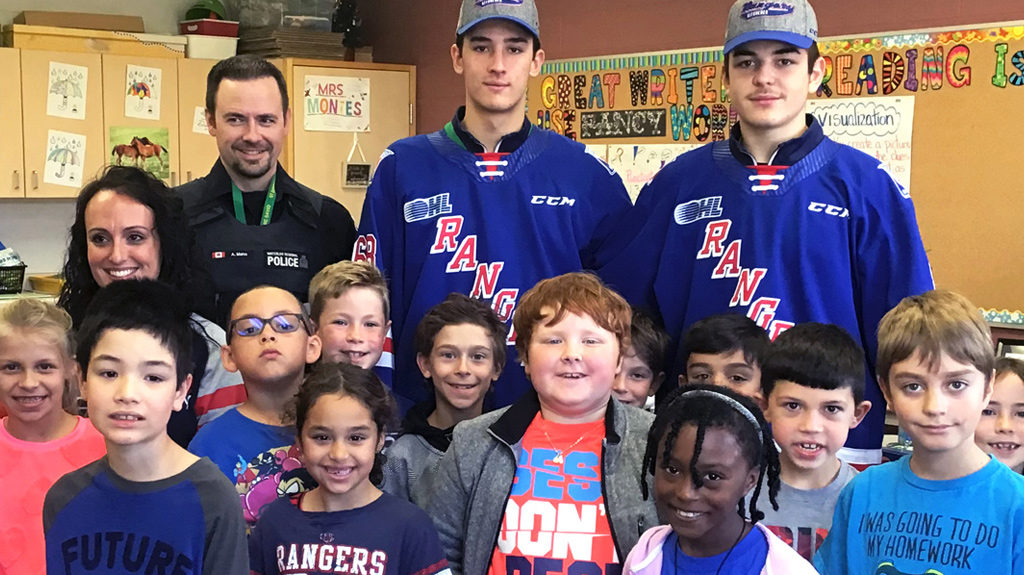 “The Kia Humanitarian of the Year award is a recognition of players who have devoted their time to the communities they represent,” said Michael Kopke, Director of Marketing at Kia Canada. “We would like to congratulate Jacob Ingham for winning the OHL Kia Humanitarian of the Year award. Kia Canada is committed to Powering the Future of Hockey and is honoured to acknowledge and reward players like Jacob who display their commitment to the community.”

The 19-year-old from Barrie, ON native was the team’s backbone on the ice, leading the OHL in wins (33) and saves (1,501) while posting a 2.96 goals-against average, .917 save percentage and two shutouts in 46 games played. Ingham earned the Rangers’ Ted Scharf Humanitarian Award, the Jim Malleck Memorial Trophy as the club’s Most Valuable Player before signing a three-year entry-level NHL contract with the Los Angeles Kings, who selected him in the sixth round of the 2018 NHL Draft.

The 6-foot-4, 198-pound goaltender owns a career OHL record of 93-61-9-8 with a 3.23 goals-against average, .899 save percentage and five shutouts over 177 regular season games spent between Kitchener and Mississauga.

“The difference that Jacob has helped make in the lives of patients across the country since joining the Hockey Gives Blood movement and Canada’s Lifeline has quite literally been game-changing. His significant fundraising achievements and efforts to mobilize the hockey community to donate blood and stem cells will have a huge and lasting impact for patients who rely on these life essentials,” said Canadian Blood Services CEO Dr. Graham Sher. 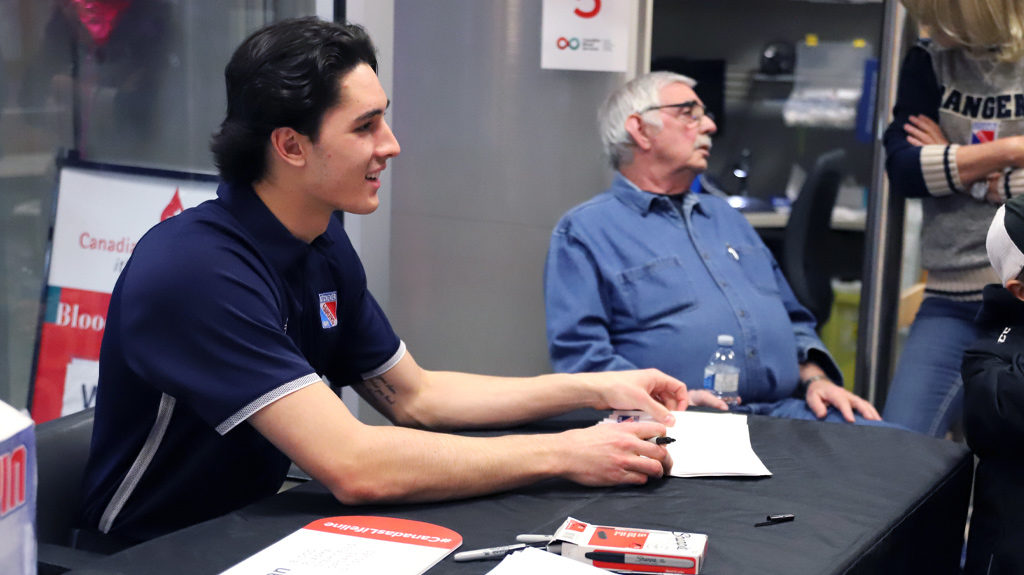 “Jacob’s commitment to patients has made him an inspiring role model within the Canadian Hockey League and we are so grateful to see how his efforts have started a lifesaving domino effect among his fellow players and hockey community. Congratulations on this very well-deserved honour, Jacob – keep making saves and saving lives!”

Stu Middleton, President of Hockey Gives Blood, commented on how “Jacob has far exceeded the basic responsibility we all share and has inspired both young and old to be better people and better citizens.”

“We appreciate the OHL taking the time to recognize Jacob Ingham for the work he has done this past season. The acknowledgement of peer influencers and community advocates like Jacob is essential to the sustainability of volunteerism nationwide.”

“We continue to wish Jacob the best of luck in the next chapter of his career and congratulate him on winning the Ontario Hockey League Humanitarian of the Year.”

Each year the OHL awards a player that has demonstrated outstanding qualities as a positive role model in the community with the Dan Snyder Memorial Trophy. The Ontario Hockey League Board of Governors announced in 2004 that the OHL Humanitarian of the Year award would be renamed in recognition of the former Owen Sound Platers captain, who was twice named his team’s Humanitarian of the Year in recognition of his tremendous efforts in supporting community activities.

Ingham will be the OHL’s nominee for the Canadian Hockey League Humanitarian of the Year Award to be announced in the coming weeks.