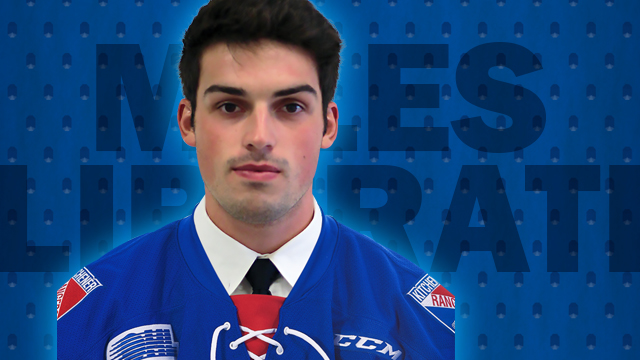 “We looked at our team’s needs, and we liked the offensive upside from the backend that Miles offers to a club,” said Hiebert.

“From his strong skating, to his ability to move the puck Miles was a player at the top of our list in terms of someone we felt could help us. We think he’ll be a tremendous fit both on and off the ice with the core group we have established here. Miles has a clear ability to create plays and generate offence, and that was certainly something we were looking for.”

In 24 games played this season, Liberati has tallied eight goals and eight assists for 16 points. He is coming off a career best season in 2014-15 which saw him register 11 goals and 27 assists for 38 points.

Originally drafted by the London Knights in the third round, 55th overall in the 2011 OHL Priority Selection from the Pittsburgh Vipers (NAPHL) Under-16 team, he played 74 career games – including playoffs – with the Knights, and was a member of the OHL championship winning squad in 2013 who went on to compete in the 2013 Mastercard Memorial Cup in Saskatoon, SK.

He was selected by the Vancouver Canucks in the seventh round, 205th overall in the 2013 NHL Entry Draft.

He was traded from the Knights to the Battalion on November 19, 2013 in exchange for defenceman Zach Bell.

Liberati has registered a total of 31 goals and 42 assists for 73 points and a plus-21 rating with 109 PIM over 197 career regular season games played over four-plus seasons with the Knights and Battalion.