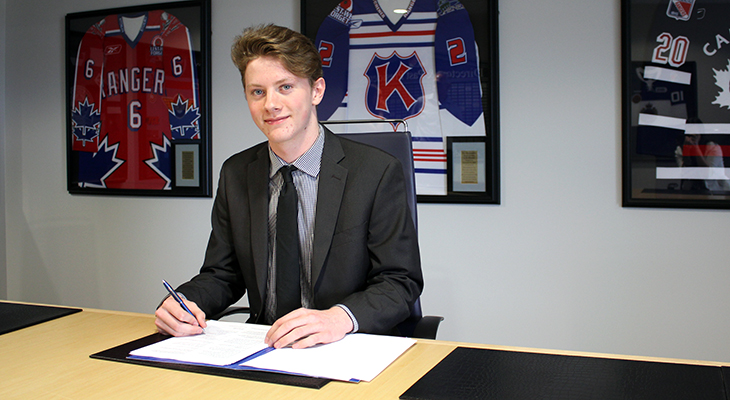 The Kitchener Rangers announced today that forward Matt Gordon has committed to an Ontario Hockey League standard player agreement with the Club.

The third-round, 58th overall choice in the 2017 OHL Priority Selection was a member of the Guelph Gryphons during the 2016-17 season, registering 18 goals and 29 points in 34 games played.

The 6’0, 160lb centreman attended Rangers’ Spring Camp in April, and was a member of the silver-medal winning Team OMHA Black at the 2017 OHL Gold Cup earlier this month in Kitchener.  He finished the weekend with a goal and three points in five tournament games played.

“Matt had an impressive performance at the OHL Gold Cup and played a large role in his team making it to the Finals,” said Rangers’ general manager Mike McKenzie. “His speed and skill were on display the whole week, and his strong play against the other top 2001-born players in Ontario just added to our excitement of being able to select him in the Draft.

“We’re proud to have Matt and his family commit to the Rangers today, and look forward to seeing him develop as a player.”