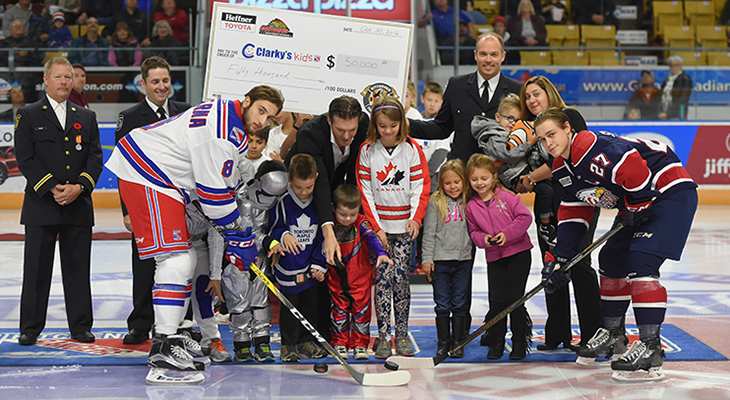 The Kitchener Rangers would like to acknowledge the fundraising efforts and generous donations to Clarky’s Kids, which has now surpassed $620,000 in donations since its inception just eight years ago.

David’s goodwill and generosity has inspired numerous others in Waterloo Region, and has allowed the program to reach the tremendous level of success it has in its brief existence.

“During my playing days in Kitchener, I lost my Grandmother,” Clarkson recalled. “She was very sick and in the hospital, but just before she passed, she said, ‘If you can ever help others and do things for people, you should do that.’. It was the last conversation we ever had.

“When I made it to the NHL, I phoned Michelle with the intent of starting something to give back to the community. I wanted it to be affiliated through the Rangers because there’s just no better organization. This city, and this program, are very dear to my heart.

“When you play here, the community makes you feel like one of their own,” Clarkson added. “That always meant a lot to me, so I wanted to keep that relationship going.”

Michelle Fortin, Manager of Brand Marketing for the Kitchener Rangers, helped create Clarky’s Kids with Clarkson and assists with continuing to ensure the program runs smoothly.

“Michelle has been so amazing since the very beginning,” said Clarkson. “She makes it easy for me to stay involved, even from afar.”

“I’m thrilled to see how much this program has grown since its launch,” said Fortin. “I remember the first discussion I had with David about this initiative. He was passionate about our community then, and is even more passionate about the work we do now.”

The Kitchener Rangers’ Clarky’s Kids program provides special event opportunities and financial assistance to local families of children ranging in age from infant to 16-years-old dealing with cancer. The program has raised $621,518 to date.

“Clarky’s Kids is about more than just raising funds and awareness for childhood cancer patients and their families,” Fortin added. “David and other former and current Rangers’ players build friendships with amazing children and their families that have lasted – and will last – for many years.”

“The program also means a lot to my Mom,” Clarkson added, “who, along with my Dad and sister, now call Kitchener home. My Mom will go to the hospital and visit, and I won’t even know. She does it on her own because the program is something that means a great deal to her, as well.”

Clarkson and the Rangers’ organization founded Clarky’s Kids in order to not only help families ease some of the financial burden that comes with caring for a sick child, but also aims to brighten the days of those families by giving them a distraction and a fond memory together.

Private suite donations by the Rangers to individual families allows them to have a night out and, if just for a few hours, think about something other than the stresses and worries of the situation at hand. In the eight years, the Rangers have donated over $120,000 in suite nights to Clarky’s Kids.

“I have always cared a lot about Clarky’s Kids, but when I had kids of my own, that passion grew,” said Clarkson. “You start to think about what those parents must go through, and how difficult it would be to see your own child have to endure something like that. It just hits you in a very different way.”

The contributions of Clarkson and his family to Clarky’s Kids over the years have been overwhelming, but without the generosity of countless individuals and businesses in our community, reaching this fundraising milestone would not have been possible.

The Kitchener Rangers organization would like to acknowledge and sincerely thank all those who have made a donation to the Clarky’s Kids program over the last eight years.

For more information on how you can donate, please visit kitchenerrangers.com.