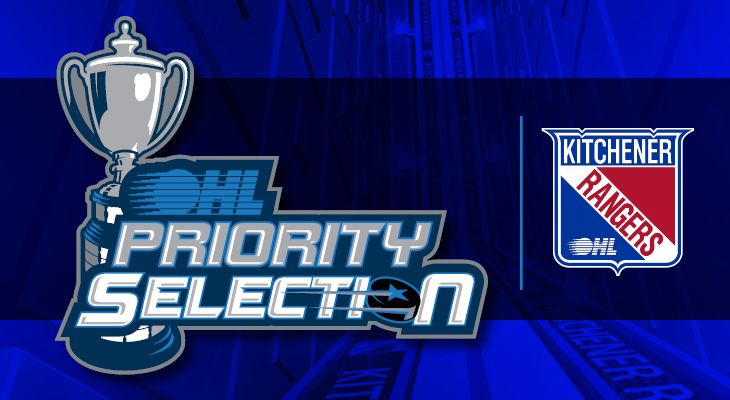 The Kitchener Rangers made a total of 14 selections on Saturday during the 2017 OHL Priority Selection.

With their first round selection, 13th overall, the Rangers chose defenceman Grayson Ladd of the Chatham-Kent Cyclones.

The 6’2, 160lb Dresden, Ontario native played just 26 games in an injury-shortened season with the Cyclones in 2016-17, but was high on the list of potential prospects for Rangers’ general manager Mike McKenzie and his staff.

“Grayson was a guy that we coveted very highly,” said McKenzie, moments after the first round selection was made. “He missed a lot of time this year due to injury, so maybe team’s weren’t able to see him as much as they would have otherwise. He was a guy we really zoned in on. He’s got some great size and is a very smart player. He’s poised with the puck, and skating would certainly be one of his biggest attributes, as well.”

Below is a complete list of all the players chosen on Saturday:

For more information on the Rangers’ newest prospects, including draft day videos with management, scouts and players, visit the Kitchener Rangers’ draft page.