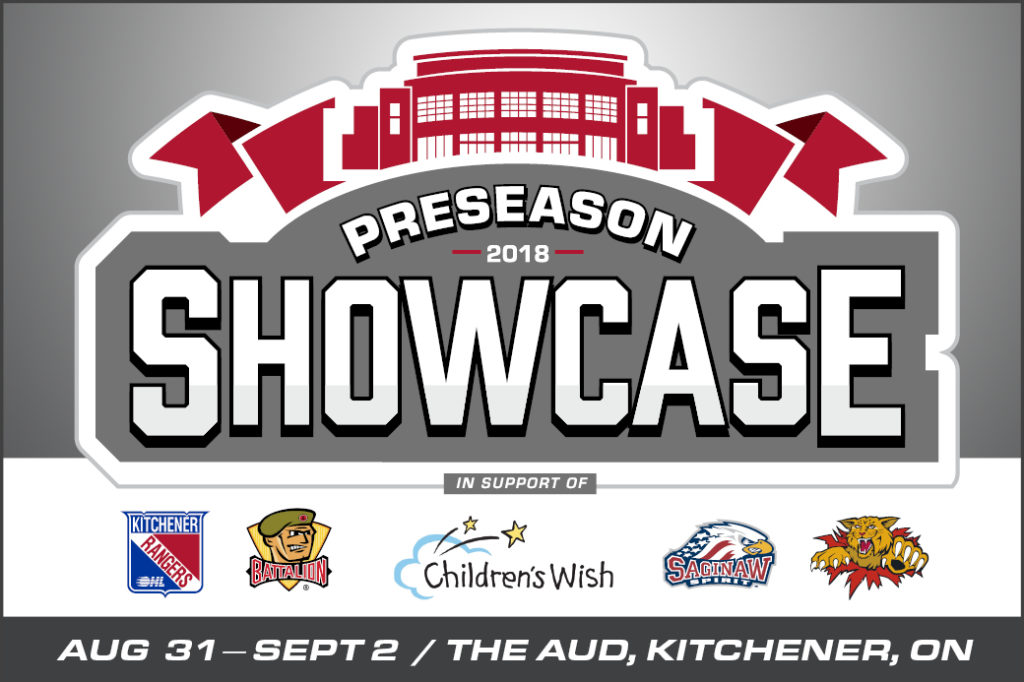 The Kitchener Rangers are pleased to announce they will host a Preseason Showcase at the Kitchener Memorial Auditorium from August 31 – September 2, 2018. Along with the Rangers, the Showcase will feature the North Bay Battalion and Saginaw Spirit, as well as the Quebec Major Junior Hockey League’s Moncton Wildcats.

All teams will meet over the course of the weekend, with three games per team for a total of six weekend games.

Tickets to the Preseason Showcase are $10 for a weekend pass which provides entry to all games, or $5 per game. Seating for the games will be general admission.

Tickets will also be available day of game at the door; cash only sales.

All proceeds will go to support the Children’s Wish Foundation.

“We are extremely excited to partner with Moncton, North Bay and Saginaw and kick off the 2018-2019 season by hosting our own Preseason Showcase,” said Rangers general manager Mike McKenzie.

“We really enjoyed our time in Buffalo last year at the HarborCenter OHL Showcase and thought this would be a great opportunity for our fans to have a similar experience, while also raising money for a great cause.

“All the games, combined with the annual Fan Fest and Barbecue on Sunday, will be a fun and exciting start to the season for the players participating and for Rangers Nation.”

The Rangers annual Fan Fest and Barbecue, also in support of the Children’s Wish Foundation, will take place on Sunday, September 2 starting at 10am prior to the Rangers’ final game of the Preseason Showcase at 2pm.

During Fan Fest, fans will have the opportunity to meet the Rangers players, enjoy a BBQ lunch and take part in a number of activities including inflatable games and rides.

The Sun Life Financial Kids In Gear program will also be accepting donations of new or gently used hockey equipment for youth in need in Waterloo Region.

The Rangers will also play two more exhibition games before the onset of the 2018-19 regular season, as they take on the Niagara IceDogs for a home-and-home beginning Friday, September 14 at The Aud at 7:30pm. The two teams head to St. Catharines the following night, Saturday, September 15, for a 7pm start to round out preseason play.