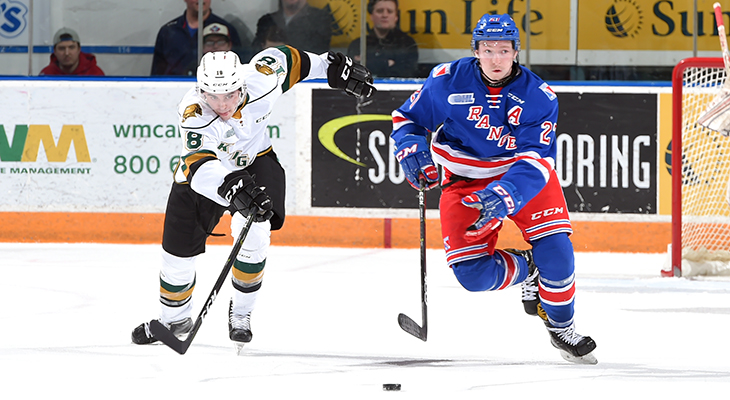 The Kitchener Rangers and their fans thought tonight was finally the night.

Instead, it turned into unlucky number 13.

The Rangers (34-24-2-2) jumped out to a 4-0 second period lead over the London Knights (41-12-3-4), but the visitors responded with five unanswered goals to rally for a 5-4 regulation win over the Blueshirts in front of 7,315 fans at the Kitchener Memorial Auditorium on Friday night.

It was the 13th consecutive meeting between the two teams in which the Knights have skated to victory, dating back to last year’s playoffs and regular season.

Tyler Parsons (18-4-2-3) returned to the London crease for the first time since February 4th after missing nine games due to injury. He appeared to have a shaky start, surrendering the first two goals on just ten shots, but was steady enough to backstop his team to victory with 22 saves.

Darby Llewellyn led the way offensively for the Rangers with a three-point night, tallying a pair of goals and an assist. Connor Bunnaman (1G, 1A) and Elijah Roberts (2A) each had multi-point efforts, while Greg Meireles was the other Rangers goal scorer.

Meireles gave the Rangers a 1-0 lead just over seven minutes into the game, beating Parsons glove-side at 7:18, from Andrew Burns and Roberts.

Before the period was out the Rangers would strike again, as Bunnaman tallied his 31st of the season, assisted by Llewellyn, to make it 2-0 at 16:56.

Shots on goal in the first period of play were 12-9, London.

Llewellyn buried his 21st of the campaign just 2:05 into the middle frame, unassisted, to extend the Kitchener lead to 3-0.

With a player aside whistled for roughing, the Rangers made it a 4-0 game while 4-on-4, as Llewellyn scored his second of the game, assisted by Bunnaman and Roberts at 14:17.

The final five minutes of the frame were heated as the crowd voiced their displeasure of non-calls, then with a high-sticking penalty to captain Frank Hora with 18 seconds left to play in the period.

To the ire of Rangers Nation the Knights would capitalize, snapping the shutout bid by Richardson with just 0.3 seconds remaining on the clock in the middle period, as Evan Bouchard made it 4-1 from Robert Thomas and Cliff Pu.

Shots on goal in the middle frame were 10-8 Kitchener for a two-period total of 21-19, London.

To the dismay of Rangers fans the power play goal by Bouchard seemed to ignite the Knights, as Victor Mete cut the London deficit to 4-2 at 4:27 of the third period, with the lone assist to Thomas.

With another power play opportunity the Knights would strike once more, making it a 4-3 game under two minutes later on a goal by JJ Piccinich, from Mete and Mitchell Stephens at 6:21.

Just six seconds later, the game was tied, as Sam Miletic made it 4-4 with his 31st of the season, from Mete and Stephens, at 6:27.

With just 40 seconds to play in regulation Pu tallied the game winner, his 31st of the season to give London its fifth unanswered goal and seal the comeback win.

Kitchener was 0-for-1 on the power play, while London was 2-for-4 with the man advantage.

The Rangers are back in action Sunday to wrap up four games in five-and-a-half days as they host David Miller and the Sault Ste. Marie Greyhounds for a 2pm start.