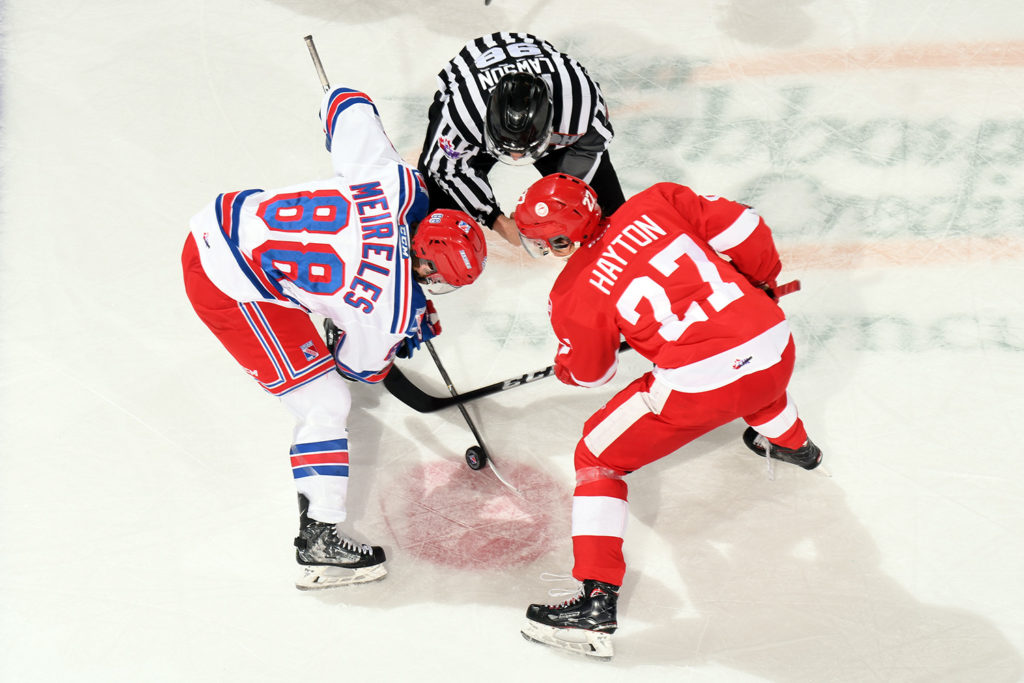 The Sault Ste. Marie Greyhounds seem to have a knack for pulling off improbable, last second victories over the Kitchener Rangers.

Conor Timmins scored the game winning goal off a draw in the Rangers end – with the Hounds shorthanded – with less than a second left to play in regulation as the hosts skated to a 3-2 win over the Blueshirts in front of a crowd of 4,722 at the Essar Centre in Game 1 on Friday night.

The Greyhounds lead the best-of-seven series, 1-0, with Game 2 scheduled for tomorrow night, Saturday, April 21 at 7:07pm at the Essar Centre.

It isn’t the first time this season the Greyhounds grew the ire of Rangers Nation with late game larceny, as Keeghan Howdeshell scored with 2.9 seconds remaining in a 3-3 game at The Aud on December 15.

The game winning goal by Timmins in Game 1 was the first time the Greyhounds led on the night, as the Rangers opened the scoring with a power play goal from Connor Bunnaman in the first period.

The Hounds evened things up at 1-1 before the period was out, but on their second power play opportunity they went 2-for-2 on the man advantage as Givani Smith gave the visitors a 2-1 edge at 8:03 of the middle frame.

The Rangers managed to maintain that lead for just four minutes, however, as Timmin’s first of the night tied the game, 2-2, as it would stay until his second goal of the night proved to be a buzzer beater to seal the Soo win.

Matthew Villalta picked up the win in goal for Sault Ste. Marie, surrendering a pair of goals on 20 shots.

Sault native Mario Culina made a number of quality saves on the night; 29 in total while allowing three but was saddled with the loss.

Bunnaman’s game-opening goal was a power play marker, assisted by Kole Sherwood and Adam Mascherin, at 10:29 of the first period.

Jack Kopacka evened things up, 1-1, with a power play goal for his team, from Tim Gettinger and Rasmus Sandin, at 16:50.

Taylor Raddysh and Morgan Frost earned the helpers on the game winner.

The Rangers were 2-for-4 on the power play, while the Greyhounds were 1-for-2 with the man advantage.