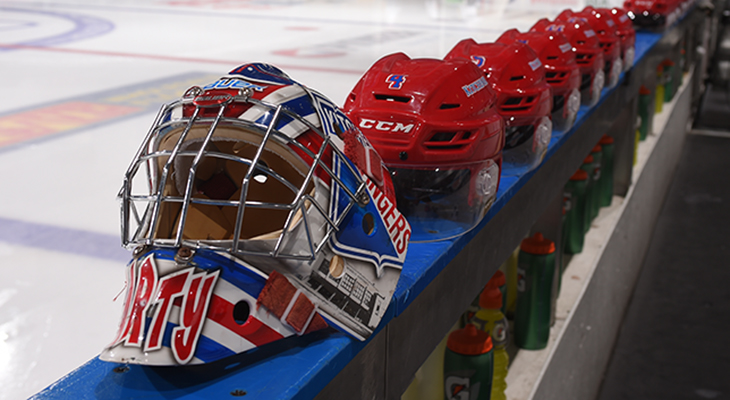 The sour taste in the mouths of Kitchener Rangers fans towards the London Knights did anything but disappear after Thursday night’s game at Budweiser Gardens.

Dawson Carty (6-1-0-1) dropped his first game in regulation this season, despite making 29 saves in goal for Kitchener. Tyler Johnson (3-1-0-0) started in goal for the Knights in place of an injured Tyler Parsons and collected the win, allowing four goals on 32 shots.

The game appeared to be all Rangers through the first 37 minutes of the contest maintaining a 3-0 lead, but the Knights would tally a pair of goals in 1:09, just as the second period was coming to a close, to cut the Kitchener lead to 3-2.

The Knights would tie the game, 3-3, just over six minutes into the third period, but the Rangers reclaimed the lead moments later. Taking advantage of an opportunistic 4-on-4 however, the Knights would again tie the game near the 13-minute mark before Mete’s last minute dagger sealed the win for the Rangers’ Midwest Division rivals.

Jeremy Bracco with a goal and Adam Mascherin with an assist was a positive for the Rangers, as they continued their seven and five game point streaks, respectively. Bracco, the current OHL and CHL Player of the Week, now has seven goals and 18 points in seven games played this season.

Riley Damiani chipped in with a pair of assists for the Rangers, while Dylan Seitz added two points of his own with a goal and an assist. Joseph Garreffa and Doug Blaisdell were the other Kitchener goal scorers on the night.

The Rangers opened the game’s scoring on Bracco’s seventh goal of the season, a one-timer from Mascherin, to give Kitchener a 1-0 lead at 11:30 of the first period. Mason Kohn picked up the second assist.

The Rangers would take the 1-0 lead into the first intermission while leading 10-6 on the shot clock.

Kitchener took a 2-0 lead just over six minutes into the second period when a deflection off a London stick in front of Johnson trickled into the Knights goal. Garreffa would get credit for the goal, his second of the season at 6:33, with the lone assist to Connor Hall.

Exactly one minute later Seitz tallied his third of the campaign, firing a shot from the left hash marks that beat Johnson to put the Rangers up 3-0, from Damiani.

With just 2:14 to play in the period the Knights got on the board as Cliff Pu registered his fifth of the season, from Max Jones and Brandon Crawley, at 17:46. Just 1:09 later London would cut the Kitchener lead to one as JJ Piccinich’s point shot found the back of the Rangers net to make it a 3-2 game. Mete and Liam Foudy picked up the assists on the goal at 18:55, which closed out second period scoring.

The Knights outshot the Rangers 14-13 in the middle frame for a two period total of 23-20 in favour of Kitchener.

With the Rangers on a 5-on-3 man disadvantage the Knights would capitalize, as Piccinich’s second of the night made it a 3-3 game at the 6:09 mark of the third period, from Jones and Robert Thomas.

Just over three and a half minutes later, Blaisdell registered his first goal of the season to restore a one goal lead for the Rangers, 4-3, from Seitz and Damiani at 9:44, but the Knights would again answer back.

With the teams playing 4-on-4 hockey after trading staggered minor penalties, Thomas made it a 4-4 game, from Crawley and Mete, at 12:59.

Mete gave the Knights their first lead of the night with just 39 seconds left in regulation getting the puck past a screened Carty, from Thomas and Jones. The Rangers then pulled Carty in favour of an extra attacker in an effort to tie the game, but Mete’s goal would hold up as the game winner.

Kitchener was 0-for-5 on the power play, while London was 1-for-3 with the man advantage.

Darby Llewellyn and Dylan Di Perna each wore “A’s” and skated as alternate captains for the Rangers.

The Rangers are back home tomorrow night, Friday, October 21, when they host the Hamilton Bulldogs for the lone time this season. Game time is 7:30pm. They close out the weekend by making their one and only visit to the Hershey Centre to face the Mississauga Steelheads on Sunday, October 23 at 2pm.