Lending a Hand in a Time of Need 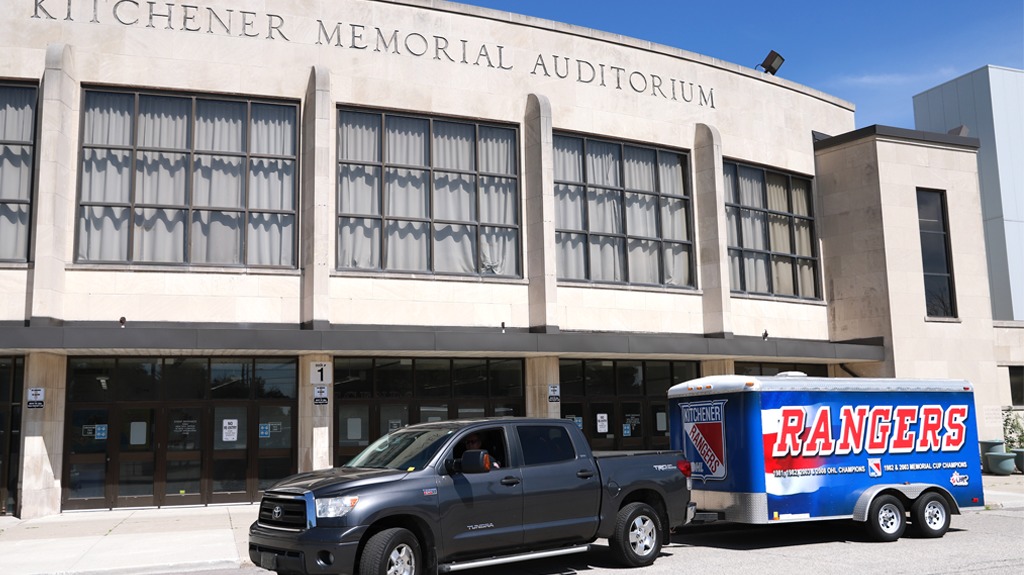 It’s Thursday morning, and not unlike most people, Dan Lebold grabs his coffee before leaving the house and jumps in his truck to head to work.

Instead of taking his usual route towards the Kitchener Memorial Auditorium (which he has taken thousands of times as he is entering his 26th season with the Rangers), Lebold’s destination is The Food Bank of Waterloo Region.

Since the COVID-19 pandemic began, the team’s long time Head Trainer and Equipment Manager has volunteered for up to five hours every week, making stops at grocery stores across Kitchener and Waterloo for pick-ups of non-perishable food items and other essentials.

Wendi Campbell, the Chief Executive Officer of The Food Bank of Waterloo Region, explained that they didn’t have the volunteers or transportation resources available to do regular pick-ups due to the pandemic. Their fleet of trucks also had to be diverted to deliver directly to partner agencies and programs.

“Not only did Dan have the time, but he also had a truck and the use of the Rangers trailer. For us, that was an awesome opportunity,” Campbell said.

“Having the support of Dan and the Rangers was one of the pieces during these unprecedented times that allow us to continue to serve the most vulnerable in our community. To have that enthusiasm during a complicated and stressful time, he was a really bright light that we are incredibly thankful for.”

With the remainder of the 2019/20 OHL regular season and playoffs cancelled, Lebold reflected how it didn’t take long for him to come up with the idea to ask the Food Bank if they needed an extra hand.

It was something he and his wife thought they could also end up doing as a couple for the foreseeable future. After the first week, though, she went back to work. He’s carried on.

“We all know that the pandemic can be a real drain, mentally. By doing this, I feel better knowing that I’m giving back,” Lebold explained. “You’re not going to get paid for everything you do, but there’s a certain sense of accomplishment of contributing to the community’s well-being.”

Initially, he was assigned a few grocery stores each week. He continued taking on more and more since learning about the Food Bank’s operations and how the system works.

In his accumulated 60 hours of service, the Food Bank estimated that Lebold has collected just under 18,000 pounds of goods and the equivalent of almost 14,000 meals.

“I’ve gained a new appreciation for what goes on behind the scenes. They’re a team too, and a pretty impressive one at that,” Lebold says. “I’m just a small cog in the Food Banks’ wheel, though. I enjoy working with all of the staff there; everyone from the top down.”

The feeling is mutual, according to Campbell, as she described how his warm personality has resonated with the staff and others he has interacted with on his route.

Lebold readily admitted that he was nervous the first time he went out, not knowing where he was going, where to park, or who he was interacting with. It helped that most people wanted to talk hockey, though.

“The Rangers fans are excited. They’re asking about the team and looking for any bit of news,” he said with a laugh.

Also, putting a smile on Lebold’s face is seeing how everyone has rallied around others’ needs.

“The response I get makes me feel good about our community. There’s a need for the Food Bank’s resources, so it’s nice to see how giving they are. People are just so supportive,” he said.

Currently, Lebold is averaging 12 to 14 grocery stops per week. The first eight weeks, he finished all the stores in one trip. He has recently had to drop off and pick up two more totes to complete his route.

“It’s something I look forward to every week now.”

For safety reasons, Campbell explained how the Food Bank wasn’t initially able to embrace all of the offered support. But the enthusiasm hasn’t diminished as restrictions have loosened.

“This entire community has really rallied around the needs of others. It’s that generosity that has allowed for those bins to be filled, giving Dan an important role in our organization right now.”