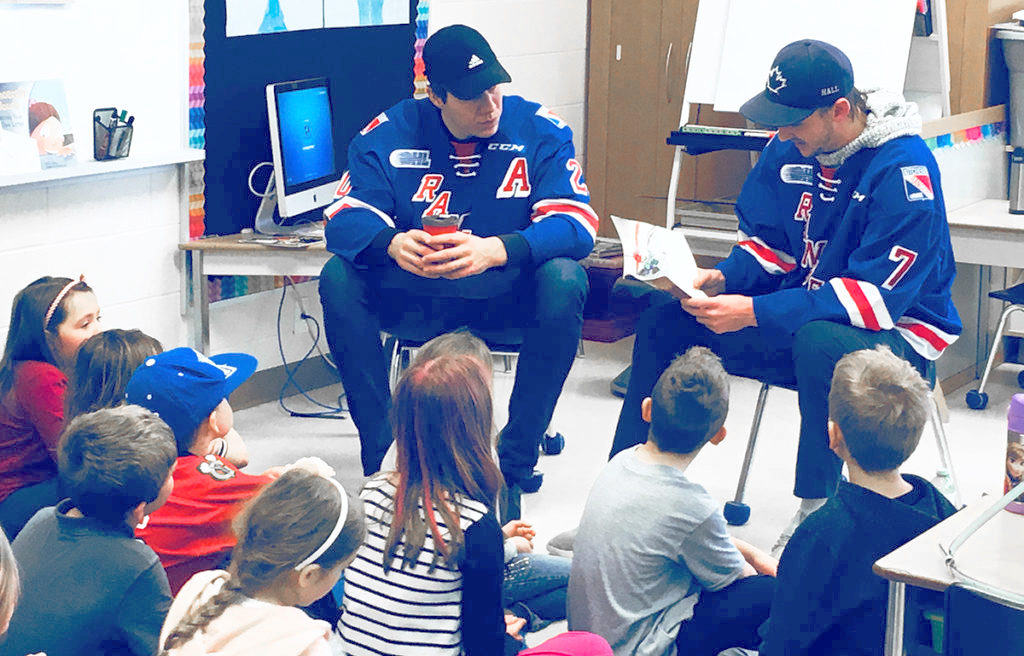 Kitchener Rangers players Logan Stanley and Connor Hall visited Grade 2 and 3 students at Bridgeport Public School in Kitchener on Wednesday, January 31 for a Read with the Rangers on the RBC School Tour.

Read with the Rangers is a program that focuses on the importance of literacy while having fun. Students have the opportunity to read with their favourite Rangers players, and learn a little more about the players’ experiences through reading and education.

The players discuss important lessons with the students like respect, goal-setting, sportsmanship and teamwork.

The concept of Brady Brady and the MVP especially resonated with the students because a number of them played for a team in Waterloo while others played for a team based in Kitchener. Logan and Connor explained that sometimes a necessary part of hockey is leaving one team and joining another if it means you get more playing time. Connor mentioned that this season he had friends on the Rangers who left to go play for other teams because of that very reason, but they are still friends.

Logan added that it’s important to have fun playing any sport, since it’s why you got started in it in the first place.

The students were under the impression that the players only played hockey, so Logan and Connor explained that they also pursue all different kinds of education at the same time, depending on the player. Some players are still in high school, others go to university, some take online courses and a group of over ten of them even took a cooking course together earlier in the season.

They explained to the students that even though their hockey schedule keeps them busy, it’s important for them to find the time to still pursue their education to keep their minds sharp off the ice.

The next visit on the RBC School Tour will be a Read with the Rangers on Monday, February 12 at St. Daniel Catholic Elementary School in Kitchener.