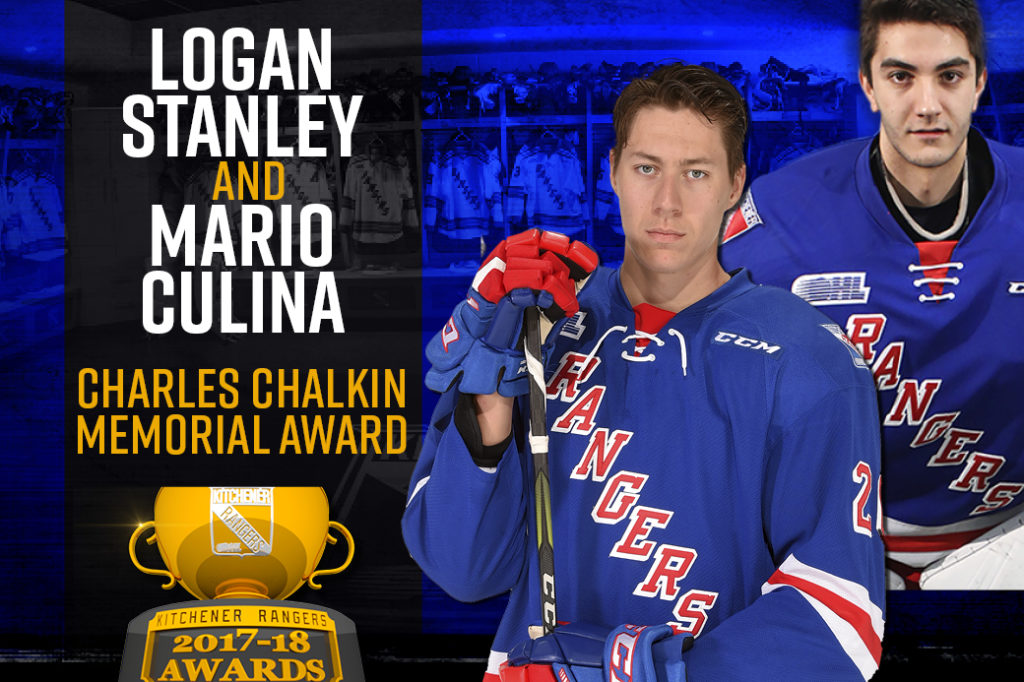 Kitchener Rangers head coach Jay McKee announced at the team’s end of season reception on Wednesday that Logan Stanley and Mario Culina were named the co-winners of the Charles Chalkin Memorial Award as Playoff MVP.

Logan was named co-MVP of the 2018 playoffs following an inspired post-season run. The Waterloo native put up an impressive 16 points (4G, 12A) in 19 playoff games, which included the game-winning goal in Game 1 of Round 2 vs. the Sarnia Sting. His ability to produce points was impressive, but so too was the ice time in which he logged throughout the Rangers’ post-season campaign. In Game 7 of the conference final vs. the Greyhounds, he registered an incredible 50+ minutes, while also sending the game to overtime with a goal with just 51.8 seconds remaining.

The addition of Mario Culina to this Kitchener Rangers team at the trade deadline was easily one of the biggest impacts on the team’s success. In 19 playoff games, Culina finished with a record of 11-5-2-0 after the Rangers disposed of the Guelph Storm in six games in Round 1, the Sarnia Sting in six games in Round 2 before taking the Soo Greyhounds to double OT in Game 7 of Round 3. He earned one playoff shutout and was among the league leaders in statistical categories such as goals against average (2.79) and save percentage (.917).