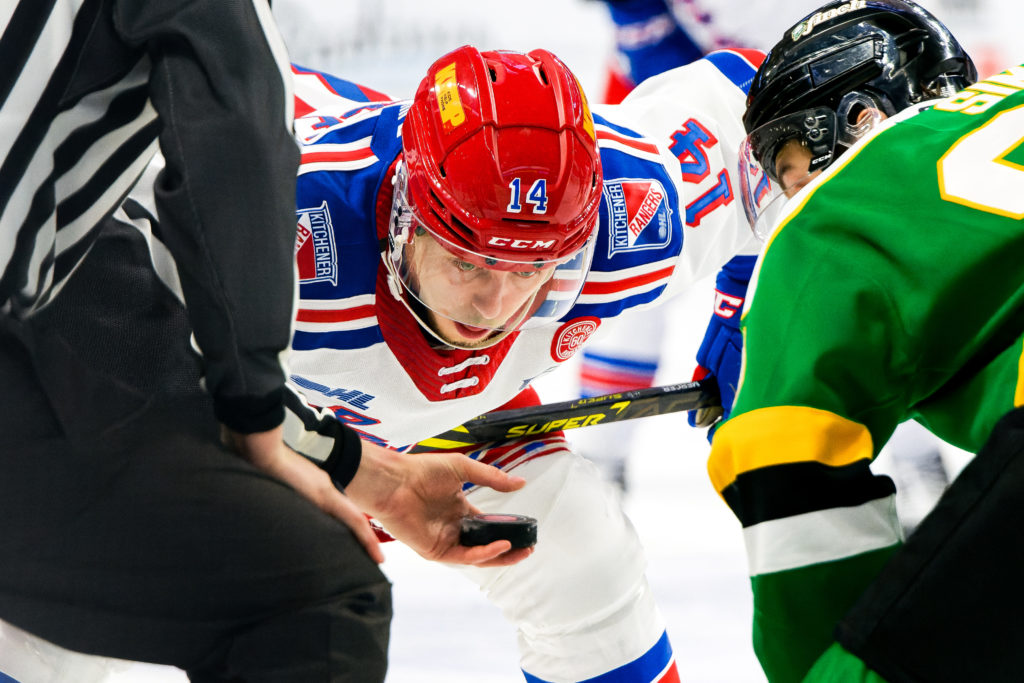 London, Ont. – The Rangers wrap-up a three-in-three weekend Sunday afternoon against the London Knights. Puck drop is set for 2 p.m. at the Budweiser Gardens for the third of six games between the two clubs this season.

Head-to-Head:
Kitchener and London have seen each other 30 times in the last 5 years. Kitchener holds a 9-21-0-0 record overall and a 5-9-0-0 record in London. This is the third of six matchups between these two bitter rivals this season. Kitchener lost the two meetings between these clubs so far, both on home ice. Last year was Kitchener’s best showing against London, going 4-6-0-0 overall and 2-3-0-0 at the Budweiser Gardens.

The last time Kitchener was in London, the Rangers earned a 4-3 overtime victory over the Knights in game seven to knock London out of the playoffs on May 4.

The Kitchener Rangers had a third period comeback against the Sarnia Sting fall short Saturday night and will look to bounce back in London on Sunday. Kitchener is now four points out of a playoff spot and have four games in hand on the eighth place Soo Greyhounds. The Rangers are 6-10-2-0 on the road this season and 2-7-1-0 over their last 10 games.

The London Knights are hot on the tail of the Windsor Spitfires as they enter play Sunday just three points behind the Western Conference leaders and will be looking to close that gap. London is currently on a two-game win streak which included their 7-3 win over the Rangers at The Aud Tuesday night. They are also 7-3-0-0 over their last 10 games. The Knights have a better record on the road this season but are still an impressive 14-8-1-0 on home ice.

Scouting the Rangers:
The Rangers continue to find new ways to create offence and on Saturday both of their goals came shorthanded. Reid Valade and Francesco Pinelli (Los Angeles Kings) each scoring a goal in the game raising their totals to two shorthanded goals apiece. That puts them in a tie for the second most shorthanded goals in the OHL this season.

Francesco Arcuri (Dallas Stars) continues to lead the Rangers in points this season with 48 points (28G 20A) in 42 games and has 14 points (5G 9A) in 13 games with the Rangers. Francesco with a goal on Friday night raised his total to 28 and now has the third highest goal total in the OHL and is tied for second most power-play goals with 13.

Marco returned to fine form Friday night against the 67’s earning his first win in six starts. With Marcus Vandenberg getting the start Saturday night, Marco figures to draw back in between the pipes. Marco stopped 32 of 34 shots for a 0.941 save percentage and 2.00 goals against average.

Scouting the Knights:
Ryan Winterton (Seattle Kraken) has played seven games for the Knights this season and also recorded three points against the Rangers. In just seven games with London, Winterton has nine points (4G 5A).

Captain George Diaco continues to lead the Knights in points this season with 52 points (20G 32A) in 39 games this season.

Broadcast Coverage:
Sunday afternoon’s contest will be televised live throughout Kitchener and the Waterloo Region on Rogers TV, cable channel 20. In addition, the contest can be watched across the province of Ontario on the Super Sports Pack on channel 467 for cable subscribers. The game will be streamed live online in a web browser at OHLLive.com, and on the CHL App  for mobile devices including smart TV’s such as including Apple TV, Roku and Amazon Fire.

Additionally, fans can listen to the game on the radio on CityNews 570 AM CKGL. Mike Farwell (play-by-play) and Chris Pope (colour commentary) will call the game on the radio. Fans can tune in to the radio pregame show 30 minutes prior to puck drop. For more information on Kitchener Rangers broadcast coverage, click here.