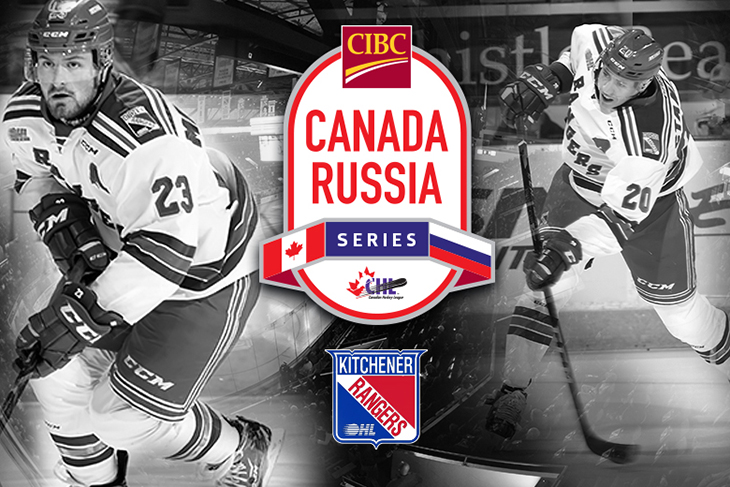 Toronto, ON – The Ontario Hockey League, in collaboration with the Canadian Hockey League, Owen Sound Attack and Sudbury Wolves Hockey Clubs, and Hockey Canada, announced today the rosters for Team OHL, which will compete against Team Russia in the 2017 CIBC Canada Russia Series.

Kitchener Rangers forward Adam Mascherin and defenceman Logan Stanley have been selected to represent Team OHL in Game 3 of the tournament being held on Thursday, November 9 in Owen Sound.

28 players will represent the OHL in the 2017 CIBC Canada Russia Series including 11 players who will compete in both games.  A total of 16 players are listed on Team OHL rosters that received invites to Canada’s National Junior Team Summer Showcase led by returning World Junior silver medalist Taylor Raddysh of the Erie Otters.  The rosters feature 24 players who have been selected in the NHL Draft including first round picks Nick Suzuki of the Owen Sound Attack (Vegas Golden Knights, 13th in 2017), Logan Stanley of the Kitchener Rangers (Winnipeg Jets, 18th in 2016), Robert Thomas of the London Knights (St. Louis Blues, 20th in 2017), and Morgan Frost of the Sault Ste. Marie Greyhounds (Philadelphia Flyers, 27th in 2017).

Suzuki will be one of three Attack players to compete before the hometown crowd on November 9 alongside Vancouver Canucks prospect Jonah Gadjovich and Los Angeles Kings prospect Markus Phillips.  In Sudbury on November 13, the host Wolves will be represented by forward Macauley Carson.

In 14 years of competition against the Russian National Junior Team, the OHL has a record of 23-4-1 in this series following a 4-3 loss in North Bay and 5-2 victory in Hamilton last season.

The CIBC Canada Russia Series has been an integral part of the identification process for Team Canada for the past 14 years prior to the IIHF World Junior Hockey Championship.  Since the event first began in 2003, CHL teams have played to an overall record of 58-19-1-6.  The competitiveness of the rivalry has grown in recent years with four of the last seven series decided in the final game, and with Russia earning three series wins since 2010 compared to the CHL’s four series triumphs over the same period including last season by a 13-5 margin in points

The 2017 CIBC Canada Russia Series is supported by title sponsor CIBC, the Official Bank of the CHL, along with associate sponsors Cooper Tires and Sherwin-Williams.  All games will be broadcast nationally on Sportsnet and TVA Sports.

For event information including how to purchase tickets please visit http://chlcanadarussia.ca.