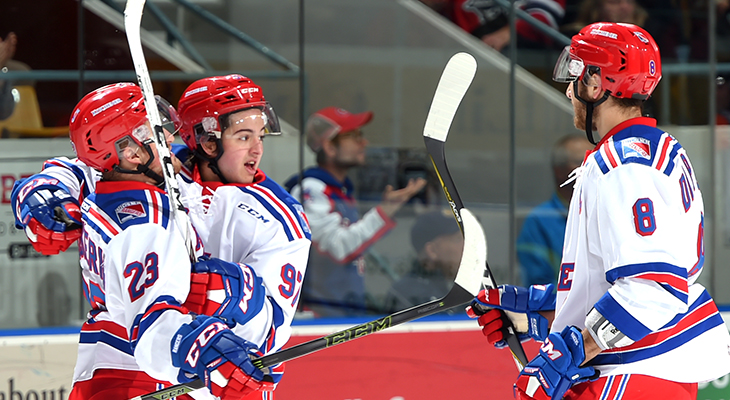 It was a Halloween game at the Aud this afternoon when 6,830 fans witnessed disappearing defensive zone coverages, phantom penalties and screaming fans when Adam Mascherin acted like Houdini and scored the overtime winner to give the Rangers a Halloween treat with a 6-5 win over the Saginaw Spirit.

Joesph Garreffa opened the scoring with his 3rd of the season when he took a Dylan Seitz centering pass from behind the net, stepped around a sprawling Saginaw defender and snapped a low shot past Brendan Bonello.

Seitz then picked off a Spirit clearing attempt and beat Bonello with a high wrist shot to give the Rangers a 2-0 lead. 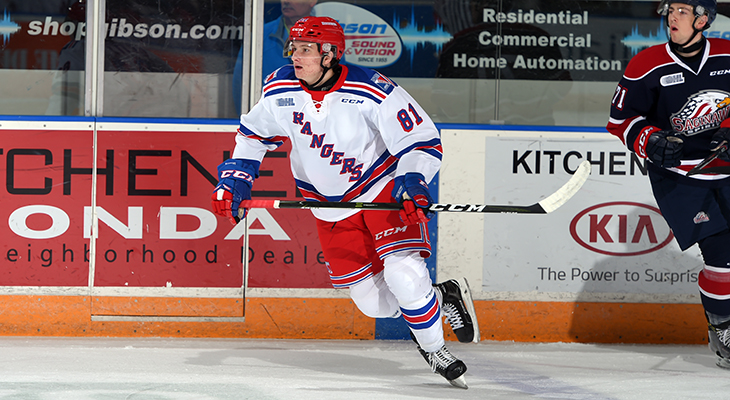 Saginaw’s Kris Bennett had an opportunity to close the gap only to be stopped by Dawson Carty on a penalty shot. Former Ranger, Mike Davies scored his 2nd of the season for the Spirit at 17:12 to close out the scoring in the 1st period. The Spirit out-shot the Rangers 12-10.

Saginaw started out quickly in the 2nd period with goals by Bennett and Cole Coskey to give the Spirit a 3-2 lead before the period was three minutes old.

Cedric Schiemenz with his 1st OHL goal and Jeremy Bracco answered back for the Rangers to take back a 4-3 lead. Hayden Hogson tied the game at 4-4 before the end of the period. The Spirit continued to lead the shot parade with a 26-21 margin.

Dylan Di Perna scored a power play marker to give the Rangers their 3rd lead of the game with helpers going to Bracco and Mascherin. Mitchell Stephens answered back with a shorthanded goal a 1:04 later to tie the game at 5-5.

At 2:15 of overtime, Mascherin completed his Houdini act when he broke through the neutral zone, undressed the Saginaw defender and went to his backhand before depositing the puck behind Bonello and into the empty net.

Seitz finished the game with his first three point game of the season.

The victory was the Rangers fourth in a row and improved their record to 10-3-0-1 on the season.

Shots on goal in the game were 40-30 in favour of the Spirit.

Kitchener was 1-for-6 on the power play, while Saginaw was 0-for-5 with the man advantage.

The Rangers are back in action on Wednesday, November 2, when they travel Sarnia before returning to the Aud on November 4 to face the Flint Firebirds at 7:30 pm.