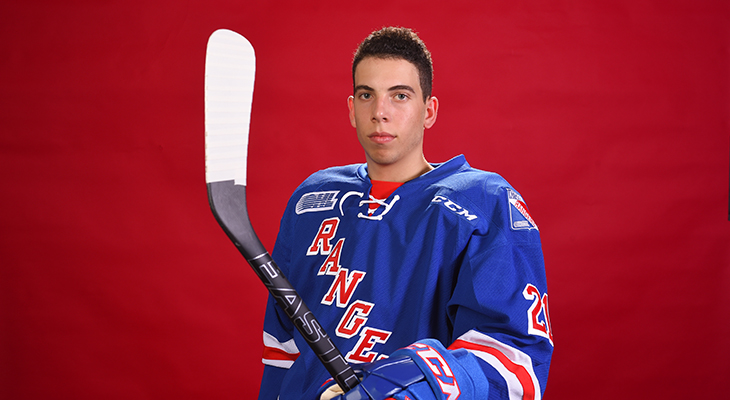 The Kitchener Rangers (36-26-2-2) completed the season series with their Highway 7 counterparts, defeating the Guelph Storm (20-38-5-2) with a 6-5 overtime decision in front of 4,021 fans at the Sleeman Centre on Tuesday night.

The win now cements the Rangers will finish in sixth place in the Western Conference standings, and await their (third seeded) opponent for Round One of the OHL playoffs.

Currently the Owen Sound Attack maintain third in the conference standings with 96 points after a 6-4 win over the Flint Firebirds tonight. The Attack now trail the first-place Erie Otters (99) by just three points after Erie fell to the fourth-place London Knights (95) tonight, 3-2. Fifth-place London trails Owen Sound by just one point, as both teams have a game in hand (65 games played) over the Otters (66).

For more playoff information, or to purchase tickets, click here.

At the onset of the night in Guelph, it would have seemed ludicrous to imagine McHugh would even be presented the opportunity to repeat his overtime heroics, as Kitchener jumped out to a convincing 4-0 lead in the first period.

Not only did that lead evaporate, but the Rangers found themselves in a 5-4 hole with only 2:38 left to play in regulation after surrendering five straight goals to their Royal City rivals.

However, Guelph native Connor Bunnaman came through for the Blueshirts in timely fashion, tying the game, 5-5, with just over a minute to play to send the game to extra time.

Anthony Popovich (7-16-1-1) took the loss in goal for the Storm, allowing six goals while making 22 saves.

Llewellyn’s goal was a brilliant move on a penalty shot, and came in the veteran’s 300th career regular season OHL game.

The Rangers wasted little time getting on the scoresheet to start the night, as Mascherin tallied his 35th goal of the season – and 99th point – to give the Rangers a 1-0 lead at the 1:06 mark of the first period, assisted by Kyle Gentles and Greg Meireles.

With the Rangers on their first power play of the night, Llewellyn broke into the offensive zone but was hauled down in front of Popovich and was awarded a penalty shot. He would score his 23rd of the season after outlasting the Storm netminder with some nifty stickhandling to give the Rangers a 2-0 lead at 8:27.

Just over two minutes later Kitchener extended its lead to 3-0 as Jonathan Yantsis scored his third goal of the season, from Elijah Roberts and Carter, at 10:32.

Carter continued to add to the early Guelph misery, registering his 14th of the campaign, assisted by Riley Damiani and Joseph Garreffa, to make it a 4-0 game at 14:02.

But after a number of Storm power play opportunities Guelph would finally capitalize with the man advantage, as Isaac Ratcliffe made it 4-1, from Dmitri Samorukov and Nate Schnarr with just 1:11 to play in the high scoring, opening frame.

Shots on goal in the first period of play were 15-11, Kitchener.

Matt Hotchkiss’ 13th of the season closed the gap to 4-2 at 8:44 with the lone assist to Nic Sicoly.

In the final minute of play in the middle frame, a broken play in the neutral zone proved costly for the Rangers. The Storm regained possession and made it a 4-3 game on the stick of Cedric Ralph, his eighth of the season, from Samorukov and Hotchkiss.

With just over five minutes to play in the third period the Storm completed the comeback, as Ryan Merkley’s 11th of the season came by way of the power play to make it a 4-4 game, assisted by Garrett McFadden and Ratcliffe at 14:26.

With only 2:38 to play the Storm took their first lead of the night. Ratcliffe’s 26th of the season made it 5-4 in favour of the hosts from McFadden and Merkley at 17:22.

But the game wasn’t over yet, as Bunnaman responded for the Blueshirts. His 35th of the season once again tied him with Mascherin for the team lead in goals which tied the game, 5-5, with just 1:34 to play from Dylan Di Perna and Roberts.

The game headed to overtime and it was once again McHugh who buried the winner for the Rangers, skating through the neutral zone with a burst of speed to escape a Guelph defender and pot his 13th of the season, unassisted, at 1:39.

Shots on goal in the third period of play were 9-8 Kitchener and a shot apiece in overtime for a game total of 37-28, Guelph.

Kitchener was 1-for-3 on the power play, while Guelph was 2-for-5 with the man advantage.

The Rangers host their final home game of the regular season – ‘Fan Appreciation Night’ – on Friday, March 17th at 7:30pm vs. the Erie Otters.

Tickets to the first two Kitchener Rangers’ home playoff games (Games ‘A’ & ‘B’) of Round One will go on sale Friday, March 17th at 10am. Click here for more information.