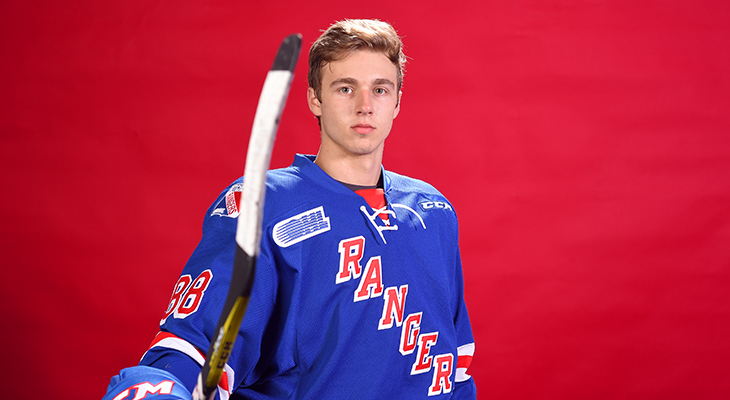 After a less than inspiring effort fewer than 24-hours prior, the Kitchener Rangers rebounded with a 4-1 win over the Saginaw Spirit in front of 2,812 fans at the Dow Event Center on Saturday night.

Joseph Garreffa and Greg Meireles each registered a goal and an assist to help guide the Rangers (16-8-0-1) back into the win column, while the Spirit (7-13-2-1) dropped their second in a row.

Mason Kohn, Garreffa, Meireles and Adam Mascherin were the goal scorers for Kitchener, who made the most of their one power play opportunity of the night with Meireles’ marker.

Jeremy Bracco, who picked up the second assist on the power play goal by Meireles, extended his season long point streak to 22 games and 45 points (16G, 29A).

Kohn opened the game’s scoring with his fifth of the season, from Nick McHugh and Eric Guest, to give the Rangers a 1-0 lead at 15:57 of the opening period.

It was the lone marker of the first, which saw the Spirit outshoot the Rangers 11-8.

After a scoreless second, Garreffa got on the board early in the third period to add to the Rangers lead, making it 2-0 – unassisted – at 1:26.

The Rangers took a 3-0 lead on the stick of Meireles, another power play goal, from Connor Bunnaman and Bracco at 6:37.

Saginaw got themselves on the board as Max Grondin scored his second of the season, from Marcus Crawford and Damien Giroux, to make it 3-1 at 9:55.

Mascherin capped off the scoring for the Rangers, making it 4-1 at 13:49 from Garreffa and Meireles.

Kitchener was 1-for-1 on the power play, while Saginaw was 0-for-2 with the man advantage.

Dylan Di Perna wore an “A” and skated as an alternate to Rangers captain Frank Hora.

The Rangers take to the road for the next two games, spending the duration of next weekend on an eastern swing as they face the Kingston Frontenacs on Friday, December 2 at 7pm, then face the Ottawa 67’s the following afternoon, Saturday, December 3 for a 2pm start.

They return home to the Aud on Wednesday, December 7 when they host the Mississauga Steelheads for the 22nd annual Teddy Bear Toss game at 7pm.