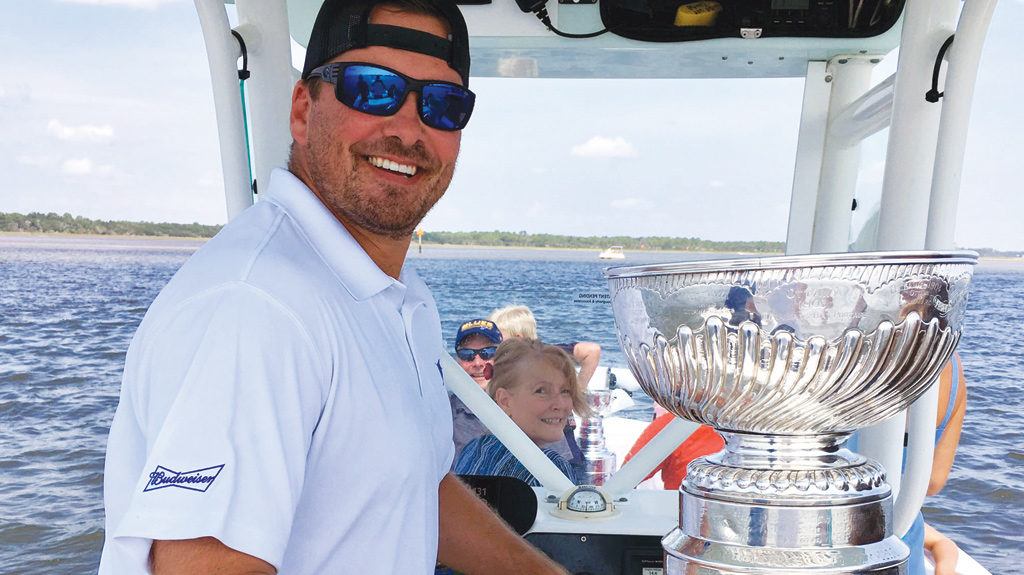 How’s it gonna go down?

Not only was the question posed in Laura Branigan’s 1982 hit “Gloria”, but it was also being asked by every St. Louis Blues fan as the team became NHL “cellar dwellers” on January 1st, 2019.

By June 12th, they were more than happy to provide their own jubilant answer as the resurgent Blues became Stanley Cup champions for the first time in franchise history – while adopting the catchy 80’s tune as the team’s victory song along the way.

Right in the thick of St. Louis’ historic season was former Rangers Head Coach Mike Van Ryn. Hired as an assistant coach in May 2018, Van Ryn had spent three formative years coaching the Blueshirts between 2013 and 2016; the first two as an assistant and the third as the team’s head coach.

Finding his way back to St. Louis after stops in Scottsdale and Tuscon, Arizona (as a Player Development Coach and the AHL Roadrunners Head Coach, respectively), Van Ryn was still trying to recover from what he admitted “was a bit of a draining year, with how we started and having to get it going.”

It started with the Blues firing then-Head Coach Mike Yeo after starting the season with a 7–9–3 record and replacing him with interim Craig Berube.

Things were back on an upswing on March 29th when the Blues became just the seventh team since the 1967–68 season to qualify for the playoffs after being placed last after January 1st.

Showing a level of perseverance rarely seen, the team would go on to defeat the Boston Bruins in the seventh game of the Stanley Cup Final.

Speaking of those final games from his home in St. Augustine, Florida, Van Ryn recalled their first chance to win the Cup – on home ice no less.

“It was deflating. There was so much pressure on our guys. They wanted to win it for the fans, they all had family members in town … and we didn’t play well,” recalled Van Ryn of the eventual loss.

When the team got on the plane headed back to Boston for game 7, “it was almost like we were relieved”.

“To go in and bounce-back from game 6 – and that feeling of letting people down – was huge,” he said.

From “never having been close to winning in the NHL – ever” to raising the Stanley Cup, Van Ryn saw similarities between the Blues’ run and his time with the Rangers.

“Going through that first year I had in Kitchener, when we knew we were going to have a tough year … I think it helped me prepare for this year; getting through the awful start and just sticking with it,” said Van Ryn.

“Like we did in Kitchener, we just kept grinding.”

While he admitted that it’s almost impossible to thank every person who has helped in his coaching development, Rangers COO & Governor Steve Bienkowski remains at the top of his mind to this day.

“He always talked about how we’re there to help mould our young players into men and prepare them to make that jump to the next level.

“But one thing he always said was he’s also there to help develop coaches, and they definitely did that for me … and I’ll be forever thankful to the Rangers for giving me that opportunity and furthering my career,” he said.

Getting his day with the cup on August 9th, plans were already in place to hold celebrations in the oldest hotel of the oldest American city (St. Augustine) with the oldest professional sports trophy (the Stanley Cup).

“It’s a small town, but people got behind us pretty well – and it was an easy team to support,” said Van Ryn.

Speaking of the fan support, he can’t help but draw another similarity between Kitchener and Missouri’s hockey town.

“I tell people all the time that Kitchener and its fan base will rival any team in any sport at any level.”

“Both fan bases never waver, they always love the team, and they have always supported the team. It was amazing to see St. Louis rewarded with a Cup.”