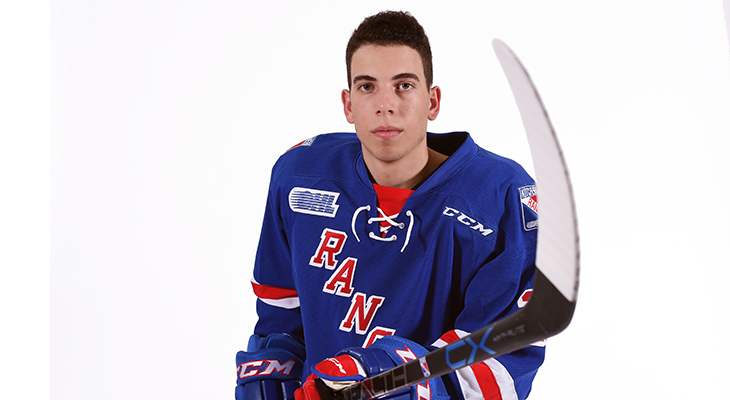 The London Knights scored twice on the power play en route to a 4-3 win over the Kitchener Rangers in front of 6,784 fans at the Kitchener Memorial Auditorium Complex on Tuesday night.

Sam Miletic and JJ Piccinich each scored and added a pair of assists for the Knights (13-3-2-1), who picked up their fifth road win of the season.

Adam Mascherin on the power play, Nick McHugh and Dylan Seitz were the goal scorers for the Rangers (11-7-0-1), who dropped just their second game in regulation on home ice this season.

Tyler Parsons (4-1-1-0) earned the win in goal for London, making 24 saves on 27 shots. Dawson Carty got the nod in goal for the Rangers but was dealt the loss despite making 28 saves.

Jeremy Bracco picked up an assist on the game’s opening goal to extend his season-long point streak to 16 games, registering 11 goals and 20 assists for 31 points during that span.

The game was scoreless for the majority of the opening frame, until Janne Kuokkanen capitalized on a Knights power play to make it 1-0. Piccinich and Cliff Pu picked up the assists on the goal, which came at 15:27.

It was the lone goal of the period for either side, as the first period came to a close with the Knights outshooting the Rangers 12-4.

London wasted little time widening their lead, as they made it 2-0 just 26 seconds into the second period on Piccinich’s ninth goal of the season, from Miletic and Robert Thomas.

The third man advantage awarded to the Knights would produce their second power play goal, as Pu made it 3-0 from Owen MacDonald and Miletic at 7:38.

The Rangers finally etched the scoresheet with a power play marker of their own, Mascherin’s 11th goal of the season at 8:28 to make it 3-1, with Joseph Garreffa and Bracco picking up the assists.

After two periods in the books, the Knights led the Rangers in shots by a 21-15 margin, which included 11-9 Kitchener in the middle frame.

McHugh pulled the Rangers to within one, cutting the London lead to 3-2 just 2:39 into the third period, with Jacob Cascagnette picking up the lone assist.

The Rangers pressed, but it was the Knights who would tally the next goal, restoring a two-goal lead, 4-2, from the stick of Miletic, assisted by Piccinich.

Just under two minutes later Seitz responded for the home side with his fifth goal of the season, making it 4-3 at 15:26 from Frank Hora and Riley Damiani, but it was as close as they’d come to finding the equalizer.

Final shots on goal were 32-27 London, including 12-10 Kitchener in the third period.

Kitchener was 1-for-4 on the power play, while London was 2-for-4 with the man advantage.

The Rangers travel to Peterborough to take on the Petes on Thursday, November 17 for a 7:05pm start before they return home to host the Oshawa Generals next Friday, November 18 at 7:30pm.