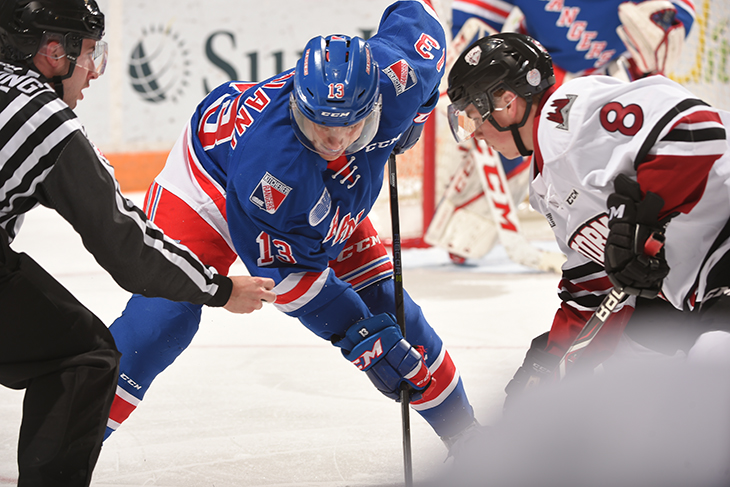 Cole Carter scored his first career Ontario Hockey League hat trick to help lead the Kitchener Rangers (20-10-2-0) to a convincing 10-3 win over the Guelph Storm (16-11-1-2) in front of 4,536 fans at the Sleeman Centre on Sunday afternoon.

It was Sunday Funday for the Rangers who saw eight different goal scorers on the afternoon, and a total of eight players register multi-point games in the win.

Adam Liška tallied a goal and three helpers for a four-point afternoon, while Jake Henderson, Greg Meireles and Adam Mascherin each registered a goal and a pair of assists.

The goal for Mascherin extends his goal scoring streak to seven straight games, tallying ten goals and 14 total points in that span.

Giovanni Vallati (1A), Riley Damiani and Jonathan Yantsis were the other goal scorers for the Rangers, as 14 Kitchener players came away with a point on the afternoon.

Despite Mason Primeau’s Teddy Bear goal at 2:40 of the second period, there wasn’t much for Storm fans to cheer about, as they saw a four-game win streak by the club snapped.

Anthony Popovich (15-9-1-1) took the loss in goal, surrendering six Rangers goals on 25 shots through 31:35 of ice time. Nico Daws came in to replace Popovich and allowed four goals on 15 shots.

Luke Richardson (13-7-1-0) did well to remain focused in the Kitchener crease during times where he didn’t see a lot of action, as the Rangers outshot the Storm in each of the game’s three periods of play. He turned aside 25 of 28 shots to earn the win.

Vallati got the scoring started in the first period, giving the Rangers a 1-0 lead from Eric Guest and Grayson Ladd at 7:33. The assist for Ladd was his first career OHL point.

Kitchener would go up 2-0 as Carter notched his first of the game, from Liška and Rickard Hugg at 12:39.

Mascherin’s 21st of the season rounded out first period scoring and sent the Rangers into the first intermission with a 3-0 lead, from Kole Sherwood and Joseph Garreffa, at 14:33.

The Rangers commanded the shot clock during that opening frame, as large a span of 14-4 with less than five minutes to play. Kitchener outshot Guelph 16-7 after 20 minutes.

Just 2:40 into the second period Primeau scored the coveted Teddy Bear goal sending the fur flying at the Sleeman Centre. Primeau’s third of the season cut the Rangers lead to 3-1, assisted by Ryan Merkley and Owen Lalonde.

That was about the only positive the Storm could draw from that second period, as the Rangers would add four more goals to widen their lead.

Just over a minute after Primeau’s goal and the Teddy Bears were cleared from the ice, Liška regained the three-goal lead for the Rangers, making it a 4-1 game from Henderson at 3:46.

Damiani pounced on a rebound after a give-and-go passing play with Henderson to bury his 11th of the season, from Bunnaman and Henderson, at 11:09 to put the visitors up 5-1.

Carter’s second goal of the game made it 6-1 from Liška and Meireles at 11:35, which signalled the end of the afternoon for Storm starter Popovich in favour of Daws.

Carter’s hat trick goal came at 17:52, also from Liška and Meireles, at 17:52 to send the Rangers to the second intermission with a 7-1 lead.

Shots on goal through 40 minutes of play favoured the Rangers, 29-19.

The teams exchanged goals in the third period, Guelph getting on the board first in the final frame as Givani Smith scored, unassisted, at 1:13 to cut the Kitchener lead to 7-2.

The Blueshirts would answer right back, as Meireles made it 8-2 just 45 seconds later, from Mascherin and Sherwood.

Merkley’s ninth of the year gave the Storm their third goal of the afternoon, 8-3, from Mark Woolley and Smith, at 6:41, before Henderson answered back 31 seconds later with his sixth of the season, from Bunnaman and Vallati, at 7:12.

Jonathan Yantsis chipped in offensively giving the Rangers their 10th goal of the afternoon, burying a nice backhand after a pretty feed from Mascherin at 14:21 to finally round out the game’s scoring.

The Rangers were 0-for-4 on the power play, while the Storm were 0-for-1 with the man advantage.

The Rangers are back in action on Friday, December 15 when they host the Sault Ste. Marie Greyhounds at 7:30pm. Their final game before the Christmas break happens Sunday, December 17 at The Aud when they take on the Kingston Frontenacs at 2pm.