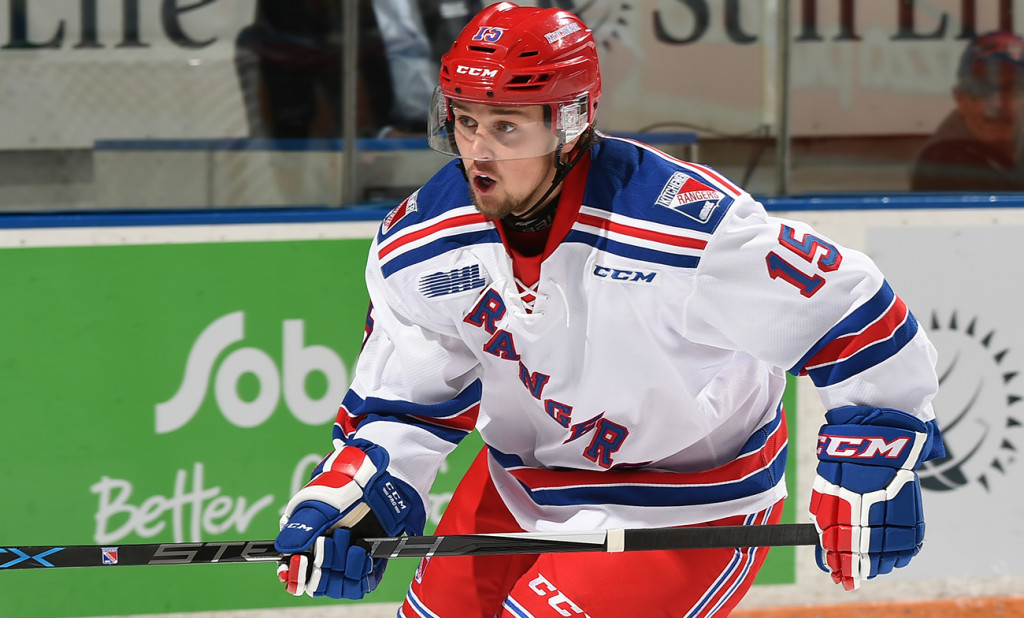 The Kitchener Rangers will look to begin the 2016 OHL Playoffs with the same ferocity in which they ended the regular season on Saturday night.

The Rangers took a 4-0 lead into the first intermission and controlled the pace of the game throughout the night as they skated away with a convincing 7-3 win over the Owen Sound Attack to round out their 68-game regular season campaign in front of 3,265 fans at the Harry Lumley Bayshore Community Centre.

Kitchener finishes the regular season with 20 road wins, the first time they’ve done so since the 2007-08 season when they finished 25-7-0-2 away from the Aud. Their 44 combined wins was also the most since 07-08, when they finished with 53 en route to celebrating an OHL championship.

The Owen Sound Attack finish their season with a record of 32-25-8-3, resting in sixth place in the west. As a result of a 4-2 Erie Otters win Saturday night over the London Knights, the Attack will now face the Knights in their Western Conference opening round series.

The Rangers opened the scoring in the first period after Adam Mascherin drove to the net and fed Gustaf Franzen with a pretty pass in the slot who capitalized with his 16th goal of the season at 7:50.

Mason Kohn followed that up with a spirited push through the offensive zone of his own, deking an Attack defender but was stopped by the pad of McNiven. Kohn would gobble up the loose puck, however, and find Jeremy Bracco out in front who made no mistake, giving the Rangers a 2-0 lead at 10:31. Connor Hall would pick up the lone assist on Bracco’s 21st of the season.

With close to five minutes left to play in the period McNiven tried to clear the zone from his crease, but inadvertently hit Connor Bunnaman with the puck. Bunnaman threw the puck towards the goal and missed just wide, but collected the loose puck to the side of the net and fed Franzen for his second of the period at 14:53 to give the Blueshirts a 3-0 lead.

With the Rangers on the man advantage, Dylan Di Perna fired a blast from the right point and made it 4-0, from Joseph Garreffa and David Miller, at 18:41 to round out the scoring in the first period.

Shots were 15-7 in favour of Kitchener through the opening 20 minutes.

Kohn would finally be rewarded for his solid efforts, finishing off a beautiful tic-tac-toe passing play from Garreffa and Brandon Robinson to make it 5-0 Kitchener just 1:16 into the second period.

With an Attack defender focused more on doling out some physicality in the direction of Mascherin in the neutral zone, Connor Hall took advantage. The blueliner sailed into the Owen Sound zone on a breakaway and outwaited McNiven to pot his second goal of the season at 10:04 to give the Rangers a 6-1 lead.

Just 1:24 later the Attack would respond, as Zach Roberts tallied his first OHL goal, from Matthew Struthers, at 11:28 to make it 6-2.

In the third period, Garreffa would respond with his third point of the night and third goal of the season, breaking deep into the offensive zone and tapping the puck home behind the Owen Sound netminder at 11:31, from Bunnaman and Jake Henderson, to make it 7-2.

The final goal of the game would come on the stick of Attack rookie Nick Suzuki, his 20th goal of the season from Jonah Gadjovich and Jacob Friend at 16:43, sealing the 7-3 final.

The Rangers finished the night 1-for-2 on the power play, while the Attack were 0-for-1 with the man advantage.

Zach Roberts (3), Joseph Garreffa (2) and Gustaf Franzen (1) were chosen as the Three Stars of the Game.

The Rangers open the 2016 OHL Playoffs on Thursday, March 24th when they host the Windsor Spitfires for Game 1 at the Aud at 7pm. Game 2 goes Saturday night at the Aud, also a 7pm start. For a full series schedule, visit kitchenerrangers.com.