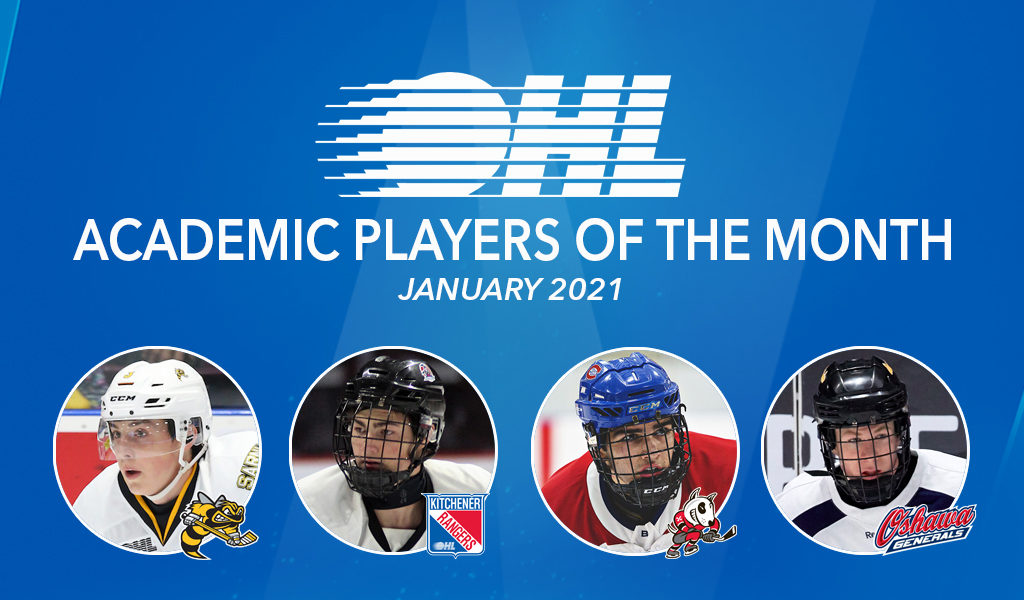 Toronto, Ont. – The Ontario Hockey League today announced that Cooper Way of the Oshawa Generals, Pano Fimis of the Niagara IceDogs, Trent Swick of the Kitchener Rangers and Ryan Mast of the Sarnia Sting have been named Academic Players of the Month for January.

Though the puck has yet to drop on the 2020-21 OHL Regular Season, players are striving for excellence in the classroom through their studies. The League continues to work with government and public health agencies to prepare a safe return to play. Academic players of the month are listed in correspondence with their 2019-20 divisions. Details concerning the structure of 2020-21 team alignment will be made available upon release of the OHL Regular Season schedule.

Here’s a look at the OHL’s Academic Players of the Month for January:

Midwest Division: Trent Swick of the Kitchener Rangers has been named Midwest Division Academic Player of the Month for January. At St. Francis Catholic Secondary School, he achieved an 87% grade in English, an 87% in Introduction to Anthropology, Psychology and Sociology, and a 94% in Chemistry. He currently holds a 90% mark in Religion as well.

“Trent is to be commended for his consistent academic focus and attention to detail during this very unusual and challenging school year,” wrote academic advisor Dave Tennant. “It takes a great deal of dedication and perseverance to achieve the success he has, and I wish him all the best in continuing his studies.”

Rangers head coach and general manager Mike McKenzie added: “It is great to see Trent has used his time wisely and kept up with his studies over the course of the year. One of the reasons we were excited to draft Trent last year was his work ethic on and off the ice and this award recognizes that off-ice work ethic.”

The 16-year-old Thorold, Ont. native was drafted in the third round of the 2020 OHL Priority Selection after a 55-point season with the Southern Tier Admirals.

A total of 334 graduates utilized their OHL Scholarship at post-secondary institutions across North America during the 2019-20 academic year, with a total contribution by teams of over $3 million.  Over the past 10 seasons, OHL Scholarship payments have totalled more than $25 million.