Opilka once again sturdy in goal, but Attack blank Rangers in Game 3 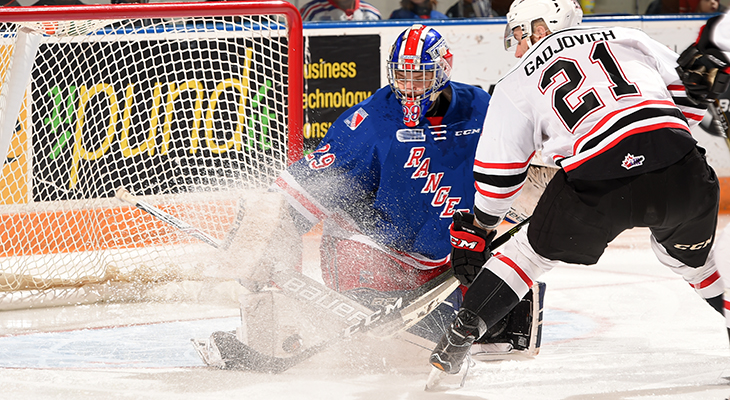 Luke Opilka continued to be extraordinary in goal for the Kitchener Rangers on Monday night at the Aud. Unfortunately, the offence just couldn’t muster the goal support needed against one of the league’s other great goaltenders, Michael McNiven.

The Owen Sound Attack (2-1) scored three times in the final period of play – including once into an empty net – to skate to a 4-0 victory over the Rangers (1-2) in front of 4,771 fans at the Kitchener Memorial Auditorium in Game 3.

The Attack now lead the best-of-seven series 2-1, with Game 4 set for Wednesday night, March 29th, back at the Aud at 7pm.

For more info or to purchase tickets to Games 3 and 4, click here.

Opilka (1-2) was named the game’s Second Star despite the loss, and with good reason. For the second game the St. Louis native faced more than 40 shots; tonight, seeing 45 and turning aside 42. His save percentage in the last two games is an impressive 0.953 after making 82 of 86 saves.

McNiven (2-1) picked up the shutout but wasn’t tested nearly as much as Opilka, as the Attack netminder faced a total of 21 shots; six in the first period, six in the second, and nine in the third.

The Attack opened the scoring on a delayed Rangers’ penalty, as Santino Centorame broke in near the bottom of the circle to the right of Opilka and gave the visitors a 1-0 lead. Kevin Hancock and Jacob Friend picked up the assists on the goal, which came at 17:45 of the opening period.

It was the lone goal of the first 20 minutes of play, which saw the Attack outshoot the Rangers 17-6.

After a scoreless second period, Nick Suzuki gave the Attack a 2-0 lead just over three minutes into the final frame, unassisted, for his second of the postseason at 3:26.

Under three minutes later with Owen Sound on a man advantage they extended the lead to 3-0, as Hancock tallied his second of the playoffs, from Petrus Palmu and Centorame, at 6:08.

Suzuki’s second of the game solidified the victory for the Attack, scoring into an empty net with 1:25 to play in regulation to round out the game’s scoring at 4-0, from Cordell James.

Kitchener was 0-for-3 on the power play, while Owen Sound was 1-for-4 with the man advantage.

The Rangers were again without forward Connor Bunnaman, who served the second of an automatic two-game suspension for a slew-foot during Game 1.

Tickets to the next Kitchener Rangers’ home playoff game (Game ‘B’/Game 4 of the series) of Round One are on sale now and are available in person, or by calling the Kitchener Memorial Auditorium Box Office or Centre in the Square (519) 578-1570 -or- 1-800-265-8977, or by purchasing online.