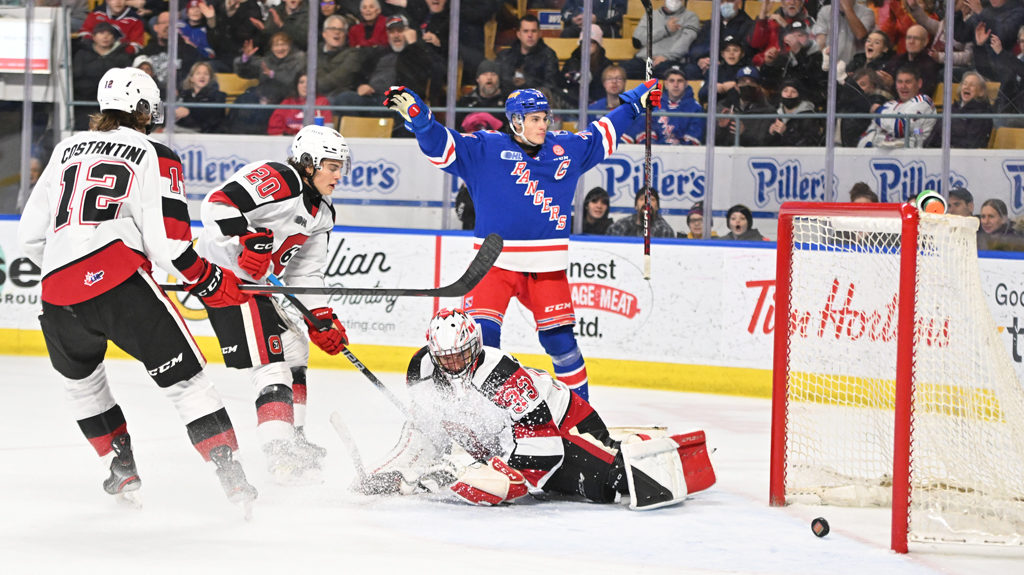 For the first time in six games, the Rangers scored the opening goal of the contest. Just 1:43 into the first period, Danny Zhilkin (Winnipeg Jets) collected the puck in the Rangers zone. Skating end-to-end and then from the left face-off circle to the right, Zhilkin fired a shot across his body over the glove of Collin MacKenzie. Then, just as Kitchener’s second power-play of the period expired, they doubled their lead to earn a 2-0 advantage. Hunter Brzustewicz made a great play at the blueline to keep the puck in the zone.  Pinelli and Zhilkin connected on a pass before finding Francesco Arcuri (Dallas Stars) at the right face-off dot who fired the puck into the net past the sprawling 67’s netminder.

Kitchener led 2-0 and shots favoured the Rangers 16-6 after 20 minutes of play.

Kitchener held strong against league’s third-ranked power-play as they killed off six minutes of shorthanded time in the middle frame. No team could find the back of the net until a fortuitous bounce found the stick of Pinelli. A cleared puck bounced over the stick of the 67’s defender at the Ottawa blueline with Pinelli pouncing on the puck and skating in for a breakaway. Pinelli made a fake shot on the forehand and then pulled the puck to his backhand before sliding the puck through the legs of the Ottawa goaltender to earn Kitchener a 3-0 lead with 16 seconds left in the period.

Ottawa made things interesting by scoring a shorthanded goal at 11:49 of the third period to make it a 3-1 game. Kitchener defended well and with just over 2:30 left in the game Ottawa pulled their goalie for the extra attacker. Zhilkin was the benefactor of a whiffed shot attempt by an Ottawa defender and slotted the puck into the empty net to make it a 4-1 game. Ottawa added a second goal to cut Kitchener’s lead in half with Caden Kelly scoring his third of the season, but that was as close as they would get.

Next Up: The Rangers will hit the road for two games this weekend. Saturday, Kitchener is in Sarnia for a 7 p.m. game against the Sting. Then, the Rangers face-off against the Knights in London Sunday at 2 p.m.