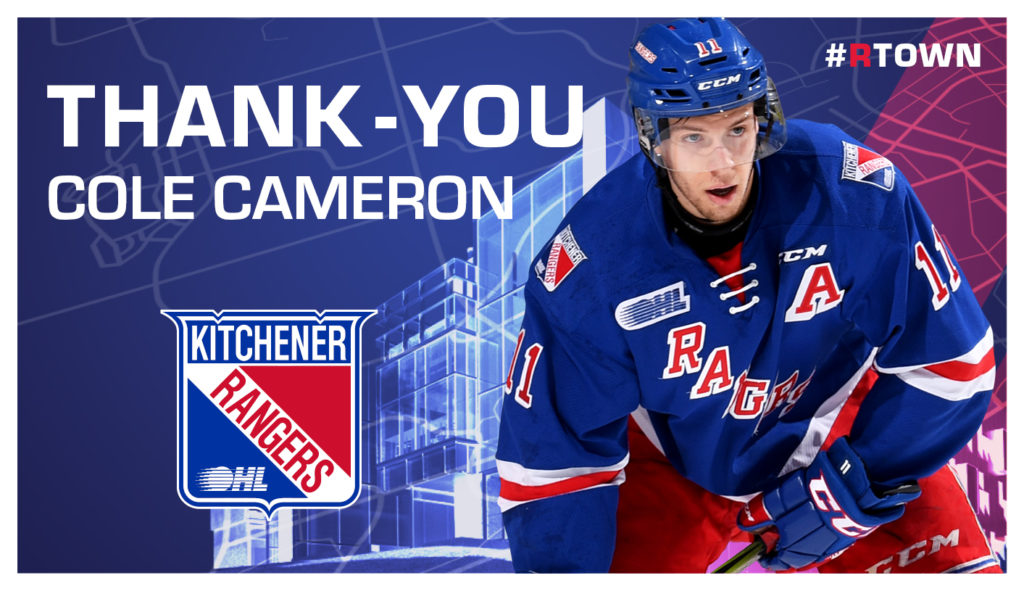 This season we have the opportunity of honouring three overage players. Today, we honour defenceman, Cole Cameron. Cole has only been a member of our team since December, but he has been a leader throughout his time here. We are so grateful to have Cole as a member of our team and are ecstatic he gets to finish his career here on East Ave.  He will truly be missed.

Cole Cameron has only been in Kitchener for four months, but you would never know it. He signed as a free agent in Owen Sound in 2016 and played the 2016-17 and 2017-18 campaigns there and the beginning part of this season in North Bay. Upon his arrival in KW, it was apparent he would fit in well here.

“I had the opportunity to play under a lot of amazing leaders throughout my time in the league, who all had different leadership styles,” said Cole. “One thing they all have in common is they all show up every day and work hard on the ice. I have learned to apply that to my game.”

As a member of our leadership core here, Cole has brought a lot of his experience to this team. Looking back on his career, he chalks that up to the knowledge he has gained over the years.

Being undrafted, Cole knew he was going to have to work extra hard to earn his spot. All his successes didn’t come without a lot of hard work and persistence. If he could give young players any advice, it would be to play and act like someone is always watching.

“You never know when your opportunities are going to come to fruition. Keep pushing yourself to work hard because you never know who is watching,” said Cole. “The first year in this league is always the hardest. Getting comfortable helps take the pressure off. For me, getting used to the arena and the community was a huge help.”

Looking back on his career, he has many moments he will never forget, but he hopes the biggest memories are yet to come.

“A highlight of my career for me has been playing in the playoffs. I played against Kitchener two years ago in the first round, and the atmosphere in here was amazing. It will be pretty cool to be on the other side of the equation this year,” smiled Cole. “I’m hoping we are able to make some memories during our playoff run this year.”

Since moving to KW, Cole has been on many community appearances and has been able to get to know Rangers Nation.

“It has been fantastic finishing my career here in Kitchener. Being able to play in front of a crowd of this capacity is incredible,” smiled Cole. “I get to meet these amazing people and find out where their season tickets are or ask how long they have been a fan. It’s really incredible to meet people from all walks of life. When you make a connection like that and you get to see them at the games is pretty special.”

If Cole knows one thing, it’s that his future will consist of hockey and a whole lot of tractors.

“After playoffs I see myself going back home and spending a couple of months on the tractor helping my dad and grandma on the farm,” laughed Cole. “I am trying to play at the highest level of hockey I can until that isn’t possible anymore.”

“I don’t know where I am going to go next, but I am focused on the present and looking forward to doing as well as we can in playoffs. I’ll figure it out after that,” said Cole. “I am really excited to get it really loud here at The Aud in playoffs and get that buzz going.”

The Kitchener Rangers would like to share our appreciation to Cole Cameron and all of our overage players including Kyle Gentles and Connor Hall. Earlier this week, we shared a story acknowledging Kyle Gentles and will be sharing Connor Hall’s early next week. We wish them the best and thank them for being a part of Rangers Nation.