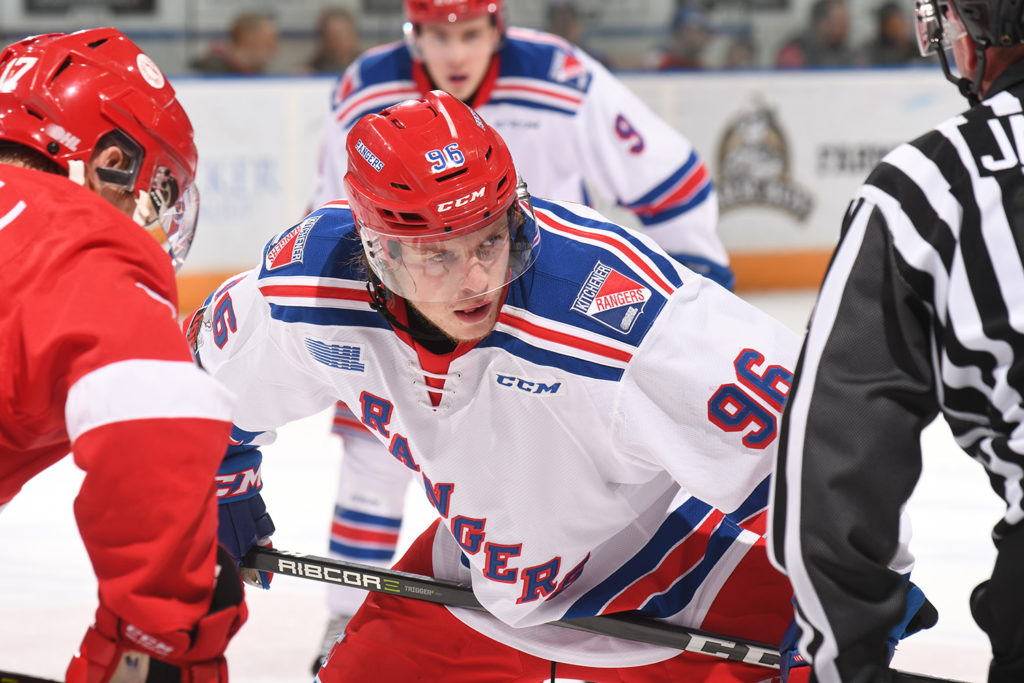 After a 1-1 stalemate through 40 minutes of play, the Sault Ste. Marie Greyhounds broke the game open in the third period with a pair of empty net goals en route to a 4-2 win over the Kitchener Rangers in front of 4,729 fans at the Essar Centre in Game 2 on Saturday night.

The Greyhounds lead the best-of-seven series, 2-0, with Game 3 scheduled for Monday, April 23 at 7pm at The Aud.

For the second straight night it was the Rangers who opened the game’s scoring, as Adam Mascherin scored his seventh of the playoffs just 1:44 in, from Logan Stanley and Rickard Hugg, as the Blueshirts would maintain the one-goal lead into the first intermission.

The Rangers thought they had taken a 2-0 lead on a goal by Mike Petizian, but after a lengthy review it was ruled the play was offside breaking into the offensive zone.

Despite not being able to attain the two-goal lead goaltender Mario Culina did his part – and more – to keep momentum in the Rangers favour as the Soo native made an incredible, point-blank save to keep the Greyhounds off the board and the Blueshirts in the lead.

Culina would finish the night surrendering just two goals on 30 Greyhounds shots, making 28 saves. Two hundred feet away Matthew Villalta picked up his second win of the series, allowing two goals on 36 shots by the Rangers.

The Greyhounds finally got on the board at the 11:18 mark of the second period when Morgan Frost made it a tie game, 1-1, from Boris Katchouk and Taylor Raddysh.

Katchouk’s first of the game and 12th of the playoffs gave the Hounds their first lead of the night, 2-1, from Jordan Sambrook and Raddysh at 7:50.

With the Rangers awarded a late power play they elected to pull Culina in favour of 6-on-4 play, but Katchouk emphatically buried the puck into an empty net while shorthanded to increase the Soo lead to 3-1.

The Rangers cut the lead to 3-2 on a goal by Stanley with 27 seconds left to play, but again, with the goalie pulled, the Greyhounds potted an empty netter to seal the game, and the win, 4-2.

The Rangers were 0-for-4 on the power play, while the Greyhounds were 0-for-1 with the man advantage.