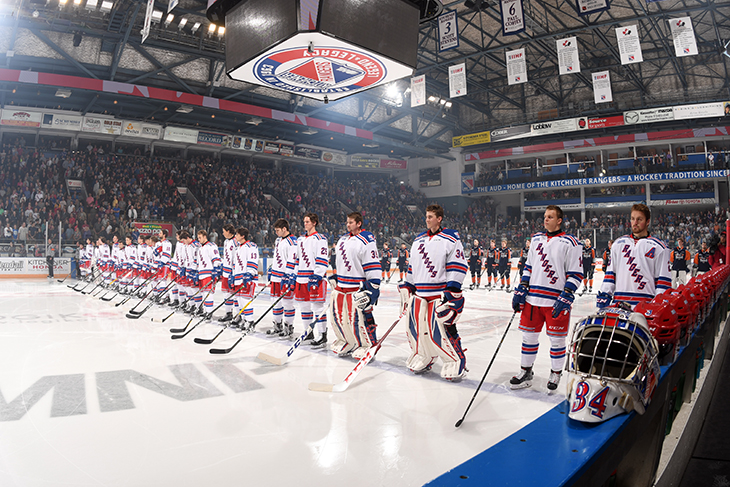 The Flint Firebirds scored two goals in a span of 37 seconds with just over two minutes remaining in regulation to spoil the Kitchener Rangers’ home opener, rallying to a 5-3 win in front of 6,755 fans on Friday night at The Aud.

The story of the game was the high number of power plays – and the amount of times they were capitalized on by the visitors – as the Rangers were whistled for eight minor penalties; three for delay of game and one for too many men.

Certainly the number of penalties, but also their nature was something that didn’t sit well with head coach Jay McKee following the game.

“Having three delay of game, over-the-glass penalties hurt us,” McKee said. “We should have three of those penalties after 30 games, [not during our first]. It’s disappointing. Apart from that we had another [five] penalties.

“Games are won and lost through discipline and having good special teams, and tonight I’m really disappointed in the fact that we gave up the number of power plays that we did.”

Flint would finish the game 3-for-8 on the power play, while Kitchener was 2-for-4 with the man advantage.

The Rangers, despite the plethora of penalties taken, seemed to have all but tied a bow on their season opener in front of their fans on East Ave, as they led 3-2 with just over two minutes left on the clock.

Luke Richardson had given an impressive performance despite the lopsided number of times his team was left with a man down, and the near-40 shots strewn his way.

The 18-year-old Barrie, ON native made a number of flashy, key saves throughout the night but ultimately was saddled with the loss, surrendering four goals on 38 shots.

His counterpart, Garrett Forrest, was awarded the win, allowing three goals on 33 shots. 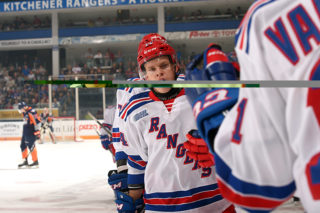 Adam Liška opened the 2017-18 scoring for the Rangers, giving the team a 1-0 lead at 6:11 of the opening period. It was the first goal scored against the Firebirds in their franchise’s history in a season opener, as the team boasted 4-0 and 3-0 shutout wins over the Saginaw Spirit in 2016-17 and 2015-16, respectively. Connor Hall and Greg Meireles earned the assists on the game’s opening goal.

With the Rangers already down a man after a hooking infraction, they were dealt another minor penalty after being called for delay of game, giving the Firebirds a 5-on-3 man advantage. Just 38 seconds into the 5-on-3, Ty Dellandrea notched the game at 1-1, from Nicholas Caamano and Nicolas Mattinen, at 11:51.

With the period in its final minute the Firebirds pounced on what looked to be a prime opportunity, as a shot that got a piece of Richardson and trickled in the blue paint of the crease just along the goal line. Richardson acrobatically reached back and smothered the puck without incident, making the save.

Shots on goal after the first period of play were 12-6 in favour of the visitors.

The Rangers tallied their first power play goal of the game from the stick of last season’s leading scorer, Adam Mascherin, who returned to action for the first time after missing all Rangers’ exhibition action following off-season shoulder surgery. 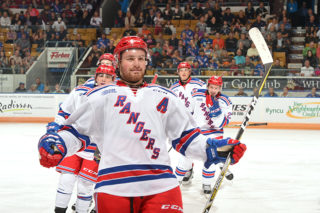 Mascherin, on the far side near the top of the circle, ripped a one-timer from a Joseph Garreffa pass to beat Forrest and restore the lead for Kitchener, 2-1. Giovanni Vallati earned the second assist on the goal, which came at 5:40 of the second period.

Hunter Holmes once again tied the game for the visiting Firebirds, this time 2-2, with Nicholas Caamano and Nicolas Mattinen picking up the pair of assists at 11:13.

The second power play goal of the game for the Rangers came on the stick of Riley Damiani, putting the Rangers up 3-2 after tipping in an errant pass which beat the Flint goaltender five-hole at 13:19. Assists on Damiani’s first of the season were the first OHL points for both Rickard Hugg and Jack York.

The teams would skate into the second intermission with the Rangers leading 3-2, but Flint leading on the shot clock, 24-19.

The Rangers looked poised to win their second consecutive home opener until the tide turned with just over two minutes to play in the game.

At 17:38, Fedor Gordeev tied the game with Flint’s second power play marker of the night, making it a 3-3 game with just 2:22 left on the clock from Maurizio Colella and Jake Durham. Just 37 seconds later Dellandrea scored his second of the game, assisted by Caamano, which gave Flint its first lead, 4-3, and also proved to be the game winner at 18:15.

The visitors secured the come-from-behind win with an empty net goal by Durham with 25.9 seconds remaining on the clock to cap off the 5-3 stunner.

Final shots on goal were 39-33 Flint, including 15-14 for the visitors in the third period.

Mascherin, Hall and Jake Henderson each wore an “A” and skated as alternate captains to newly dubbed captain Connor Bunnaman.

The Rangers are back on the ice tomorrow night, Saturday, September 23rd when they travel to Sarnia to take on the Sting at 7:05pm. The Rangers head to Windsor to do battle with the Spitfires on Thursday, September 28th at 7:05pm before returning home a week from tonight, Friday, September 29th at 7:30pm when they host the Owen Sound Attack.