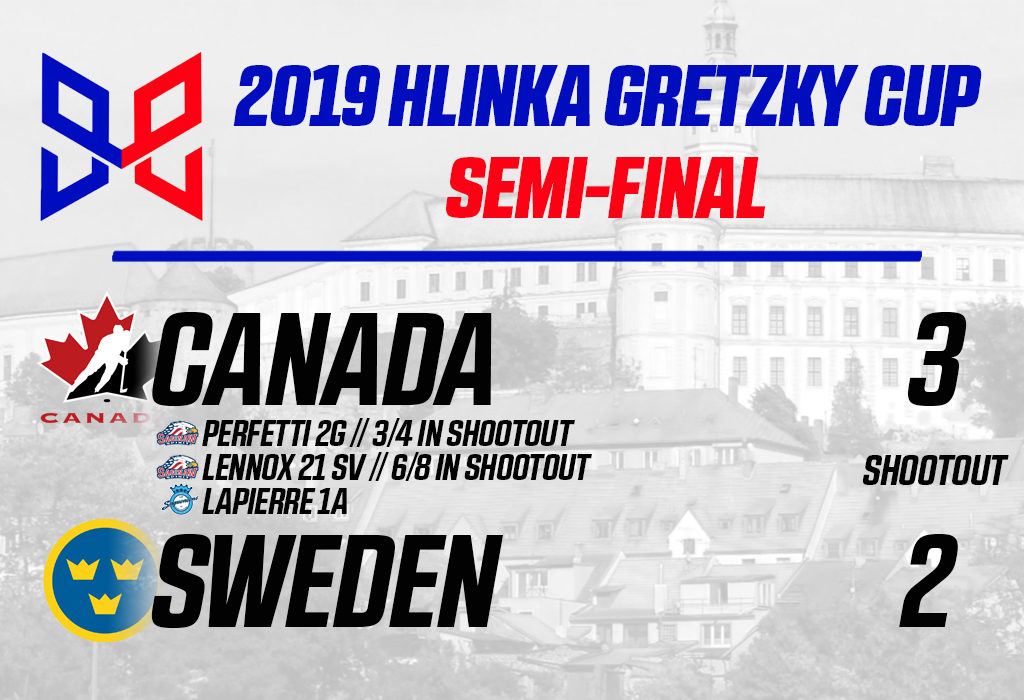 Cole Perfetti would not be denied.

The Saginaw Spirit standout notched a pair of tallies in regulation then added another three goals through eight rounds of shootout action to guide Canada to a 3-2 victory over Sweden and send his squad to Saturday’s gold medal game at the 2019 Hlinka Gretzky Cup.

After scoring once through the initial five-player shootout, Team Canada head coach Michael Dyck of the Vancouver Giants called on Perfetti four more times as he came away with three goals, including the tying marker as well as the eventual game winner. Entering Friday’s contest, Perfetti had recorded five goals and two assists through three preliminary tilts, a continuation of his impressive debut season in the Ontario Hockey League in 2018-19 in which he led all freshmen with 37 goals and 74 points. The native of Whitby, Ont., is eligible for the 2020 NHL Draft.

Between the pipes, Canada got another solid showing from goaltender and Perfetti’s Spirit teammate in Tristan Lennox, who turned aside 21 of 23 shots to bring his tournament save percentage to .950. Meanwhile, Canada directed 41 shots toward Swedish netminder Jesper Wallstedt, who was selected by the Moose Jaw Warriors with the 46th pick in the 2019 CHL Import Draft.

Elsewhere Friday, Russia defeated Finland by a 4-1 score, setting up a Canada versus Russia affair in Saturday’s gold medal game. Canada is aiming for its third-straight gold medal win at the Hlinka Gretzky Cup (previously known as the Ivan Hlinka Memorial Tournament). In all, Canada has won 22 gold, two silver, and one bronze, medalling in all but three years since the tournament began in 1991. Russia’s last gold in the tournament came in 1995.