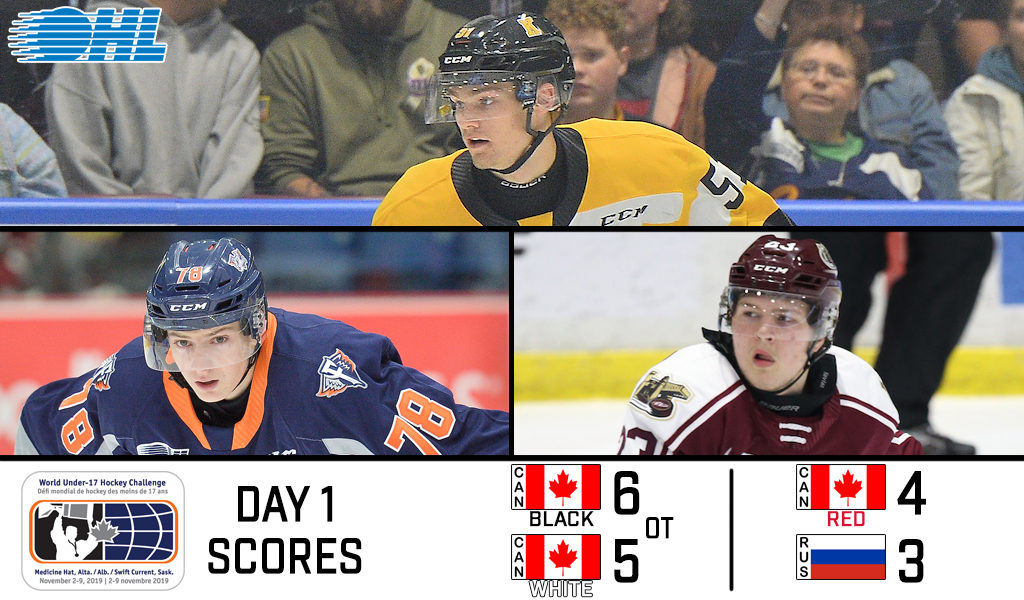 The 2019 World Under-17 Hockey Challenge got underway in Medicine Hat, Alta. and Swift Current, Sask. on Friday, kicking things off with a pair of one-goal outcomes.

Canada White led 4-1 at the midway point of the second period before Canada Black charged back to tie things up on a pair of Wright third period markers.

“We obviously knew we were down and knew there were some things we needed to fix as a team,” said Wright post-game, “but we just stuck together and stuck to the way we know we can play. We knew we had a chance to come back, and we were able to get the win.

“All the countries here are well represented with a lot of great players, so the intensity is going to be ramped up a notch above most games I have played in before. Our game tonight was fast and physical, and it was fun to play against such good competition.”

Benjamin Gaudreau (Sarnia Sting) made eight saves for Canada Black in the victory as the two teams went toe-to-toe right down to the wire.

Canada Black returns to the ice on Monday afternoon, taking on the Czech Republic in Medicine Hat while Canada White looks for its first win on Monday night against the United States, also in Medicine Hat.

Canada Red 4, Russia 3
Swift Current, Sask. – Connor Lockhart (Erie Otters) and Jacob Holmes (Soo Greyhounds) both had assists as Canada Red got off to a winning start at the 2019 World Under-17 Hockey Challenge.

Canada Red jumped out to a 3-0 lead before holding on to defeat Russia 4-3.

Logan Stankoven (Kamloops Blazers) headlined the Canadian effort with two goals as they outshot the Russians 43-31.

For full coverage of the 2019 World Under-17 Hockey Challenge, visit hockeycanada.ca.