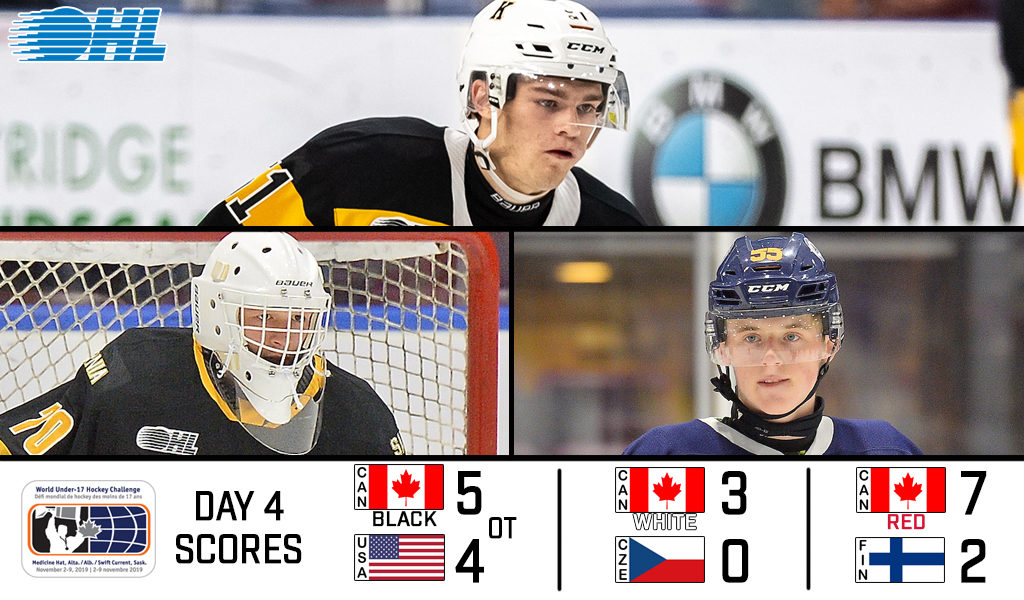 The preliminary round of the 2019 World Under-17 Hockey Challenge in Medicine Hat, Alta. and Swift Current, Sask. wrapped up on Tuesday with all three Canadian teams claiming victory to advance to Thursday’s quarter-finals. Here’s a look at Tuesday’s action.

The thrilling Canadian victory included a 29-save effort from goaltender Benjamin Gaudreau (Sarnia Sting) while James Malatesta (Quebec Remparts) scored twice. Brennan Othmann (Flint Firebirds) also found the back of the net for Canada Black while Brandt Clarke (Barrie Colts) had two assists and Ryan Winterton (Hamilton Bulldogs) had one.

“Coach stressed the importance of faceoffs, and that one near the end of the game was crucial,” said Canada Black defenceman Brandt Clarke. “Shane Wright came up clutch with a clean [faceoff] win back to Jérémy Langlois and our forwards were able to tie up [the American] forwards. I had a lane to the net and I thought I scored, but it looks like Danny Zhilkin tipped it in. I don’t mind getting the assist, we tied up the game and ended up winning. That’s all that matters to me.”

Knowing they’d need to win in regulation to leapfrog the Americans for first place in Group A, Canada Black pulled Gaudreau in the game’s final minute but was unable to score the go-ahead goal.

Canada Black secures second place, advancing to Thursday’s quarter-final when they will take on Russia (1-1-1) in Medicine Hat.

The Canadian effort was led by a four-point effort (2-2–4) from Nathan Gaucher (Quebec Remparts) while goaltender Thomas Milic made 39 saves.

Canada Red rebounds from a loss to Sweden to finish second in Group B with a 2-1-0 record, advancing to face Canada White in Thursday’s quarter-final matchup in Swift Current.

Tyler Brennan (Prince George Cougars) posted a 23-save shutout as Canada White wrapped up the preliminary round with a 1-1-1 record. They’re set to face Canada Red in quarter-final action on Thursday night in Swift Current.

For full coverage of the 2019 World Under-17 Hockey Challenge, visit hockeycanada.ca.