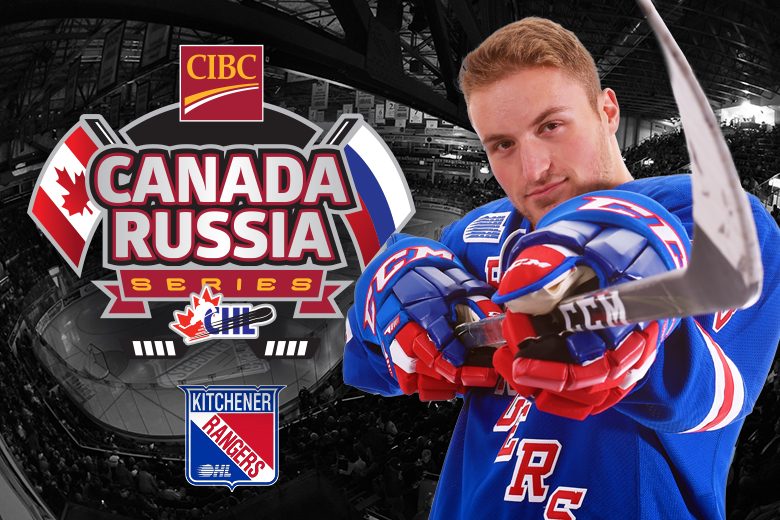 Raddysh, who leads the OHL in scoring with 45 points (18-27–45) over 19 games, scored twice in a second period OHL scoring flurry of three tallies in under two minutes to take control of the game.

“Of course you always like to see your players do well,” said OHL assistant coach Kris Knoblauch, who coaches Raddysh in Erie. “It was a real positive night for him and I thought he had a strong game especially considering this was his fourth game in four days. He’s a goal scorer and he scored a couple nice goals tonight.”

OHL goaltender Michael McNiven (Owen Sound Attack) also earned high praise for his performance after turning aside 25 shots, many of them on high quality chances.

“Michael was a difference maker tonight,” Knoblauch noted. “We got off to a very slow start in the first period but we had great goaltending and if Michael doesn’t make as many key saves as he did, we might have had a different outcome tonight.”

McNiven was up to the task early, keeping Russia off the board in the first despite several big-time chances. He turned away consecutive opportunities from Danil Yurtaikin and Denis Alexeev in alone just shy of the midway point of the period before flashing the leather on Russian blueliner Kamil Fazylzyanov minutes later.

The OHL outshot Russia 11-9 in a scoreless first, but lost the services of Chicago Blackhawks prospect Graham Knott (Windsor Spitfires) in the opening two minutes of the game after he crashed into the Russian net and didn’t return.

Russia came out firing in the second as McNiven stopped an early three-on-one to keep the game scoreless, but wasn’t able to stop Denis Alexeev 6:30 into the period as the 19-year-old’s quick backhander gave Russia a 1-0 lead.

The OHL would come thundering back in the later half of the second though as the speed of Boston Bruins prospect Zach Senyshyn (Sault Ste. Marie Greyhounds) paid dividends. Senyshyn took a stretch pass from defenceman Jacob Friend (Owen Sound Attack), beating a Russian defender before tucking a backhander through the legs of Krasotkin at 14:48.

Raddysh was hauled down on a breakaway a shift later, beating Krasotkin over the blocker on the ensuing penalty shot at 15:42 to give the OHL a 2-1 edge.

That lead grew to two goals at 16:36 as Team OHL completed a flurry of three goals in under two minutes.

New Jersey Devils first round pick Michael McLeod (Mississauga Steelheads) snapped a clean faceoff win back to a waiting Raddysh, who quickly wristed a one-time release over the shoulder of Krasotkin from the top of the right circle for his second of the night.

Suddenly down 3-1, Russian head coach Valery Bragin called a timeout and opted to make a change in the crease as Krasotkin’s night came to an end after surrendering three goals on 21 shots.

The OHL carried a 3-1 lead into the third period, outshooting Russia 24-18.

Down two to start the third, Russia wasn’t done just yet.

After failing to convert on an early power play, defenceman Alexander Shchemerov brought Russia back to within one, taking a drop pass from winger Nikita Dynyak to send a wrister over the shoulder of McNiven at 4:10.

Tampa Bay Lightning prospect Boris Katchouk (Sault Ste. Marie Greyhounds) would reinstate the OHL’s two-goal lead with an assist from Raddysh at 6:41. Katchouk took advantage of a broken play, collecting the puck at the Russian blue line before using a defender as a screen to beat Vladislav Sukhachev over the shoulder.

Hamilton Bulldogs forward Will Bitten would add an empty net marker in front of the FirstOntario Centre crowd to seal the deal on the 5-2 win, improving the OHL’s all-time record in the CIBC Canada Russia Series to 23-4-1.

After a busy weekend of action with their club teams, OHL players didn’t show much in the way of fatigue in Game 4.

“We didn’t even skate this morning, but the guys came together well,” said OHL head coach Dominique Ducharme (Drummondville Voltigeurs). “I thought we did a good job through the course of the game getting better and better. I’m really happy with the effort.”

It’ll be a quick turnaround into the final two games of the 2016 CIBC Canada Russia Series as Team QMJHL looks to finish strong against Russia, hitting the ice for Game 5 on Tuesday at 7:00pm ET/4:00pm PT, a game that can be seen live on Sportsnet ONE, Sportsnet Pacific and TVA Sports 2.