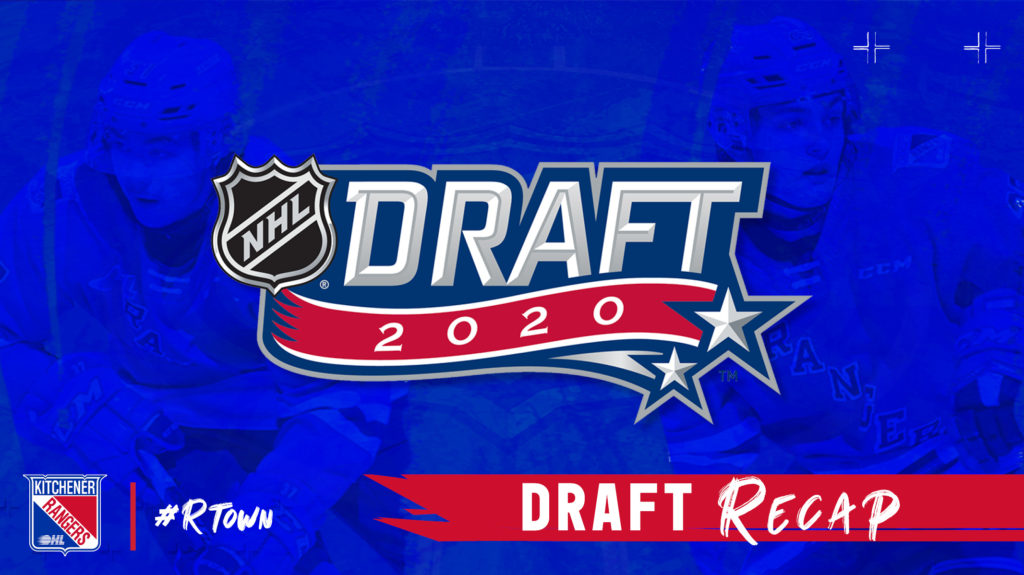 Donovan Sebrango and Declan McDonnell both heard their names called on the second day of the 2020 NHL Entry Draft held virtually on October 7th.

Sebrango became the first Blueshirt to be selected, going 63rd overall in the 3rd round by the Detroit Red Wings. This season he played in 56 regular season games for the Rangers, contributing six goals and career highs in assists (24) and points (30). Donovan was also among the 40 players selected across the CHL for the 2020 Kubota CHL/NHL Top Prospects Game held on Thursday, January 16th, in Hamilton.

Donovan spoke to Carley Johnston from the Detroit Red Wings on how it felt to hear his name called. “It was a crazy feeling, I can’t even put into words still now, how it feels, but I mean just hearing my name with all my family beside me its a crazy feeling I can’t even describe it. It’s a great honour to go to such a great organization like Detroit. But yeah, it’s a great feeling right now.”

General Manager and Head Coach, Mike McKenzie, also felt that great feeling for Sebrango and says that “Donovan had a great year for us and is very deserving of being selected with the first pick of the 3rd round. He has consistently played against the best players in the league since he arrived in the OHL, which is extremely rare for a young defenseman.” He goes on to say that “his skating and puck-moving ability, coupled with his grit and physicality, is a great mix. The Red Wings got a hardworking player that will only continue to get better. The Rangers are incredibly proud of Donovan and are excited to help him reach his next goal of signing an NHL contract with the Red Wings.”

In the 7th round, after a dramatic pause from the NHL Deputy Commissioner Bill Daly, Declan McDonnell would get the very last pick of the NHL Draft from the Tampa Bay Lightning, going 217th overall.

The 18-year-old, from Lake View, NY, played in 63 games this season and tallied an impressive 21 goals, 21 assists for a total of 42 points. Declan describes that he attained those stats by “just focus(ing) on playing in the moment, playing for the Rangers and the city.” McDonnell praises his dad for instilling a simple mindset of “always trying to be the best version of myself, on and off the ice.”

That approach finally paid off in April. After finishing the regular season with the third-most goals and points by an OHL rookie, his name was finally among those listed in the year-end NHL Central Scouting Rankings.

“It was great to see Declan get rewarded for all his hard work but also produced this year by being selected in the draft, “said Mike McKenzie. “He had a great season and showed not only his offensive skill and abilities but his tenaciousness and work ethic. We are looking forward to seeing him continue to grow as a player and work towards signing an NHL contract with the Lightning. The Rangers are incredibly proud of Declan.”