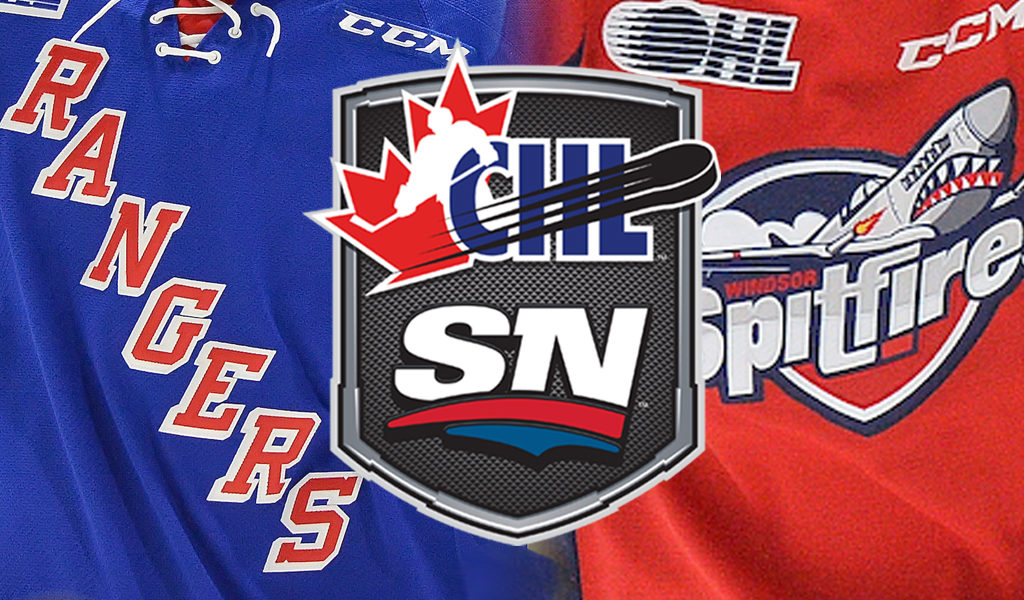 The Kitchener Rangers are heading to Windsor for a Sunday afternoon Sportsnet appearance.

The Blueshirts are looking to shake off a 6-2 loss at the hands of their Midwest Division neighbours the London Knights; a loss that ended the team’s five game winning streak. Following a 10-2 surge over the Kingston Frontenacs last weekend that saw a four-point showing from Jean-Luc Foudy, the Spits fell to the Owen Sound Attack by a 3-2 overtime tally on Thursday before dropping a 4-3 overtime loss in Flint on Saturday.

After rounding out the bottom of the Western Conference back in November, the Rangers have been able to turn things around significantly, working their way up to third place in the conference with respectable win streaks along the way. As it stands, they sit seven points back of the Conference-leading Knights at second in the Midwest with a 38-16-5-2-tally.The Spits skate in with points in their last five games, owning fifth place in the Western Conference at 34-19-8-0.

Captain Riley Damiani, a 2018 Dallas Stars draftee, leads the charge in Kitchener with 77 points (28-49—76), followed by league veteran Liam Hawel who’s posted 66 points, having joined the Rangers prior to the start of his overage campaign. Fellow overager Jonathan Yantsis owns a team-high 38 goals and 57 points over his 61 appearances this year, and another veteran presence in 21-year-old Florida Panthers pick Greg Meireles brings 57 points to the table. The addition of defender Axel Bergkvist in the offseason and power forward Serron Noel at the deadline have added an even greater scoring touch. Puckstopper Jacob Ingham, a Los Angeles Kings prospect, continues to post solid numbers with a .918 save percentage, 2.96 goals-against average and 31-8-4-1 record between the pipes.

The 2020 NHL Draft watch will centre on a pair of Windsor forwards in Will Cuylle and Foudy, with 42 and 43 points respectively on the year. Kitchener defenders Donovan Sebrango and Ville Ottavainen are also eligible, as is left winger Reid Valade who recently returned from injury.

Sunday afternoon will see the fourth and final matchup of the two Western teams. Kitchener skates into the contest ahead on the season series at 2-0-1-0.

The puck drops at 2:00pm on Sunday afternoon and the action can be seen across the country on Sportsnet.