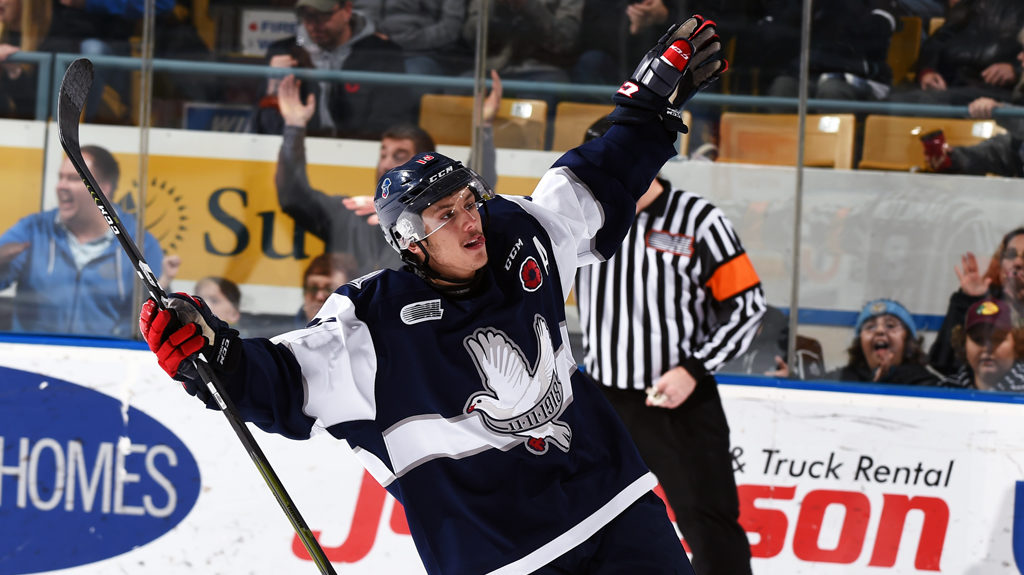 Kitchener, ON.: The Sarnia Sting and Kitchener Rangers engaged in a back-and-forth affair on Friday. After 60-minutes of play, the game was tied 5-5, which sent the affair to overtime.

The extra five-minutes solved nothing and that forced the game to be decided in a shootout.

In the shootout, Rickard Hugg scored Kitchener’s third goal, which was followed up by a save from Lucas Pfeil to help the Rangers win the shootout 3-2, and 6-5 overall.

Lucas Pfeil stopped 30 shots in the win and his most important save of the night came against the final. Riley Damiani, the game’s first star, picked up two goals and an assist on the night.

Kitchener opened up the scoring at 3:25 of the first on Arber Xhekaj’s first goal of the season, unassisted, which put the Rangers up 1-0.

Sarnia responded in kind 24-seconds later with a goal by Ryan McGregor, his seventh, and that made the game 1-1 early on.

at 5:28 of the opening frame, the Sting took their first lead of the game on a goal by Justin McCombs, his second of the season, and it was 2-1.

The Rangers didn’t take long to reestablish parity with the Sting. At 7:13, still in the first period, Riley Damiani netted his seventh of the season to make it 2-2.

Isaac Langdon and Jonathan Yantsis picked up assists on the goal.

Then, at 10:10, Sarnia took the lead for the second time that period on Curtis Egert’s first goal of the season, 3-2.

Sarnia’s Sean Josling took the game’s first penalty at 4:59 of the second period. While on the powerplay, Kitchener got caught in an odd-man rush that resulted in Sarnia’s Calvin Martin scoring his fifth and doubling the Sting’s lead, 4-2.

Jonathan Yantsis, off a wrist shot from the Hughes’ right hashmark, fired home his team-leading 14th goal of the season with assists from Justin MacPherson and Greg Meireles to bring the Rangers within one, 4-3.

One minute and fourteen seconds later, at 15:24, Damiani, on a wraparound while falling, netted his second goal of the game and third point of the night and suddenly the Rangers and Sting were tied, 4-4.

Then, at 16:05 of the middle frame, Franco Spoviero of the Sting manage to restore Sarnia’s one-goal lead to put the Rangers down one, 5-4.

Off a faceoff, and with just 9-seconds left in the second, Rickard Hugg fired home his 9th of the season and made it 5-5 going into the final frame.

Outside a Chase Campbell high sticking penalty and a puck to the face of McCombs that resulted in the Sting player missing a few shifts, the third period produced no goals and the game was forced into overtime with Kitchener leading in shots 36-34.

Overtime also didn’t produce anything for either side and that brought the game to a shootout.

The shootout was decided on the fifth shooter. Rickard Hugg buried one for the Rangers and that put the game on Sarnia’s Josling, who was stuffed by Pfeil to give the Rangers a win in the shootout 3-2, and overall, 6-5.

Kitchener returns to action on Sunday, November 11 at 2:00 pm when they play the Knights in London. The Rangers next home game is Friday, November 16 at 7:30 pm versus the Saginaw Spirit.