Rangers bounce back with road win in Game 2 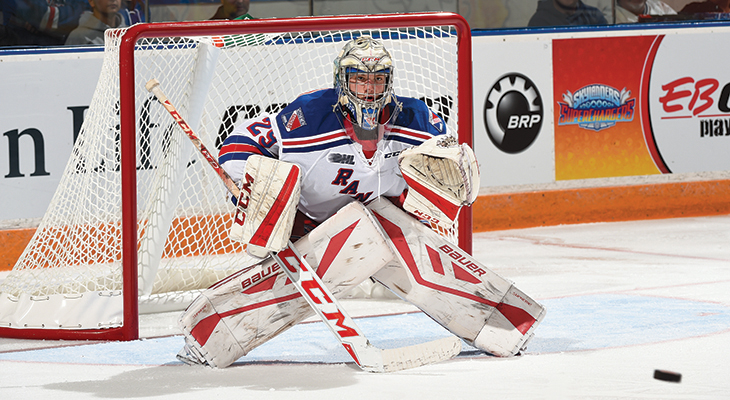 What a difference a day makes.

24 hours after suffering a discouraging 9-1 defeat at the hands of the Owen Sound Attack (1-1) Friday night in Game 1, the Kitchener Rangers (1-1) dug deep for a win of their own, claiming a hard-fought 2-1 victory in Game 2 of their best-of-seven opening round playoff series at the Harry Lumley Bayshore Community Centre on Saturday night.

After earning a split on the road in the first two games, the series shifts to the Kitchener Memorial Auditorium for Game 3 on Monday, March 27th at 7pm.

For more info or to purchase tickets to Games 3 and 4, click here.

But maybe the biggest component to the Rangers success on Saturday was the bounce-back performance by starting goaltender Luke Opilka (1-1). The St. Louis native turned aside an impressive 40 shots, including 19 in the second period and 15 in the third. After the Attack struck in the opening minute of the game to take an early 1-0 lead Opilka shut the door, standing in for 59:27 minutes of shutout hockey. With his counterpart, Michael McNiven, on the Owen Sound bench in favour of an extra attacker in an attempt to tie the game, Opilka made yet another key save with close to 10 seconds to play to secure the Rangers’ victory.

McNiven (1-1) was dealt the loss in goal for the opposition, allowing two goals on 26 Kitchener shots on goal.

The game didn’t get off on the right foot for the Rangers, as the Attack found themselves with a 1-0 lead just 33 seconds after puck drop. Petrus Palmu notched his second of the post season, with Ethan Szyula and Santino Centorame picking up the assists.

The Blueshirts would answer back however, as Mascherin unloaded his powerful wrist shot to beat McNiven high blocker side, tying the game 1-1 from Joseph Garreffa and Erie Guest while on the power play.

Shots on goal were 8-7 Kitchener in the first period of play, and 19-8 Owen Sound in the scoreless second period for a total of 26-16 Attack after 40 minutes.

Yantsis’ game winner came at 4:44 of the third period, scoring his first career OHL playoff goal to give the Rangers the 2-1 lead. Mascherin picked up the lone assist.

Kitchener was 1-for-6 on the power play, while Owen Sound was 0-for-4 with the man advantage.

The Rangers were without forward Connor Bunnaman, who served the first of an automatic two-game suspension for a slew-foot during Game 1.

A reminder to Season Ticket Holders that pre-purchased playoff packages that tickets can be picked up at the Aud Box Office this weekend; Saturday from 10am-8pm and Sunday from 11am-5pm.