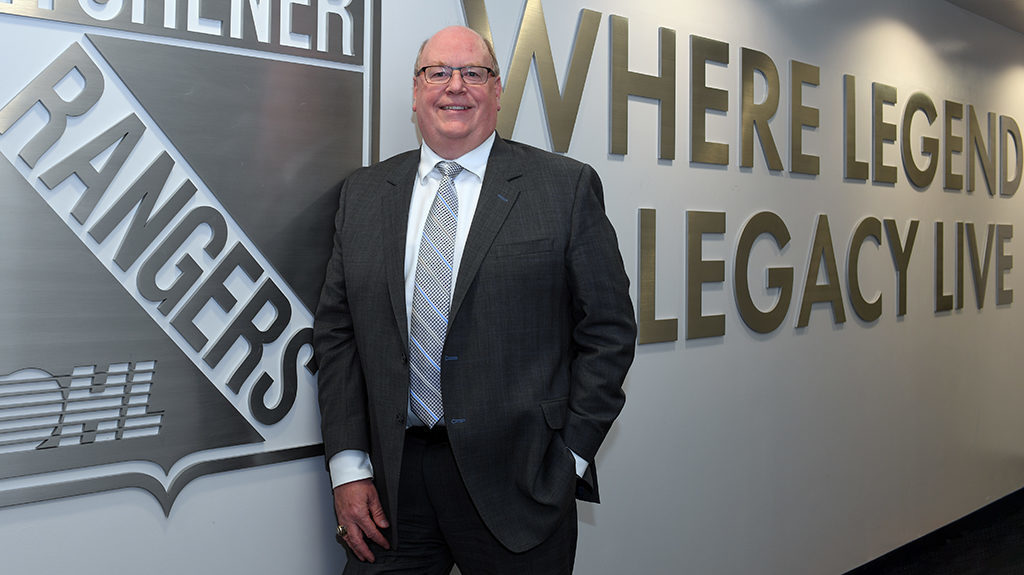 After 18 years as the Kitchener Rangers Chief Operating Officer & Governor, Steve Bienkowski has announced his plan to retire in June 2020.

“It is something that I have been working closely with our President and Chairman of our Board, Shawn McKelvie on during the last eighteen months. The timing had to be right as I wanted to ensure that two specific items were realized before making this decision.

Firstly, that we have a talented and skilled staff in place, which we have on both the hockey and business management sides of our operations. It is these people that will contribute to our organization’s future successes.

And secondly, that our finances were in good shape after the most recent spectator seating, video scoreboard and player facilities expansions in 2012. Our board trusted me to not take chances but instead a calculated risk with this expansion plan. It has provided the seating capacity for more Rangers fans to attend games while enjoying state of the art video board capabilities and equally important it provided our players and staff facilities that are in line with professional teams. Our organization has now navigated through this business plan to a point of increased financial strength and I am confident that the Rangers will have the resources soon to announce even further support for the community that has enthusiastically supported the Rangers for so many years,” said Bienkowski.

Bienkowski became the Rangers first Chief Operating Officer in addition to its permanent OHL Governor in 2002 after serving six years on the Rangers Executive Committee. Synonymous with professionalism on and off the ice, he has been essential to the Rangers success for nearly 40 years.

Originally from Oshawa, he first joined the Rangers in 1979 as a player. He was a member of the Rangers first Ontario Hockey League (OHL) championship team in 1981.

After graduating from Wilfrid Laurier University, he joined Ernst & Young becoming a chartered (CPA, CA) accountant in 1986 and enjoyed a successful business career prior to joining the Rangers.

For all his contributions, he has twice received the OHL’s Executive of the Year award, been awarded Kitchener-Waterloo’s Citizen of the Year in 2011 and was named to the Waterloo Region Hall of Fame in 2019.

His lead role in assembling a bid to host the Memorial Cup resulted in it being awarded to Kitchener in 2008. It is widely recognized as one of the most successful and memorable sporting events in Waterloo Region sporting history.

Steve demonstrated his strong understanding of the OHL player experience when commenting on one of his management philosophies when he said, “Although I have always tried to stay at arms length from our players, my hope over the years is that they understand that this was out of respect. Having been in their shoes, I remember the various pressures they face as teenagers growing up as elite athletes in the spotlight and, at times, in a high-pressure environment. My responsibility was not to become best friends, but instead provide an environment for them that respected them as individuals and provided them facilities and support that allowed them to become the best players, students, and – more importantly – people they could be.”

McKelvie, a director at the time Bienkowski was hired, said it was his diverse background that made him the right person.

“He understood our organization and relied on his experiences as a player, Director, and President and Chairman of our Board. His business background and vision has been essential in transforming our organization to where we are today but equally important has been his ability to execute this vision.”

The Rangers’ board will launch an immediate search for a new Chief Operating Officer & Governor.

McKelvie said with the Rangers success and respected reputation under Bienkowski’s watch he expects the board to be contacted by many qualified applicants.