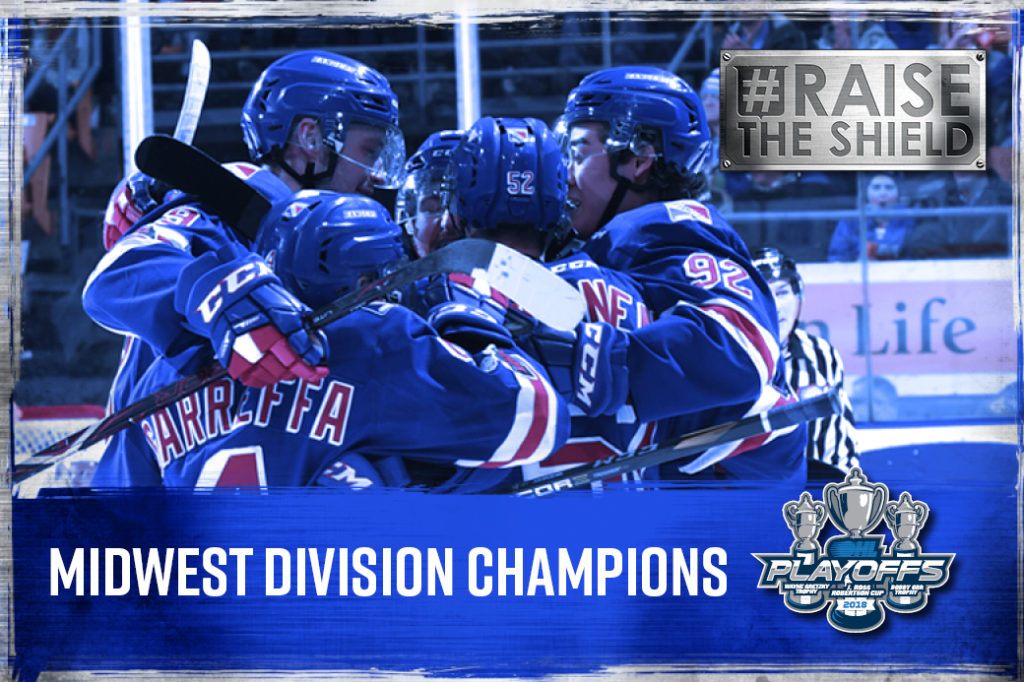 The Kitchener Rangers registered a season-high 47 shots on goal and outmuscled the Sarnia Sting, 5-2, in front of 6,520 fans at the Kitchener Memorial Auditorium on Tuesday night, clinching their first Midwest Division title since 2008.

Mario Culina (15-9-2-0) was once again steady between the pipes to lead the Rangers to victory, turning aside 27 of 29 Sting shots.

Kitchener has now won all three meetings against Sarnia so far this season, with their final meeting slated for next Wednesday, March 14 at Progressive Auto Sales Arena at 7:05pm.

Adam Liška opened the game’s scoring with his 12th of the season, assisted by Nick McHugh and Greg Meireles at 9:42 of the first period.

Just over a minute later at 10:51, Adam Mascherin was sprung on a breakaway and hooked, thereby awarded a penalty shot but was stopped by Fazio.

It was the Sting who would strike next on the power play, as Jordan Kyrou took the league lead in scoring with his 106th point and 37th goal of the season to tie the game, 1-1, from Michael Pezzetta and Cam Dineen.

The Sting led 15-14 in shots after the first period of play.

With the Rangers on the power play it was the Sting who capitalized early in the second period as Jonathan Ang made it 2-1 Sarnia at 4:10, shorthanded, from Jordan Ernst and Nick Grima.

But just past the midway point of the period the Rangers would once again make it a tie game as a great drive to the net and secondary effort by Givani Smith made it 2-2, his 17th of the season, from Kole Sherwood and Rickard Hugg, at 11:29.

Connor Bunnaman restored the lead for the Blueshirts at the 16:00 mark, his 27th of the season, from Joseph Garreffa and Adam Mascherin to make it 3-2 Kitchener and round out period scoring.

Shots on goal through 40 minutes favoured the Blueshirts, 30-24.

Hugg’s sixth of the season came by way of the power play and extended the Rangers lead to 4-2, from Jonathan Yantsis and Liška at 12:44, then with Fazio on the bench in favour of an extra attacker, McHugh banked one into the empty net to make it 5-2 at 17:25. Connor Hall – who finished the game with a plus/minus rating of +5 – and Meireles earned the assists on the goal which capped off the game’s scoring.

The Rangers were 0-for-8 on the power play, while the Sting were 1-for-4 with the man advantage along with a shorthanded marker.

Logan Stanley, Adam Mascherin, and Connor Hall each wore an “A” and skated as alternates to Rangers’ captain Connor Bunnaman.

The Rangers host the Sault Ste. Marie Greyhounds on Friday, March 9 at 7:30pm then welcome the Saginaw Spirit to town on Sunday, March 11 at 2pm.

Kitchener’s final home game doubles as their last regular season game, as they host the Guelph Storm on Friday, March 16 at 7:30pm for Fan Appreciation Night.