Rangers close out regular season with loss to Storm 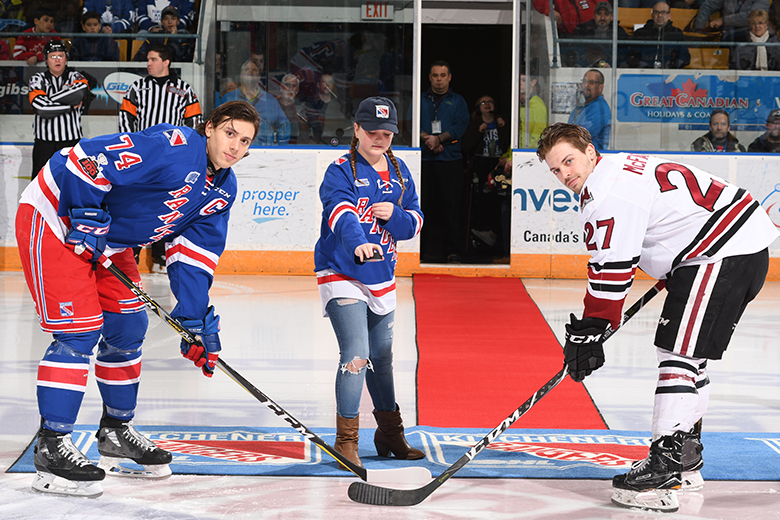 The highlight of the night was the first career goal by Rangers’ rookie defenceman Michael Vukojevic in his 24th game, which had given the Blueshirts their first – and only – lead, in the game’s second period.

Eric Guest and Greg Meireles were the other goal scorers for Kitchener, who still await their first round playoff opponent.

The Storm remain in sixth place with 69 points and one game remaining (at ER). The seventh place Spitfires (at FLT, vs SAG) and eighth place Spirit (vs LDN, at WSR) each sit at 66 points. Both were idle Friday night.

A win by the Storm tomorrow night in Erie would secure sixth place for Guelph and have them face the Sarnia Sting in the opening round, leaving the Rangers to face either the Spitfires or Spirit in Round 1. If the Storm lose tomorrow, the match-ups would come down to the final day of the regular season.

On Friday, Cedric Ralph gave the Storm a 1-0 lead just under five minutes into the game, from Barret Kirwin and Garrett McFadden, at 4:47.

Before the period was out the Storm would reclaim the lead as Mason Primeau’s seventh of the season, from Cam Hillis and Isaac Ratcliffe, made it 2-1 for the visitors through 20 minutes.

Shots on goal after the opening frame favoured the Rangers, 13-9.

The Blueshirts tied the game once again, this time in the opening seconds of the second period with a goal by Meireles, his 13th of the campaign, from Nick McHugh to make it 2-2 at the 31 second mark.

Kitchener took their first lead of the night on the stick of Vukojevic – the first of his OHL career – to put the Rangers up 3-2 at 3:08, from Joseph Garreffa and Givani Smith. 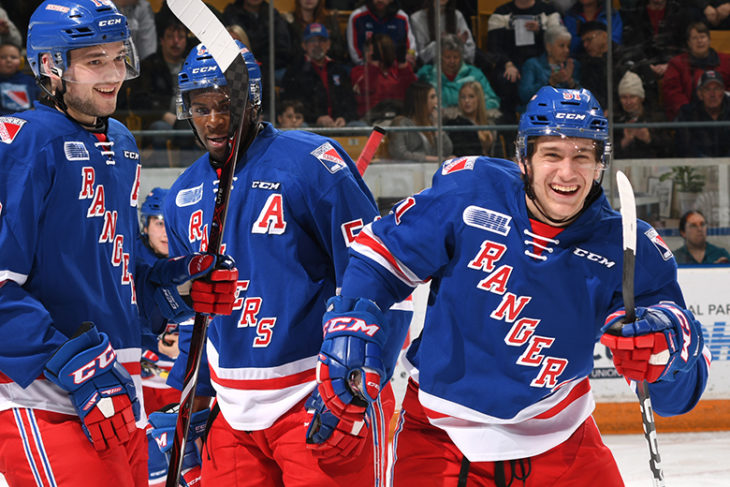 That lead was short-lived, however, as Ralph’s second of the game tied things up, 3-3, assisted by Owen Lalonde and Mark Woolley at 4:54.

Before the period was out the Storm would reclaim the lead on Ratcliffe’s 40th of the season, from Woolley, at 16:23 to make it 4-3 Storm at the end of two periods.

The first penalty of the game was called on the Rangers for Holding at 10:42 of the third period, then another for Hooking was called just 19 seconds later giving the Storm a 5-on-3 man advantage for 1:41.

With four seconds remaining on the two-man advantage the Storm capitalized for their first two-goal lead of the night, as Hillis scored his 20th of the season, from Ryan Merkley and Liam Hawel at 12:38.

Alexey Toropchenko rounded out the game’s scoring with an empty net goal at 19:43, to ice the 6-3 final.

The Rangers were 0-for-1 on the power play, while the Storm were 1-for-2 with the man advantage.

Logan Brown, Kole Sherwood, and Givani Smith each wore an “A” and skated as alternates to Rangers’ captain Connor Bunnaman.

Kitchener’s first playoff game – regardless of opponent – will take place next Friday, March 23 at 7:30pm when they host Game 1. Game 2 will go Sunday, March 25 at 7pm at The Aud.

Kitchener Rangers playoff tickets are on sale now. More information – including how fans can purchase – can be found here.