Rangers draw even with Game 4 win in Sarnia 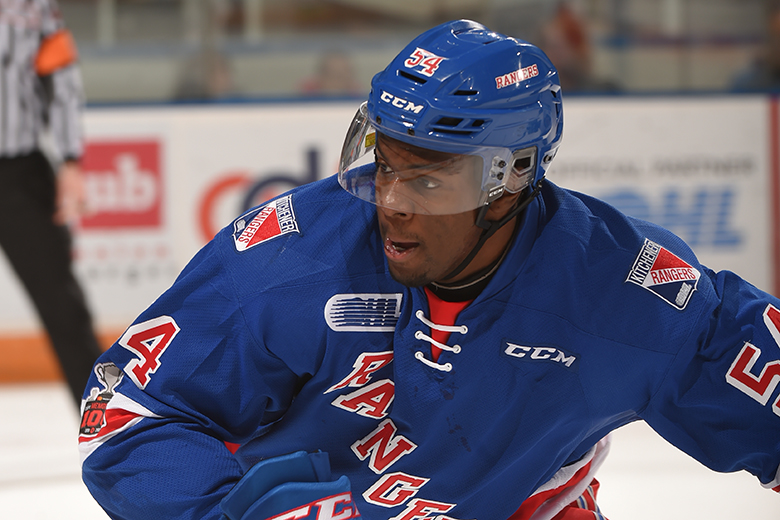 Make it a best-of-three for the second straight playoff series.

The Kitchener Rangers scored twice in the third period to skate to a 5-3 win in front of 4,289 fans at Progressive Auto Sales Arena in Game 4 on Thursday night.

As was the case with their first-round series vs. the Guelph Storm, the Rangers have split the first four games of their series, 2-2, with Game 5 set for tomorrow night, April 13 at 7:30pm at The Aud.

Tickets to Game 5 (Home Game “G”) are on sale now with purchase options listed below.

The five goals were the most goals allowed in a game by the Sarnia Sting since Game 1 of Round 1 vs. the Windsor Spitfires when they were defeated 6-2.

The Sting led just once when they opened the scoring in the opening moments of the first period. The hosts twice fought back to tie the game after the Blueshirts took leads, but they failed to find the scoresheet in the third period as the Rangers skated to the road win.

Givani Smith, Kole Sherwood and Connor Bunnaman each notched a goal and an assist in the win, while Logan Brown also stood out with a pair of assists. Austin McEneny and Jonathan Yantsis were the other goal scorers for the Rangers, who earned their second road win of the playoffs.

Mario Culina made 33 saves to earn the win in goal for Kitchener, while Justin Fazio allowed five goals on 32 shots and suffered the loss in goal for Sarnia.

Connor Schlichting gave the Sting a 1-0 lead just 2:07 into the game, assisted by Drake Rymsha and Jonathan Ang, but the visitors would soon answer back.

Sherwood continued his goal-scoring potency, potting his 10th of the playoffs at 5:14 to make it a 1-1 game, assisted by Brown and Adam Mascherin.

Just 2:40 later it was the Rangers with the lead, as McEneny’s shot from the point beat Fazio to make it 2-1 Kitchener, assisted by Sherwood at 7:54 to round out first period scoring.

Shots on goal through the opening frame were tied, 7-7.

Midway through the period the hosts would tie things up, 2-2, as Brayden Guy scored his first playoff goal, from Nick Grima, at 9:56.

The Rangers continued to get secondary scoring depth as Yantsis potted his third of the playoffs at 14:34 from Jack York to put the Rangers up 3-2, but only eight seconds later the lead evaporated as Jordan Kyrou scored his first of the playoffs (while a goaltender was in net) to make it 3-3 at 14:42 from Jordan Ernst and Adam Ruzicka.

The game entered the second intermission deadlocked 3-3, with shots favouring the Rangers, 25-21.

At 8:03 of the third period the game winner was scored, and it came on the stick of Smith, from Bunnaman and Garreffa.

Kitchener extended its lead to 5-3 just under two minutes later as Bunnaman etched his fourth of the postseason, from Smith and Michael Vukojevic at 10:00.

The Sting pulled Fazio with 2:38 to play in the third period, but to no avail as the Rangers held on for the two-goal lead, and eventual win.

The Rangers were 0-for-1 on the power play, while the Sting were 0-for-3 with the man advantage.

Connor Schlichting (SAR) (3), Kole Sherwood (KIT) (2), and Connor Bunnaman (KIT) (1) were selected as the Three Stars of the Game.