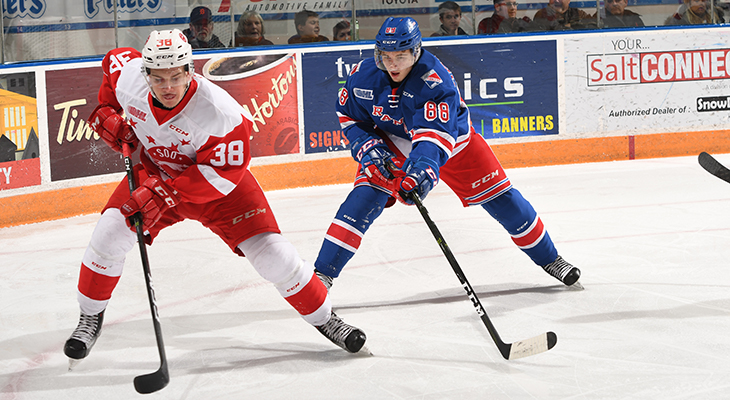 The Kitchener Rangers erased four deficits against the OHL’s top team on Friday night, but an OT dagger by a Waterloo native held the Blueshirts to a single point.

The Rangers led the Greyhounds 2-1 after the opening period, and were tied 2-2 after 40 minutes. The game would break wide open in the third period, as six goals were scored between the two teams combined in the final 20 minutes of regulation.

Zach Senyshyn led the way offensively for the Hounds, registering a hat trick. Tim Gettinger was a plus-3 and finished the night with a goal and two assists for the visitors.

For the Rangers, the power play was a key to taking the lead early and tying the game late.

The Blueshirts tallied two goals on the man advantage in the first period, then Adam Mascherin scored the 5-5 equalizer to send the game to OT with just 52 seconds left on the clock on the Rangers fifth power play opportunity of the night.

Greg Meireles, Connor Bunnaman and Frank Hora were the other goal scorers for the Rangers; Hora with the first two-goal performance of his OHL career.

Senyshyn opened the game’s scoring at the 6:03 mark of the first period as he beat Opilka for his 21st of the season, from Morgan Frost and Mac Hollowell to give the visitors a 1-0 lead.

Just over two minutes later the Rangers tied the game, with Meireles potting a power play marker at 8:05, from Darby Llewellyn and Mascherin, to make it 1-1.

Bunnaman gave the Blueshirts the lead with his 17th of the season – from Mascherin and Joseph Garreffa. That goal also came on the power play, and closed out first period scoring at 15:39.

Shots on goal through the first 20 minutes of play were 10-7 Kitchener.

The lone goal of the second period was Senyshyn’s second of the game, squaring things up at 2-2 from Colton White and Gustav Bouramman at 14:22.

Senyshyn opened third period scoring with his third goal of the game, completing the hat trick at 7:18, from White and Barrett Hayton to give the Soo a 3-2 lead.

It was just the beginning of a flurry of goals that came in the third, as Hora answered back for the home side tallying his second goal of the season, unassisted, just 47 seconds later to make it 3-3. 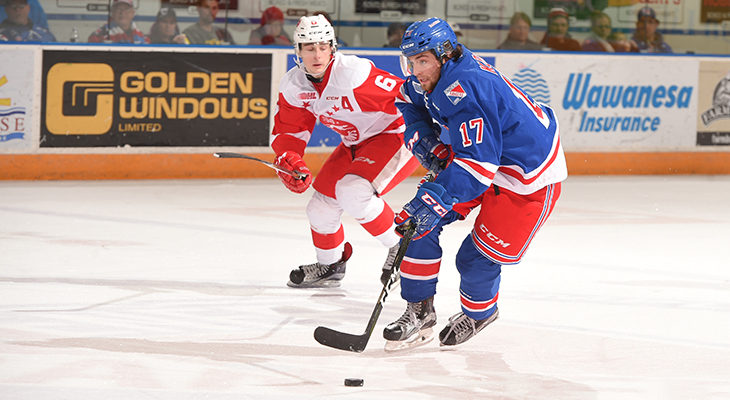 Gettinger regained a one-goal lead for the Hounds, 4-3, from Otto Makinen and Noah Carroll; in his first game with the Soo since being acquired by the Guelph Storm earlier in the afternoon.

But less than a minute later the game was tied again, and again it was off the stick of Rangers’ captain Hora, with the lone assist to Mason Kohn at 11:23 making it a 4-4 game.

While play was 4-on-4 the fifth goal of the period came, and again it was the Greyhounds taking the lead, as Katchouk tallied his 17th of the season, from Gettinger and Hollowell, to make it 5-4 at 12:32.

Again the Rangers would battle back, however, as another power play goal – this time by Mascherin – with just 52 seconds to play in regulation tied the game 5-5, assisted by Di Perna and Garreffa, and eventually sent the game to overtime.

The overtime period wouldn’t last long though, as Katchouk registered his second goal of the game just 11 seconds into the extra frame, solidifying the 6-5 win and the extra point for the visitors.

Shots on goal after regulation were 31-23 in favour of the Soo, who added one more shot (the game winner) in overtime.

Kitchener would finish 3-for-5 on the power play, while the Soo was 0-for-4 on the man advantage.

Prior to the game, the Rangers acknowledged the passing of Kitchener native and former NHL great, Milt Schmidt, who passed away Wednesday at the age of 98.

The team also presented awards to two participants of the 2017 IIHF World Junior Championship, Greyhounds forward Blake Speers who skated with Team Canada and earned a silver medal, and Rangers forward Jeremy Bracco who returned to Kitchener with a gold medal as a member of Team USA. Speers was not on hand, so the award was accepted on behalf of Speers by his teammate and former Rangers forward, David Miller. 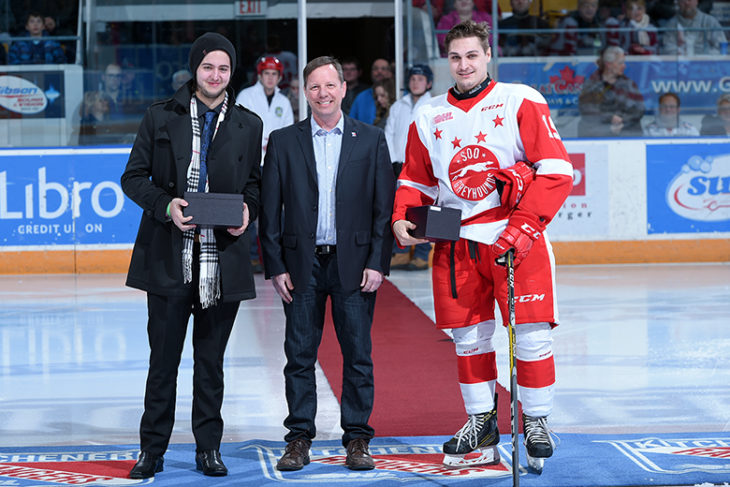 The Rangers finish the weekend with a trip to the Bayshore to take on the Owen Sound Attack on Sunday, January 8th at 2pm. They’re on the road in Erie (Jan. 10) and Windsor (Jan. 12) before returning back home to the Aud to host the Barrie Colts for the lone time this season on Friday, January 13th at 7:30pm.