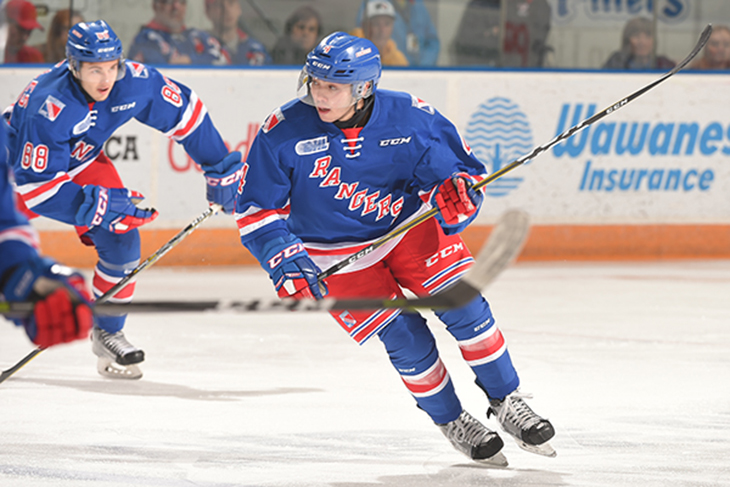 Make it another four-point night for No. 4.

Joseph Garreffa registered four assists for the second time in less than two weeks to help the Kitchener Rangers (16-9-2-0) rally to a 5-4 win over the Owen Sound Attack (13-10-0-2) in front of 2,829 fans at the Harry Lumley Bayshore Community Centre on Wednesday night.

Adam Mascherin also played a major role, as the Rangers leading point-getter increased his output with a three-point night; a pair of power play goals and an assist.

Luke Richardson didn’t start the game in goal for the Rangers but he certainly played his part in the victory by earning his ninth win of the season.

Chris McGonigle started the game but was pulled after allowing three goals on 14 shots. Richardson entered the game at 37:11 and turned aside 17 of 18 shots to improve his record to 9-7-1-0.

Mascherin gave the Rangers the first lead of the game at 4:39 of the first period; a power play goal assisted by Sherwood and Garreffa.

Mascherin’s marker snapped a five-game skid in which the Rangers had surrendered the game’s opening goal.

It was the lone goal of the first period, which saw Kitchener outshoot Owen Sound, 11-5.

Less than a minute into the second period the Rangers were awarded an opportunity with the man advantage as Jonah Gadjovich was called for clipping Connor Hall, but it was the Attack who capitalized on a Kitchener turnover in the visitor’s end. Nick Suzuki made it a 1-1 game after poking in his own rebound on McGonigle’s blocker side, assisted by Ethan Szypula, at 1:44.

Approaching the midway point of the period Hall was taken into the boards below the Owen Sound goal and was helped off the ice favouring the upper body. He did not return. Minutes later, the Rangers were called for interference and were forced to kill a penalty, already down a defenceman.

Not only were the Rangers successful on the kill, but second later Greg Meireles skated the puck down the ice and into the offensive zone, eventually beating Daniels to give the Blueshirts a 2-1 lead. Garreffa earned his second point of the night with the lone assist on the goal at 10:46.

A booming hit by Mike Petizian on Aidan Dudas at centre ice caused a rise out of the crowd, but on the same play the Attack elicited an even bigger roar as Luke Beamish collected the puck from Dudas, found Maksim Susko with a pass into the slot, who then tricked McGonigle to tie the game, 2-2, at 15:52.

Just 1:19 later the Attack took their first lead of the night as Sean Durzi scored a goal which looked eerily similar to that of Suzuki; in tight on the blocker side of McGonigle to go up 3-2 at 17:11, assisted by Gadjovich.

McGonigle was pulled in favour of Richardson following the Attack’s third goal.

The Attack took the 3-2 lead into the second intermission with the Rangers maintaining their lead on the shot clock, 19-15.

Chase Campbell scored the third straight goal for the home team just 1:32 into the third period to put the Attack up 4-2, from Dudas and Sushko, but from there on out it was the Rangers who took control.

Mascherin’s second goal of the game – and second power play marker – brought the Rangers to within one, 4-3, at 4:31 from Garreffa and Connor Bunnaman. The assist extended Bunnaman’s point streak to seven games (3G, 5A).

The Attack thought they regained a two-goal lead, making it 5-3 with a power play goal of their own, but the goal was called back as the play was ruled to be offside.

Instead, Kitchener continued to press as Hugg scored in his second straight game to tie things up, 4-4, from Giovanni Vallati and Garreffa at 10:19. This goal was also reviewed, but would stand.

The game winner came just 1:52 later, as Sherwood tallied his 10th goal of the campaign, from Mascherin and Hugg, to give the Rangers the 5-4 lead.

The Attack would pull Daniels with 1:20 to play in favour of an extra attacker in an attempt to tie the game, but to no avail.

The Rangers were 2-for-5 on the power play while the Attack were 0-for-4 while on the man advantage with a shorthanded goal.

The Rangers finally return home to The Aud to host the Attack in the second of a home-and-home series on Friday, December 1 at 7:30pm.

all news Alumni
A doctor’s journey from East Ave. to the West Coast
17 hours ago