Rangers explode for 10 goals in Game 5 trouncing of Storm 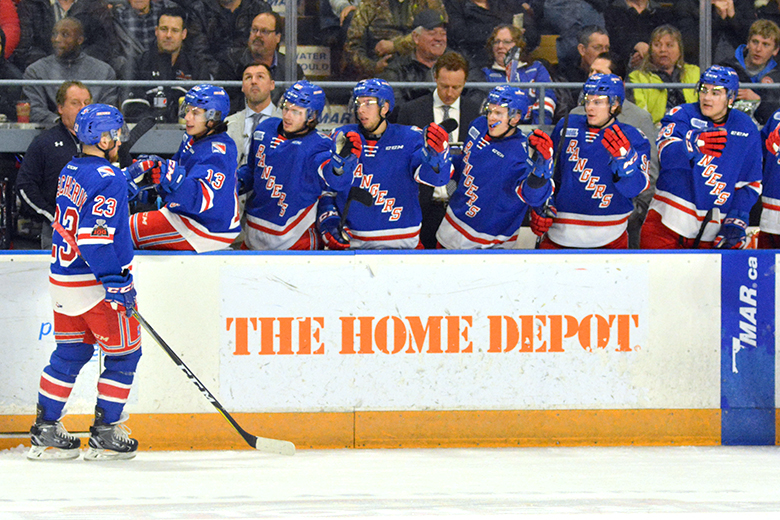 It was one of those games you could have awarded the Kitchener Rangers about a half dozen Stars. They’d end up settling for three, and an overwhelming 10-2 win over the Guelph Storm in front of 6,593 fans at The Aud in Game 5 on Friday night.

The Rangers now lead the best-of-seven series, 3-2, with the chance to clinch on Sunday afternoon at 2pm in a game that will be nationally televised on Sportsnet 360 from the Sleeman Centre.

It was total dominance by the Blueshirts, who peppered 39 shots on goal through 40 minutes of play and would finish the night outshooting the Storm by a 49-34 margin.

Kole Sherwood (2G, 1A) was one of three Rangers who had two-goal outings on Friday night, which put him into a tie for the league lead in playoff goals (7) with the Bulldogs’ Brandon Saigeon.

Connor Bunnaman (2G, 1A) and Jonathan Yantsis (2G) also scored two goals each for Kitchener in the win, while Rickard Hugg and Riley Damiani each had a trio of assists. Joseph Garreffa tallied a goal and an assist while Giovanni Vallati added two helpers to pace the Kitchener attack.

While the Rangers skated to their leads of 3-0 after one period of play and 7-1 after two, goaltender Mario Culina provided a phenomenal outing in goal – especially in the early stages. He would finish the night surrendering just one goal and making a number of high-quality saves, turning aside a total of 32 shots.

Anthony Popovich took the loss in goal for the Storm, allowing seven goals on 39 shots through 40 minutes of work. Backup Nico Daws came in to start the third period and surrendered three goals on 10 shots.

Sherwood opened the game’s scoring at 6:01 of the first period, from Brown and Givani Smith to give the Rangers the 1-0 lead.

A minute-and-a-half later it was 2-0 Rangers, as captain Bunnaman scored his first of the playoffs, from Garreffa and Mascherin, at 7:29.

As the period was winding down Mascherin picked up his first of the night, from Bunnaman and Damiani, at 17:33 to round out period scoring with the Rangers up 3-0.

Shots on goal through the first period of play were 17-11, Kitchener.

The scoring continued for the home side when the puck dropped for the second period as Mascherin tallied his second of the night – and third of the playoffs – to put the Rangers up 4-0, unassisted, at 1:35.

Sherwood’s second of the game and seventh of the playoffs extended the Kitchener lead to 5-0 on the power play, from Austin McEneny and Vallati at 9:45.

The Rangers were whistled for a penalty of their own and would kill it off, but just two seconds later the Storm converted as Zach Poirier, from Liam Hawel and Keegan Stevenson, made it 5-1 Kitchener at 13:18.

Before the period was out the Blueshirts would add another pair to pad their lead, as Bunnaman notched his second of the game at 18:36, from Sherwood and Damiani, to make it 6-1.

It was 7-1 Kitchener when Yantsis scored with 2.6 seconds left on the clock, with Hugg picking up the lone assist.

Nearing the seven-minute mark of the period, the Storm were awarded an extended 5-on-3 power play and they would capitalize. Isaac Ratcliffe, from Garrett McFadden and Dmitri Samorukov, cut the Kitchener lead to 7-2 at 7:22.

The plethora of penalties continued, as both teams found themselves serving a pair of minors with 3-on-3 action ensuing.

The Rangers weren’t done there, as Mascherin tallied his third of the game on the power play to put the Rangers up 9-2, from Hugg and Vallati, at 15:42.

Game scoring rounded out with Yantsis’ second goal of the game, assisted by Adam Liska and Hugg, at 18:52.

The Rangers were 2-for-8 on the power play, while the Storm were 1-for-6 with the man advantage.

all news community
Tickets are still available to catch the first-place Rangers in action!
7 hours ago