Rangers explode with five-goal second period in win over Wolves 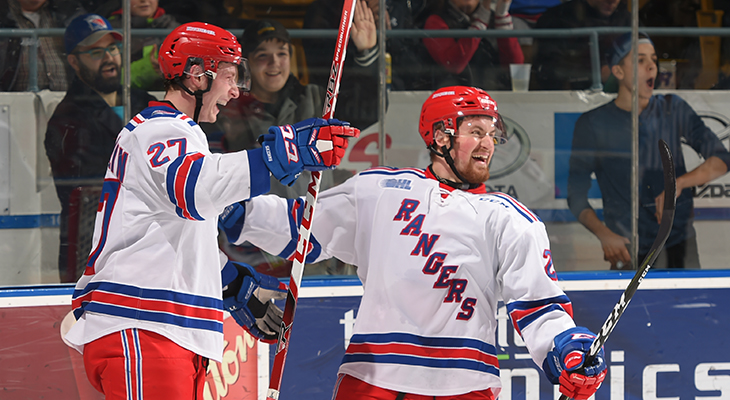 The Kitchener Rangers gave their fans an early Christmas present in their final home game before the holiday break on Friday night.

The Rangers led 2-0 after one period of play and 2-1 shortly into the middle frame, but broke the game open with five unanswered goals in the second period. The five second period goals tied a season high by the club, which was previously set the last time the Rangers and Wolves met back on October 2nd in Sudbury.

The regular season series between the Eastern and Western Conference opponents is now complete, with the Rangers having outscored the Wolves 17-6 in the two games.

Luke Opilka (4-4-0-0) earned the win in goal for the Rangers, needing just 13 saves for the victory.

Zack Bowman (8-11-1-0) started for the Wolves, who arrived just 1h 06 prior to puck drop due to getting caught in traffic coming from Mississauga. Bowman surrendered seven goals on 34 shots through the first 40 minutes of play and took the loss. Jake McGrath stood in for the final frame and allowed one goal on eight shots.

Adam Mascherin led the way offensively for the Blueshirts, potting a five-point night with a pair of goals and three assists.

Joseph Garreffa was also highly effective for the home side, tallying two goals and adding an assist to help guide the Rangers to the win.

Jake Henderson, Darby Llewellyn, Dylan Seitz and Nick McHugh (SH) were the other goal scorers for the Rangers, who scored half of their eight goals on the night while on special teams. For McHugh, it was his eighth goal of the season – and fourth shorthanded.

The Rangers opened the scoring on the power play, as Seitz tallied his seventh of the season on a back door tip-in from Giovanni Vallati. Mascherin picked up the second assist on the goal at 8:53 of the first period to give Kitchener a 1-0 lead. Before the period was out Garreffa would make it 2-0, after commanding the play in the corner then wiring a shot top corner over the left shoulder of Bowman. Riley Damiani and Frank Hora earned the assists on the goal, which came at 14:55 and rounded out first period scoring.

Shots on goal in the first period of play were 20-3 in favour of the Rangers.

The Wolves got on the board shortly into the middle frame as David Levin made it 2-1, from Dmitry Sokolov and Liam Dunda, at 1:14.

McHugh would restore the Rangers two-goal lead at 8:21 with his fourth shorthanded goal of the season, unassisted.

It would begin a second period onslaught for Kitchener, who would follow up McHugh’s tally with four more goals before the period was out.

Mascherin scored the Rangers second power play marker of the night at 11:28, from Dylan Di Perna and Garreffa, to make it 4-1, then just 15 seconds later it was 5-1 from the stick of Llewellyn. Mason Kohn, the game’s Third Star, found Llewellyn wide open with a pretty pass in front of the crease. Mascherin picked up the second assist at 11:43.

At 15:19 it was 6-1 Rangers, as Garreffa scored his second of the game and the Rangers’ third power play goal of the night, from Connor Bunnaman and Mascherin.

Period scoring was rounded out by Henderson’s fourth of the season at 17:00. Doug Blaisdell picked up the lone helper in his return to the lineup after missing 15 games due to injury.

After 40 minutes of play, shots on goal were 34-6 Kitchener, including 14-3 in the second period.

Mascherin picked up his fifth point of the night with his second goal of the game, and 24th of the campaign, making it an 8-1 game at the 3:00 mark of the third from Kohn and Llewellyn.

The Wolves would add two more to the board before the game was out, as Sokolov made it 8-2 from Levin and Ryan Valentini at 18:47, then Owen Gilhula scored his second of the season to make it 8-3. Owen Lalonde and Aiden Jamieson picked up the assists on the game’s final goal which came with 25 seconds left to play.

Third period shots on goal were 10-8 Sudbury, and finished 42-16 in favour of Kitchener.

Kitchener was 3-for-5 on the power play with a shorthanded goal, while Sudbury went 0-for-4 with the man advantage.

The Rangers play their final game before the holiday break tomorrow, Saturday, December 17 when they take on the Guelph Storm at the Sleeman Centre at 2pm. They return to action after the break when they travel to the WFCU Centre to face the Windsor Spitfires on Thursday, December 29 at 7:05pm.

Their next game back home at the Aud is Friday, December 30 when they host Midwest division rival, the Owen Sound Attack, at 7:30pm.