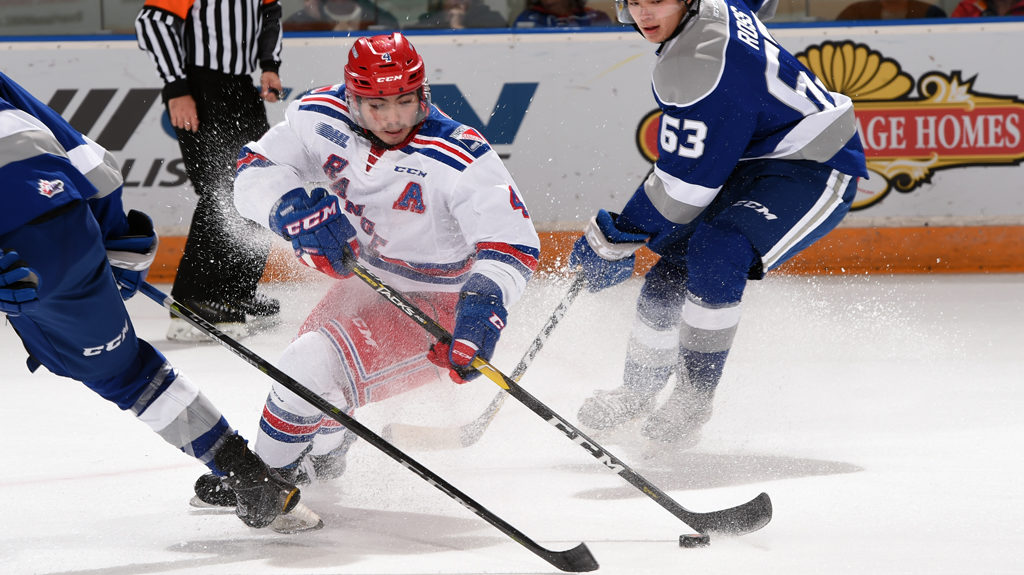 In his first game of the season, goaltender Lucas Pfeil opened the game looking sharp, stopping 12 in the first including some key saves during an Eric Guest tripping penalty at 14:22.

At 8:51 of the opening twenty, Jack York buried his first of the season on a shot from the blue line with Joseph Garreffa and Michael Vukojevic picking up the assists on the play.

Garreffa went into the night with a six-game point-streak that included four goals and five assists, which also had him as the top scorer for the boys in blue.

Sudbury’s Cole Candella took an interference penalty in front of the net at 18:59 that sent the Rangers to the powerplay and despite a few good chances, the period ended with the Rangers up one.

The second period started with a bang for the Rangers with Riley Damiani firing home his third of the season just 14-seconds into the frame to put Kitchener up two. Garreffa picked up his second helper of the night and Guest got his fifth assist of the season, and fourth in the past two games.

Despite Pfeil’s acrobatics in net, a Darian Pilon goal at 12:51 brought the Wolves within one making it 2-1. The pressure from Sudbury was relentless during the second-half of the middle period and shortly after Kirill Nizhnikov served his tripping penalty, he shot home his second of the season at 15:10 to knot the game up at two. The second ended with the game tied but the Wolves pulled away in shots, leading 26-22.

The third period featured a lot of back-and-forth play with the Rangers nearly capitalizing on a few chances had it not been for some solid goaltending from the Wolves’ Ukko-Pekka Luukkonen and help from the crossbar. Ultimately, the period ended in a stalemate and the game headed to overtime.

Unfortunately for Rangers, overtime ended just fifty-two-seconds in on a goal by Blake Murray to end the Rangers Thanksgiving weekend with one win and two overtime losses. Kitchener has yet to lose in regulation this season.

Cole Candella was the game’s third star, Garreffa was the second star, and Murray, with the game winner, picked up first-star honours.