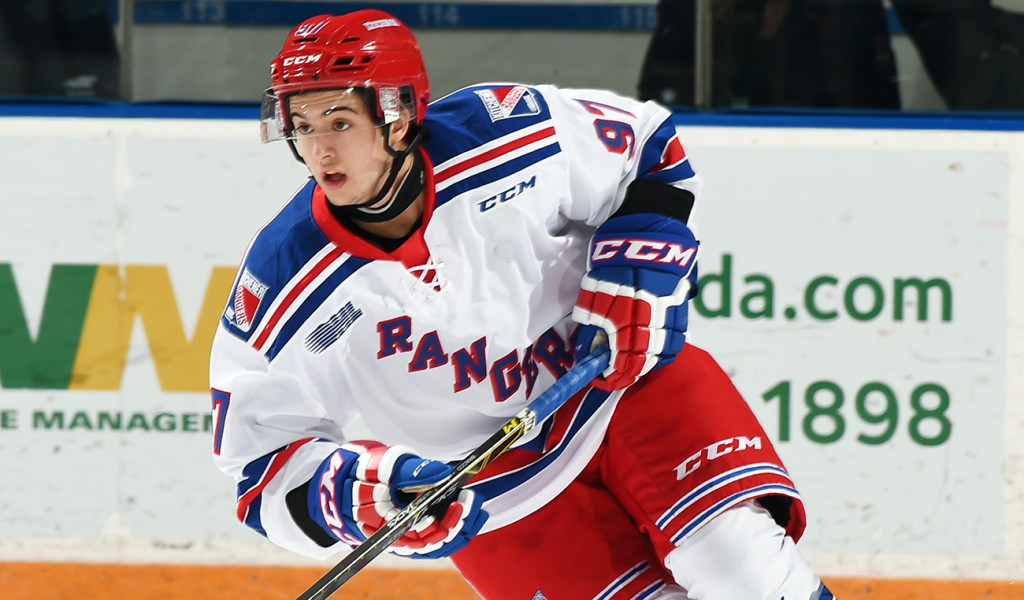 The Kitchener Rangers and Windsor Spitfires will meet one week from tonight in Game 1 of their Western Conference best-of-seven quarter-final series, but first, they would meet for the fourth and final time this regular season.

Logan Brown had a goal and two assists, while Christian Fischer tallied a pair of goals for the hosts, who scored just 17 seconds into the game and led 2-1 after one period of play, then 5-3 after two.

The Spitfires took three one-goal leads only for the Rangers to answer back and tie the game each time before Gabe Vilardi and Mads Eller’s goals just eight seconds apart gave the hosts their first two-goal lead of the night – a lead they would not relinquish.

Mario Culina (11-6-1-0) picked up the win in goal for the Spitfires, allowing four goals on 31 shots. Luke Opilka started in goal for the Rangers and was handed the loss (27-10-3-2), surrendering five goals on 18 shots before Dawson Carty came in to start the third period, stopping all seven shots he faced.

Darby Llewellyn and David Miller each notched a goal and an assist for the Rangers, who will host the Spitfires in Game 1 of their opening round series next Thursday, March 24th at 7pm at the Aud. Jeremy Bracco chipped in with a pair of assists on what was the winger’s 19th birthday.

The Spitfires opened the scoring just 17 seconds into the game on a goal by Brown, his 20th of the season, from Jalen Chatfield and Cristiano DiGiacinto.

The Rangers would respond when Llewellyn registered his 21st of the season, from Miller and Elijah Roberts, tying the game 1-1 at 4:13.

With the Spitfires on the power play, Mikhail Sergachev found the back of the net to regain the lead for his team 2-1, assisted by Cole Carter and Brown at 15:07.

The Spitfires would take the 2-1 lead into the first intermission with shots tied 8-8 apiece.

Bracco would find Miles Liberati who broke in alone and beat Culina five-hole to make it a 2-2 game at 6:31 of the second period, with Llewellyn picking up the second assist.

With each team taking coincidental two-minute minors, Fischer once again gave the Spitfires the lead, from Brown and Logan Stanley, at 13:43. But once again the Rangers would respond, this time with a four-on-four goal of their own as Dylan Di Perna tallied his fifth goal of the season, from Bracco and Brandon Robinson, less than a minute later at 14:40.

The Spitfires would take their fourth lead of the night on a goal by Vilardi, assisted by Carter and Aaron Luchuk at 17:19, then took their first two-goal lead just eight seconds later.

After winning the draw at centre ice, the hosts took the puck back into the Rangers zone and capitalized on a deflection into the Kitchener goal off the foot of a Blueshirt defender. Eller would get credit for the goal, from Sergachev and Hayden McCool, at 17:27.

Carty would start the third period in goal for the Rangers after Opilka made 13 saves through the first 40 minutes.

Miller tallied his 13th goal of the season at 11:43, assisted by Doug Blaisdell and Joseph Garreffa, to cut the Windsor lead to 5-4.

With 1:35 to play Fischer would pick up his second goal of the game into an empty net, unassisted, to solidify the 6-4 Windsor win.

Final shots were 31-26 Kitchener, who also outshot the Spitfires 11-8 in the final period of play.

The Rangers finished the night 0-for-1 on the power play, while the Spitfires were 1-for-4 with the man advantage.

Mads Eller (3), Darby Llewellyn (2) and Logan Brown (1) were chosen as the Three Stars of the Game.

The Rangers return to the Aud for their final home game of the regular season on Friday, March 18th when they host the Sarnia Sting at 7:30pm for Fan Appreciation Night, then finish off the campaign on the road on Saturday, March 19th in Owen Sound vs. the Attack at 7:30pm.