Rangers get offensive juices flowing in big win over Sting 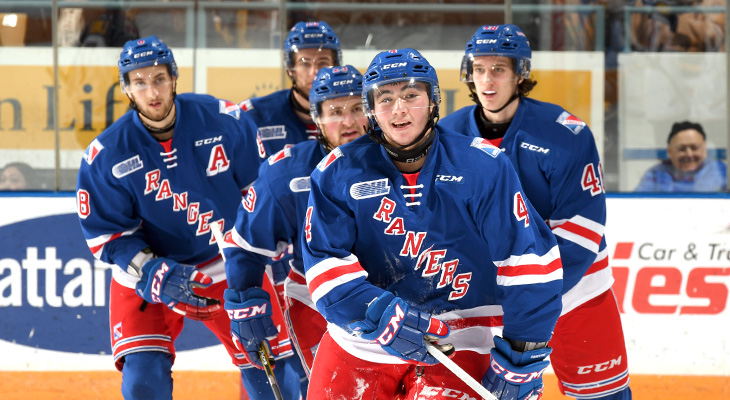 The Kitchener Rangers won’t play their next game at the Aud until February 23rd, but they sure gave their home fans something nice to remember them by while they’re gone.

The sixth-place Rangers (62 points) expanded their lead in the Western Conference standings over the seventh-place Sting (56) to six points, while Sarnia will now be left to nervously await the results of tonight’s meeting between the Windsor Spitfires and Flint Firebirds. The eighth-place Firebirds sit just one point back (55) of the Sting, with a game in hand, and could leapfrog Sarnia in the standings with a win.

Luke Opilka (11-13-1-1) returned to the win column Sunday, needing just 20 saves for his eleventh victory of the season.

The Rangers were firing on all cylinders offensively, as 14 skaters etched the scoresheet with at least a point. Seven Blueshirts would finish the game with a multi-point performance.

Among those with multi-point games was Adam Mascherin, who registered the first four-assist game of his OHL career. Joseph Garreffa and Greg Meireles each had two-goal games, while Giovanni Vallati had a trio of second-period assists.

It was actually the Sting who jumped out to a 1-0 lead, which they maintained through the first intermission. They also led 2-1 in the second period, but the Rangers pressed with four straight goals and never looked back.

Filip Helt opened the scoring for the Sting, giving the visitors a 1-0 lead with his third goal of the season from Jordan Kyrou and Jeff King at 9:09 of the opening frame. The assist for Kyrou extended his current point streak to 17 games.

It was the lone goal of the first period, which saw the Rangers outshoot the Sting 10-8.

Greg Meireles wasted little time getting the Rangers on the board once the puck dropped in the second period, burying his 14th of the season to tie the game, 1-1. Adam Mascherin and Giovanni Vallati picked up the assists on the goal, which came just 15 seconds into the second period.

Helt registered his second of the game to once again give the Sting a one-goal lead, 2-1, from Brady Hinz at 7:49.

Their lead was short-lived, however, as the Rangers began to click near the midway point of the period, scoring four straight goals.

Dylan Di Perna answered back just 26 seconds after Helt’s second goal, tallying his 7th of the season after banking in a Mascherin rebound to make it a 2-2 game at 8:15. Vallati picked up the second assist.

The Rangers picked up their first lead of the afternoon on the stick of their captain, as Frank Hora notched his 4th of the season, firing a wrist shot from above the hash marks to beat Fazio and give Kitchener a 3-2 lead at 12:30.

Just over three minutes later it was Joseph Garreffa who brought about a roar from the Kitchener crowd, skating in on a breakaway and finding the back of the net, top blocker-side, to make it 4-2 Rangers at 16:04. Di Perna picked up his second point of the afternoon with the secondary assist, while the primary assist to Vallati was the rookie rearguard’s third point of the period.

The fourth straight goal by the Rangers was the second of the game for Meireles, who finished off a pretty passing play from Cole Carter and Mascherin to give his team a 5-2 lead just 27 seconds later at 16:31.

But it was the Sting’s turn to respond, as 30 seconds after Meireles’ second, Sean Josling hushed the crowd with his ninth of the season from Franco Sproviero, cutting the Rangers lead to 5-3 at 17:11.

Before the high-scoring middle frame was out the home team would strike again, as Garreffa potted his second of the game and 19th of the season, from Carter and Mascherin – his fourth point – with 43 seconds to play in the period.

Eight total goals were scored in that second period, which saw the Rangers outshoot the Sting 18-6 and 28-14 after 40 minutes.

Connor Bunnaman inched closer to a 30-goal season with his 28th of the campaign, batting the puck out of mid-air to the right of Fazio to make it 7-3 Rangers, from Jake Henderson and Hora, at 2:13.

Eric Guest got on the board with his second goal of the season, burying a nice feed from linemate Cedric Schiemenz to make it an 8-3 game at 6:26, with Dylan Seitz picking up the second assist.

A power play marker by the Sting’s Adam Ruzicka with 1:50 to play rounded out the game’s scoring, 8-4.

Kitchener was 1-for-4 on the power play, while Sarnia was 1-for-1 with the man advantage.

Dylan Di Perna and Llewellyn each wore an “A” and skated as alternates to Rangers captain Frank Hora.

The Rangers are back in action on Friday, February 17th when they take their northern swing and face off against the Soo Greyhounds at 7:07pm. On Saturday, February 18th they’re in Saginaw to take on the Spirit at 7:07pm. They play their third straight on the road when they visit Dawson Carty and the Hamilton Bulldogs on Family Day Monday, February 20th, at 2pm.

The Blueshirts are back home on Thursday, February 23rd when they host division rival, the Owen Sound Attack, at 7pm.