Rangers hold end of season Awards Ceremony at the Aud 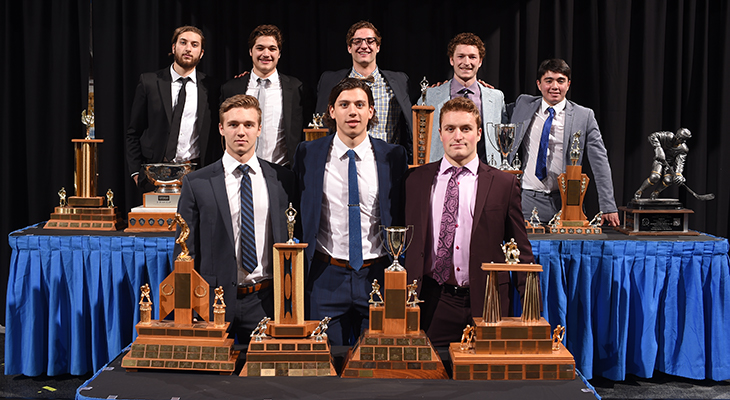 The Kitchener Rangers officially closed out the 2016-17 season with their annual Rangers’ Awards Ceremony tonight at the Dom Cardillo Arena of the Kitchener Memorial Auditorium.

Leading the way were Dylan Di Perna and Adam Mascherin, who took away three awards apiece.

Di Perna was named Best Offensive Defenceman, Humanitarian of the Year and Best Performer in the Playoffs while Mascherin was awarded the Three Star Award, Team Scoring Leader, and Most Valuable Player.

Seven other Rangers’ earned awards, including Darby Llewellyn for Outstanding Team Effort; Greg Meireles for Rookie of the Year; and Joseph Garreffa for Most Improved Player.

Rangers’ captain Frank Hora was named the winner of Best Defensive Ability for the third year in a row – the first time in team history a player has won the award in three consecutive seasons.

The Rangers’ four graduating players; Luke Opilka, Jake Henderson, Andrew Burns and Doug Blaisdell were each presented rings and their jerseys from this season, while overagers Di Perna, Llewellyn and Hora were presented with their captain’s jerseys, as well as a commemorative frame including photos of their time in a Rangers’ uniform along with a copy of the official game sheet from their first OHL game.

Head coach Jay McKee was also presented a special frame of photos and the official game sheet from his first win as a coach in the OHL by the three overagers.

The Charles Chalkin Memorial Award for Best Performer in the Playoffs is named after former Rangers’ director from the late 1960’s/early 1970’s, Charles Chalkin.

Each time a player is chosen as 1st, 2nd or 3rd Star, points are given to the player and accumulated at the end of the regular season. Mascherin was named 1st star, six times; 2nd star, 12 times; and 3rd star, once.

The Herchenrader Family Trophy for Best Defensive Ability was donated by former director Alfred Herchenrader, his father Jake and their family.

Likability, respect, inspiration, and leading by example – these are just a few of the qualities that have belonged to the Rangers’ Most Popular Player – as voted on yearly by his teammates – over the years.

The Jim McGeachie Memorial Trophy is named in honour of former left winger Jim McGeachie, who passed away suddenly in a car accident in the summer of 1980 at the age of 19 while a member of the Rangers.

The Ted Scharf Humanitarian Award, sponsored by the Kitchener Sports Association, follows the KSA motto of “True Sportsmen Make Good Citizens.” This award is in recognition of the Rangers player who contributed most to our community during the regular season.

The Michael Pappert Memorial Trophy, named after a former Rangers director from the 1960’s, acknowledges the efforts, accomplishments and great strides made by one of the Rangers rookies during the past season.

The Jim Reilly Trophy for Team Scoring Leader is named after Rangers’ past director, Jim Reilly.

Presented to the player who best embodies the sportsmanship and respect for the game in true Rangers fashion.

The Jim Malleck Memorial Trophy for Most Valuable Player is named after former Director and Past President through the 1960’s and into the 1970’s, Jim Malleck.

The Channer’s Best Dressed Player was determined by the fans in an online contest from January – March this season.

Rangers’ players visited Channer’s Men’s Apparel in Uptown Waterloo, selected their own outfits, and took part in a photo shoot in-store. The players were split into five groups where fans would vote for their favourite player or favourite look.

The finalists of each group (Dylan Seitz, Jake Henderson, Frank Hora, Darby Llewellyn and Jonathan Yantsis) faced off in the final, where Yantsis collected more than 80,000 votes to come away as champion.

Each finalist was awarded a $250 gift card to Channer’s, while Yantsis took home $1,000 for being named a finalist, and also winning the contest.