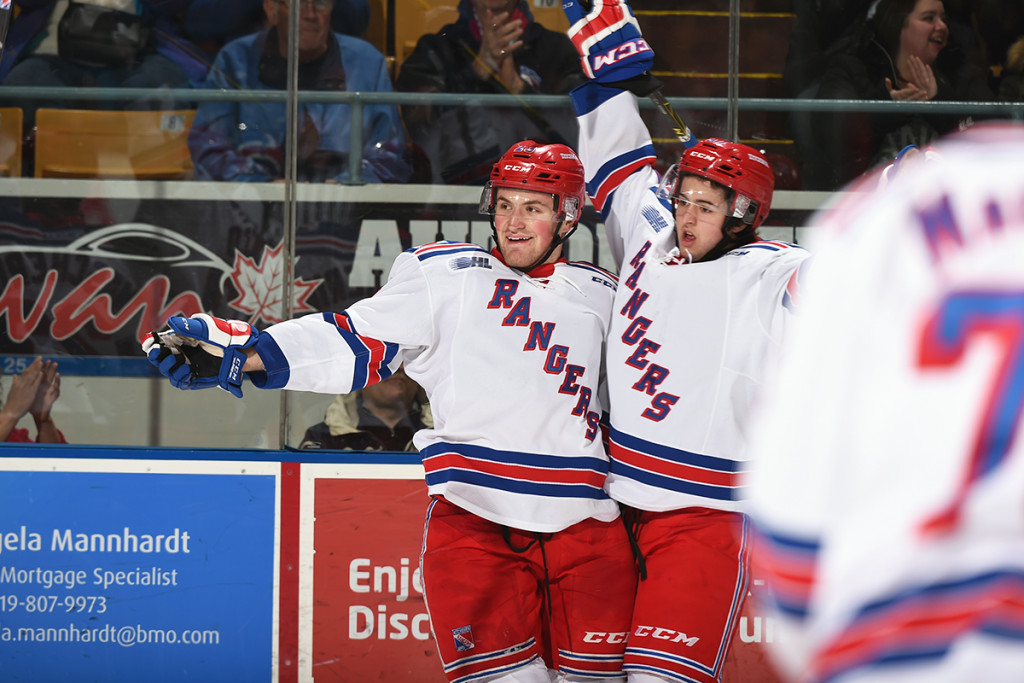 The Kitchener Rangers penalty kill on home ice going into Friday night was ranked 13th in the OHL. After Friday night, that ranking is going up.

The Rangers were perfect on the PK, killing a hefty ten penalties dealt their way as the home team defeated the visiting Ottawa 67’s 5-1 in front of 7,119 fans at the Kitchener Memorial Auditorium Complex.

Kitchener (21-3-3-0), despite 12 infractions and 25 minutes worth of penalties handed their way, didn’t let that stop them from finding the back of the net, as they scored twice in each the second and third periods.

Not only were the Rangers spectacular on the penalty kill during the game, they were also potent when it counted on the power play. Adam Mascherin scored twice on a Dante Salituro double minor in the second period giving the Rangers their first and only lead they would need as they’d finish 2-for-5 with the man advantage.

Jeremy Bracco had a goal and an assist for the home side, while four other Rangers had a pair of assists each (Mason Kohn, Ryan MacInnis, Miles Liberati, Nick McHugh).

The 67’s opened the scoring on a goal by Ben Fanjoy from Connor Graham and Ryan Orban at 8:58 but the lead was shortlived, as Bracco potted his fifth goal of the season just 29 seconds later from Kohn and MacInnis to tie the game 1-1 at 9:27.

After Salituro was dealt the double minor for spearing, Mascherin gave the Rangers their first lead of the night at 5:23 of the second period, assisted by Bracco and Liberati. The point was Liberati’s first as a member of the Rangers since being acquired in a trade with the North Bay Battalion on Monday.

With the first penalty negated and the second minor remaining, the Rangers capitalized again – another power play goal by Mascherin – to give the home team a 3-1 lead at 8:13 from MacInnis and Liberati.

The Rangers two power play goals on the night will contribute another $200 to Clarky’s Kids on behalf of Heffner Toyota, who has generously agreed to donate $100 for every Rangers power play goal scored on home ice this season.

David Miller scored his second goal in as many games at 7:31 of the third period from McHugh and Kohn to give the Rangers a 4-1 lead. They’d make it 5-1 at 17:14 when Jacob Cascagnette scored into an empty Ottawa net, assisted by McHugh and Elijah Roberts.

Final shots on goal were 37-29 in favour of Kitchener.

MacInnis, Brandon Robinson and Frank Hora each wore ‘A’s and skated as alternate captains for the game.

Liberati (3), MacInnis (2) and Mascherin (1) were chosen as the Three Stars of the Game.

The Rangers are back in action on Tuesday, December 8th when they host the Guelph Storm at 7pm for Teddy Bear Toss Night. You can find more information on the game here.

Tickets for Tuesday, and other future Rangers home games, are available online at kitchenerrangers.com, by calling Centre in the Square, or through The Aud Box Office.