Rangers muster a point in 51-shot effort versus Fazio, Sting. 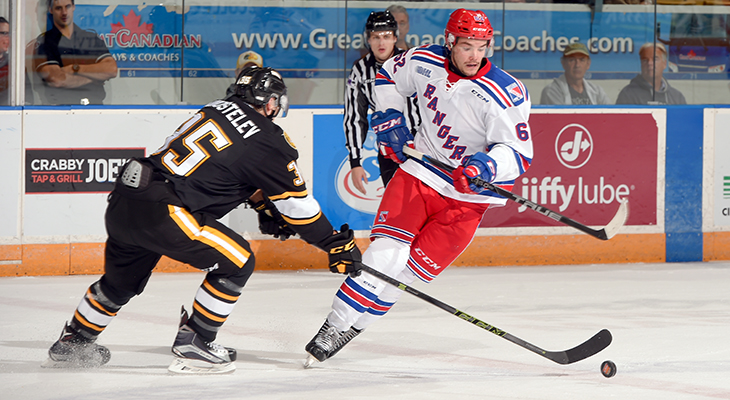 Plain and simple, Justin Fazio was the key in allowing the Sarnia Sting (4-1-1-0) to win a game the shot clock said they had no business winning.

Fazio was on the receiving end of 51 Kitchener Rangers shots on goal and stopped 46 of them, guiding the Sting to a 6-5 shootout win over the Rangers (3-0-0-1) in front of 6,763 fans at the Kitchener Memorial Auditorium Complex on Friday night.

Fazio was called on early and often to keep the Sting in the game, as the Rangers sent 24 shots his way in the first period alone, 45 after the second.

Dawson Carty started in goal for the Rangers and was saddled his first shootout loss of the season, allowing five goals on 29 shots.

Nikita Korostelev led the way offensively for the Sting, tallying a pair of goals and assist while also scoring one of the game clinching goals in the shootout. Brady Hinz also had a three point effort with a goal and two assists for Sarnia, who trailed three times on the night but battled back to earn the extra point.

Despite the loss there were plenty positives for the Rangers on Friday night, one being the return of Jeremy Bracco to the lineup. Bracco wasted no time earning his first point of the season, just over five minutes into the game setting up Adam Mascherin for his first goal of the season. The two would finish the night each with a three-point effort; a goal and two assists.

Jacob Cascagnette had the first two-goal performance of his OHL career, and Doug Blaisdell and Giovanni Vallati each chipped in with a pair of assists from the back end.

The Rangers took a 1-0 lead just 5:11 into the first period with Mascherin’s first goal of the season, from Bracco and Blaisdell, at 5:11. It was the first time this season the Rangers scored the opening goal of the game.

The Rangers controlled the majority of the pace of play in the opening frame, outshooting the Sting 14-2 at the midway point of the period. But with the Sting buzzing in the final five minutes, they potted the equalizer from the stick of Sean Josling – his first career OHL goal – from Franco Sproviero and Kelton Hatcher at 16:46.

Kitchener continued to press, however, and with just 27 seconds to play in the first period they regained the lead. Greg Meireles extended his team lead in points with his second goal of the season, assisted by Nick McHugh and Connor Bunnaman at 19:33, to make it a 2-1 game.

First period shots were 24-10 in favour of Kitchener.

The Sting would tie the game seven minutes into the second, as Korostelev tallied his first of the game, assisted by Hinz and Jordan Kyrou, to make it a 2-2 game at 7:06.

Down 4-2 and being outshot by more than a 2:1 margin, the Sting again battled back. They would cut the Rangers lead to one, 4-3, just 15 seconds following Cascagnette’s second goal when Hinz scored his second of the season from Connor Schlichting and Korostolev at 15:27.

They climbed all the way back, making it 4-4 with just 2:02 to play in the period as Korostolev’s second goal of the night and third point rounded out period scoring at 17:57. Hinz picked up the lone assist on the goal.

The Sting took their first lead of the night on a power play goal from the stick of Jaden Lindo, from Anthony Salinitri and Kyrou, at 9:12.

The Rangers weren’t done yet however, as Bracco scored his first of the season with just 4:34 left on the clock to once again tie the game, 5-5, from Mascherin and Vallati – the Rangers’ 49th shot on goal of the night – to eventually send the game to overtime.

Sarnia took command of the third period on the shot clock, outshooting the hosts 12-5 in the third for a total of 50-29 Kitchener after regulation.

Even with a Rangers power play in the 3-on-3 overtime, the extra five minutes solved nothing and the game was off to a shootout, the first for either team this season. Kitchener mustered the lone shot on goal for either side during the overtime period.

Kitchener, who shot first, sent Joseph Garreffa and Bracco to centre ice but neither would beat Fazio. Korostelev and Kyrou each scored to give Sarnia the 6-5 victory.

Kitchener was 0-for-5 on the power play, while Sarnia was 1-for-3 with the man advantage.

Llewellyn, Di Perna, and Bunnaman each wore “A’s” and skated as alternate captains for the Rangers.

The Rangers are back in action tomorrow night, Saturday, October 8 when they make their one and only visit to the Barrie Molson Centre to take on the Colts for a 7:30pm start.

They wrap up the long weekend of three games in four days back here at the Aud when they clash with their Highway 7 rivals, the Guelph Storm, for the first time this season on Monday, October 10. Puck drop on Thanksgiving Monday is 2pm. Fans are asked to bring a non-perishable food donation with them to Monday’s game to help the Food Bank of Waterloo Region feed those in need in our community.