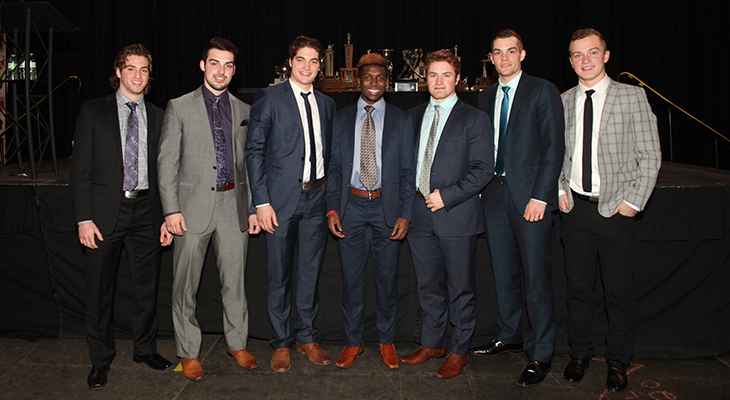 The Kitchener Rangers hosted their annual Awards Ceremony at the Aud on Saturday night.

Ryan MacInnis, Jeremy Bracco and Adam Mascherin were each multiple winners, as the night featured a total of 12 awards, along with a mixture of various video memories from the season and a Top-10 Goals of the Season Countdown.

Brian Brosnan, Miles Liberati and Brandon Robinson were also honoured at the onset of the night as the three Rangers overagers with photos and a framed game sheet of their first OHL regular season game.

The Charles Chalkin Memorial Award for Best Performer in the Playoffs is named after former Rangers director from the late 1960’s/early 1970’s, Charles Chalkin.

Each time a player is chosen as 1st, 2nd or 3rd Star, points are given to the player and accumulated at the end of the regular season.

The Herchenrader Family Trophy for Best Defensive Ability was donated by former director Alfred Herchenrader, his father Jake and their family.

Likability, respect, inspiration, and leading by example – these are just a few of the qualities that have belonged to the Rangers’ Most Popular Player – as voted on yearly by his teammates – over the years.

The Jim McGeachie Memorial Trophy is named in honour of former left winger Jim McGeachie, who passed away suddenly in a car accident in the summer of 1980 at the age of 19 while a member of the Rangers.

The Bob ‘Snowy’ Schlieman Award is presented to the Best Offensive Defenceman on the Rangers squad.

This award is in recognition of the Rangers player who contributed most to our community during the regular season.

The Michael Pappert Memorial Trophy, named after a former Rangers director from the 1960’s, acknowledges the efforts, accomplishments and great strides made by one of the Rangers rookies during the past season.

The Jim Reilly Trophy for Team Scoring Leader is named after Rangers past director, Jim Reilly.

Presented to the player who best embodies the sportsmanship and respect for the game in true Rangers fashion.

The Jim Malleck Memorial Trophy for Most Valuable Player is named after former Director and Past President through the 1960’s and into the 1970’s, Jim Malleck.